LRA, the Christian Al Quaïda of Africa, menacing the referendum in South LRA,  known as the Lord’s Resistance Army,  is a  the most bloody  War Lord Africa ever known  since  the  Mao Mao movement in Kenya in 1960’s. LRA is financed and armed by the Sudan. It is    working for the  government of  Sudan as a proxy since its inception in 1986. This is done in oppostion of the Uganda’s  support to  the  Southern Sudan Liberation Movment led  by the late  John Grang.

It was founded by Alice Lakwena initiated with witchcraft and spiritualism. In 1986  she  established LRA as a resistance movement and  claimed to be inspired by the Holy Spirit of God calling herself as  the keepers of the 10 commandment.  She portrayed herself as a prophet who received messages from the Holy Spirit of God. She wanted to  defeat the government run by Museveni by magic  casting . she ordered  her followers to  cover their bodies with shea nut oil as protection from bullets,  and invite them not to  take cover or retreat in battle, and not to kill snakes and  bees.

Joseph Kony now the leader followed her methodology by using the same superstition encouraging soldiers to use oil to draw a cross on their chest against  bullets.  Kony gained a reputation as claiming he is possessed  by holy sprit. He claim being a medium.

Alice Lakwena won many battles against Musuveni government in Kampala. several key victories on the battlefield and began a march towards Kampala. Kony seized this opportunity to recruit members of the Ugandan People’s Democratic Party (UPDA) and Holy Spirit remnants.  She was finally defeated1997  in Jinja and escaped to Kenya,  since Kony took the leadership.

The Movement has spread in all central Africa menacing the stability of the region  like Al- Qaida in Afghanistan and  Pakistan now in Yemen and Somalia. Today  LRA is menacing the coming referendum in the South bought by its masters in  the north.

August 27, 2010 (NIMULE) – The Lord’s Resistance Army could attempt to re-enter Uganda through southern Sudan according to a former aide to Uganda’s President Yoweri Museveni.

Richard Todwong, told Sudan Tribune that an attempt to re-enter Uganda via Sudan and Democratic Republic of Congo (DRC) from the LRA’s base in Central African Republic (CAR) could undermine the Southern Sudan’s quest for independence.

The former aide to Uganda’s President Yoweri Museveni said that such a move by could easily be employed as a scapegoat to destabilize the population in the south ahead of their preparations for the forthcoming referendum.

The LRA, led by Joseph Kony, has carried out a brutal insurgency across Uganda, south Sudan, CAR and DRC since 1987, has been accused receiving military assistance from the Khartoum government.

Todwong said that the LRA could easily be used as a scapegoat to destabilize the south ahead of a referendum on independence due in January.

The referendum on self-determination is a key requirement within Sudan’s Comprehensive Peace Agreement (CPA); between the dominant parties of the north and south, which ended over two-decade civil war.

“The LRA now appear to have been a forgotten force, but they may be planning to re-launch new attacks on civilians as they plan to re-enter Uganda through South Sudan or the DRC,” Todwong said.

“Such a move is likely to disorganize the population in the south especially at this time when they referendum preparation[s] are ongoing. Of course not ruling [out] the fact that they [the LRA] could also be used as scapegoats by those opposed to southern independence,” he added.

On August 10, Enough, a campaigning organization, warned of a renewed plot by the rebel outfit to re-enter Uganda next year.

Founded in 2007 to advocate for an end to genocide and crimes against humanity, Enough focuses on the crises in Sudan, eastern Congo, areas affected by the Lord’s Resistance Army and Somalia.

In its report titled: “This is our land now”, Enough claimed that, “The LRA’s activity demonstrates a commitment to maintaining the option of returning to Uganda.”

The report said that since the attempt to destroy the LRA in 2008 – Operation Lightning Thunder – the LRA has been gaining ground in strategic areas which can be used to re-enter northern Uganda.

“The LRA’s behaviour in Bas Uele [district in northeastern DRC], and more widely in Congo, indicates a well-developed strategy focused on maintaining a presence in Congo that enables cross-border activity in CAR, Sudan, and potentially a route back to northern Uganda via Garamba National Park,” the report says.

The report further found that throughout 2009, the LRA has fought to turn Bas Uele into a safe haven.

“Kony seemed aware of the strategic importance of Bas Uele and sent LRA groups to Banda immediately after Operation Lightning Thunder. On December 16, 2008, two days after the Ugandan army bombed LRA bases in Garamba, Kony met with most of his commanders, according to former LRA fighters. He ordered retaliatory attacks to be carried out and assigned his most important commanders to control various areas in Congo and Sudan,” the report said.

Todwong said certain laws within the semi-autonomous region needed to be harmonized in order for southern Sudan to become a part of the East African Community (EAC); a regional body currently comprising of Uganda, Kenya and Tanzania.

“The regional integration involving Southern Sudan is a welcome idea, but certain issues like the customs union and immigration laws, which are still under Sudan as a country will have to be changed to fit the south once its independent,” he observed.

“Once this is achieved, then EAC member countries will review the laws and see if they are in harmony with each other”, he said.

Long-haired, dirty men emerged from the dense bush around his village one day. They spoke a language he did not understand, fighting in a conflict equally as foreign and incomprehensible.

They were members of the notorious Lord’s Resistance Army, or LRA.

They left with more than the year’s harvest. His son is now likely training as a ruthless guerrilla warrior, and his 13-year-old daughter might be forced into commanders’ harems.

Meanwhile, Abuda wastes away in a makeshift camp with others telling similar tales and living on the generosity of nearby villagers who sometimes provide cassava leaves to boil.

“Since I arrived here, life has become miserable to me. As you can see, my body keeps shrinking because there is no proper food,” he said in the town of Nzara in Southern Sudan, where he and the rest of his community have fled.

The LRA, which follows the self-proclaimed spiritual powers of leader Joseph Kony, arose as a rebel movement in the late 1980s among the Acholi people of marginalized northern Uganda. But Kony and his men are no longer in Uganda, and little remains of any group ideology.

Instead, the LRA are known for their seasoned survival skills and brutal tactics of terror, roaming within a weakly-governed nexus where Democratic Republic of Congo, Central African Republic, and Sudan’s autonomous region of Southern Sudan meet.

The guerrillas have been on the run since being scattered from their temporary base in Congolese territory by a botched U.S.-backed December 2008 attack on Kony’s position, dubbed “Operation Lightning Thunder.”

Although forced to adjust to life on the run, little else about its tactics have changed. Known for hacking off the lips or ears of victims, the LRA kills without remorse, leaving behind a scattered trail of missing children, looted villages, and burned huts. 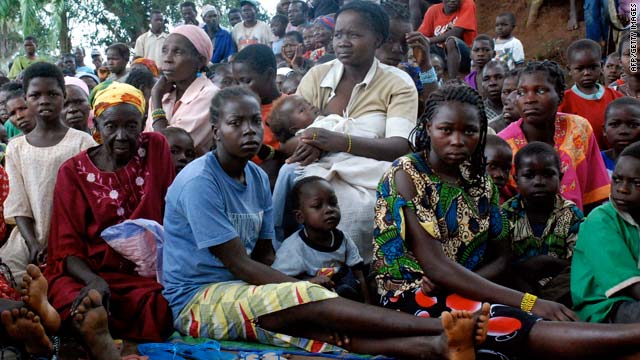 Its bands of bush fighters now appear and disappear across the three troubled nations, traveling in elusive small groups and ravaging local communities for food, clothes, and medicine.

They also seek another sort of booty. No longer able to recruit for an armed movement that long ago lost a coherent goal, Kony’s men must replenish the ranks through alternative means. The New York-based advocacy group Human Rights Watch estimates the group has abducted 700 people — a third children, like Abuda’s — in the last 18 months.

The group’s victims are flooding the region as hapless squatters. Those who cross the area’s porous international borders are fortunate enough to receive some help from the United Nations as refugees, but a loophole in international humanitarian law means that Abuda and the 25,000 other southern Sudanese internally displaced by the LRA this year are left mostly to fend for themselves.

Any end to the conflict appears as distant as ever. Internationally-sponsored peace talks collapsed in 2008, and Kony appears wary of taking his chances with terms of surrender. The International Criminal Court at The Hague has put out an arrest warrant on his head, indicting the Ugandan warlord on 33 charges of war crimes and crimes against humanity.

Amid youthful anti-LRA lobbying in Washington, President Barack Obama signed a law in May giving his administration 180 days to complete a new strategy for ending Kony’s reign of terror and protecting civilians in the LRA’s wake.

Here in Southern Sudan’s fertile Western Equatoria state — where LRA activities have turned the region’s breadbasket into a hungry community relying on outsiders for help — there is confusion among officials as to what the new legislation means.

“The American government gave Obama six months to fight and root those people out of the areas they are operating,” says Robert Bandi, the adviser for political affairs in the Western Equatoria state government. “I think the six months are about to expire. We don’t know how, [but] the Americans should have come in.”

“Up to now the international community has left us alone to fight this war imposed on us,” he said.

Local county commissioner Elia Richard Box says that financial support is what he and other authorities could use most.

“Apart from money, I don’t know what the international community can do,” he said.

If funds are provided, there is no guarantee the aid would find its way here. Financial oversight is poor in Southern Sudan’s nascent government, which came to power in a 2005 peace deal after a 21-year rebellion of its own.

The Southern Sudan army, the SPLA, is still learning how to operate as a professional military and is focused on a number of other internal and external threats as well.

“The LRA is a very weak guerrilla movement,” says Lt. Gen. Kuol Deim Kuol, SPLA’s spokesman. “They operate in small groups of three, and when you try to confront them they don’t stand in front of you.”

“They behave like rats. A rat comes out of a hole, it comes and picks what it wants,” he said. “It is difficult for you to trace it back to the hole.”

Instead, the Southern Sudan government is relying on the assistance of neighboring Uganda’s military, the UPDF, to do most of the chasing of the LRA themselves.

Even if Kony is finally killed or captured, hundreds of former abducted boys have now grown into men. They have learned to operate in mostly autonomous cells far distanced from their leader, and know no life apart from their guerrilla existence.

Abuda, appearing thin and weary, most now live with the knowledge that his son and daughter could soon grow up into Kony’s next generation of followers.