The United Nations controversial Report on the “Genocide” in the Democratic Republic of Congo in 1990s is published after being tempered  down due to the pressure exercised by Rwanda and Uganda on the world body.

This accusation of genocide is mainly against Rwanda’s regime led by President Paul Kagame.  This  eventually would break the    the  status quo  he has developed that his government has  stopped the mass killings of his fellow Tutsis and moderate Hutus in 1994. The cause of the genocide is mainly based on the identity of the Tutsi being as Ethiopians and considered as occupiers. This ideology was inculcated by the divide and rule methodology of the colonial powers. The regime of Kagame adamantly rejects the Ethiopian origin of the Tutsis’ descent. He goes far even by rejecting the existence of any ethnic difrences between the Bawetu,  and Batutsi of  the Great Lakes. The Tutis   and Hutus found  themselves divided  by  post colonial borders in  Rwanda, Burundi, DR Congo, Tanzania, Uganda without fair share of the natural resources is the main cause  of the conflict prepared and designed in the Berlin Conference of African Scramble in 1880’s.

In this new Report both Uganda and Rwanda  stand accused of  committing war crimes against ethnic Hutus in DR Congo during the conflict as a revenge to the 1994 genocide committed against the Tutis due to their Ethiopian origin. Both Ankoli (Uganda) and Tutsi tribes of the Great Lakes regions of Africa traces their origin from Ethiopian descent.

They both countries had threatened to pull out of UN peacekeeping missions in response to the Publication of the Report.

The report divulgates the crimes never previously documented into conflicts in the DR Congo between 1993 and 2003.   It is about 600 incidents and includes allegations of massacres of civilians, torture, and the destruction of infrastructure that leading to Genocide. The anti Ethiopian Tutsi militiamen responsible for that genocide of the Ethiopian Tutsi and the Moderate e Hutus fled into Zaire, where they were pursued by troops loyal to President Kagame and were victim of torture and mass killing leading to Genocide.

UN report mainly accuses them of killings tens of thousands of Hutu. The the only difference between the draft and final reports is that lawyers have gone through it with a fine toothcomb, especially where genocide is mentioned

The final report is manipulated   with cautious language but the basic allegations of against Rwanda and Uganda “Genocide in Congo”   supposedly still maintained.

In the wake of the discovery of three mass graves in the eastern part of the Democratic Republic of the Congo (DRC) in late 2005, the United Nations first announced its intention to send a human rights team to conduct a mapping exercise in DRC in a June 2006 report to the Security Council.

In May 2007, the UN Secretary-General approved the terms of reference of the mapping exercise following a series of consultations among relevant UN agencies and partners and with the Congolese government

The mapping exercise, led by the Office of the UN High Commissioner for Human Rights (OHCHR) had three objectives:

The mapping exercise began in July 2008. Between October 2008 and May 2009, a total of 33 staff worked on the project in the DRC (including Congolese and international human rights experts). Of these, some 20 human rights officers were deployed across the country, operating out of five field offices, to gather documents and information from witnesses to meet the three objectives defined in the terms of reference. The report was submitted to the High Commissioner for Human Rights in June 2009 for review, comments and finalisation.

The mapping team’s 550-page report contains descriptions of 617 alleged violent incidents occurring in the DRC between March 1993 and June 2003. Each of these incidents points to the possible commission of gross violations of human rights and/or international humanitarian law. Each of the incidents listed is backed up by at least two independent sources identified in the report. As serious as they may be, uncorroborated incidents claimed by one single source are not included. Over 1,500 documents relating to human rights violations committed during this period were gathered and analysed with a view to establishing an initial chronology by region of the main violent incidents reported. Only incidents meeting a ‘gravity threshold’ set out in the methodology were considered. Field mapping teams met with over 1,280 witnesses to corroborate or invalidate the violations listed in the chronology. Information was also collected on previously 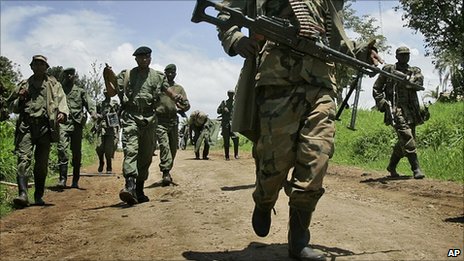 A draft UN report says crimes by the Rwandan army and allied rebels in the Democratic Republic of Congo from 1993 to 2003 could be classified as genocide.

The east of the country is still plagued by army and militia violence despite the end of the country’s five-year war in 2003 in which more than five million people lost their lives – the deadliest conflict since World War II.

What has the fighting been about?

DR Congo is extremely wealthy – and extremely big. Similar in size to Western Europe, it abounds with diamonds, gold, copper, cobalt and zinc.

The country also has supplies of coltan, which is used in mobile phones and other electronic gadgets, and cassiterite, used in food packaging. 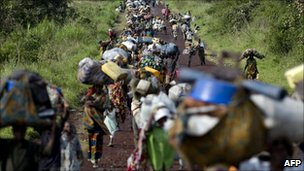 Unfortunately for the people of DR Congo, its resource wealth has rarely been harnessed for their benefit.

This vast country has hardly any roads or railways, while the health and education systems lie in ruins.

Instead, the natural riches have attracted rapacious adventurers, unscrupulous corporations, vicious warlords and corrupt governments and divided the population between competing ethnic groups.

In the early 20th Century Belgian forces arrived and enslaved millions, while King Leopold ruled the country as his personal fiefdom.

During a painful independence struggle in the 1960s, the vast country almost disintegrated as regions fought each other.

But Joseph Mobutu seized power in 1965 and set about crushing internal rebellions and unifying the nation – eventually changing its name to Zaire.

However, Mobutu was soon seduced by wealth and once he controlled most of the country and gained a level of stability and prosperity, he began using the country’s riches for one thing – to ensure he remained in power.

As his rule went on, his plunder continued and the country gradually slipped out of his control.

The 1994 genocide in neighbouring Rwanda hastened his downfall and helped plunge DR Congo into the deadliest conflict in African history.

Why did Rwanda’s genocide affect DR Congo so badly?

After Rwanda’s genocidal Hutu regime was overthrown, more than two million Hutus are thought to have fled into DR Congo fearing reprisals against them by the new, Tutsi-dominated government.

Among them were many of the militiamen responsible for the genocide.

They quickly allied themselves with Mobutu’s government and began to attack DR Congo’s sizeable population of ethnic Tutsis, who had lived in the country for generations.

The Tutsi militias, allied to other local groups backed by Uganda, eventually marched on Kinshasa and overthrew Mobutu’s government.

They installed Laurent Kabila as president and he renamed the country – from Zaire to DR Congo.

But Kabila failed to expel the Hutu militia and tiny Rwanda, which had put him in power, soon sent a new force to oust him.

Kabila then called in help from Zimbabwe, Namibia and Angola and for the next five years all six countries, and others, fought a proxy war on Congolese land.

All sides were accused of using the cover of the war to loot the country’s riches.

More than five million people died in the war and its aftermath – mostly from starvation or disease.

Although the war was declared over in 2003, the east of the country continues to be unstable

Has DR Congo achieved any kind of peace?

Most of the country has now found peace and the central government has slowly reasserted control.

The country even started to live up to its name by having the first democratic elections in more than four decades, which saw the late Laurent Kabila’s son, Joseph, elected as president.

But a proxy war between Rwanda and the Kinshasa government continued in the east until the end of 2008.

Notorious Tutsi warlord Gen Laurent Nkunda – who most analysts believe was backed by Rwanda – waged a campaign to destroy Hutu rebels from the Democratic Forces for the Liberation of Rwanda (FDLR).

He accused the government of backing the FDLR.

A sea-change in the conflict came about in late 2008 when Rwanda and DR Congo joined forces to combat the FDLR in the provinces of North and South Kivu.

As part of the deal, Gen Nkunda was taken out of the country and put under house arrest in Rwanda – where he remains.

But the bitter conflict has continued unabated and Congolese government troops, backed by thousands of UN peacekeepers, have failed to defeat the FDLR rebels.

Reports of mass rapes, killings and other atrocities committed by rebels and government troops continue.

What is the UN doing?

The UN’s peacekeeping mission has been in DR Congo for 10 years.

At one point it was the biggest peacekeeping operation in the world, with almost 20,000 personnel on the ground.

It is mandated to protect civilians and also help in the reconstruction of the country.

But as the battles in the east have rumbled on, the allegiances and intentions of the major players have become increasingly murky.

Warlords have been absorbed into the army but are widely accused of carrying out atrocities and running their own personal militias.

Army commanders have been accused of supplying the FDLR – the very rebels they are supposed to be fighting.

Human rights groups say the army and the FDLR are working together to exploit mines.

And Human Rights Watch has suggested the UN is risking becoming complicit in atrocities against civilians.

In November 2009, a report by UN-commissioned experts said UN involvement had done nothing to quell the violence – with rebels continuing to kill and plunder natural resources with impunity and claims the rebels are supported by an international crime network stretching through Africa to Western Europe and North America.

In August 2010, the UN force came in for more criticism for not doing anything to stop the rape of more than 150 women and children within miles of their base near Luvungi, saying they only heard about the attacks 10 days afterwards.

Meanwhile, the Congolese government has said it wants the UN force to leave by the end of 2011 – when elections are due.