Ethiopia on the 20th anniversary of Irredentism, War & Famine is ready to balkanize in model of Somalia and Yugoslavia, Muse Tegegne, Prof. 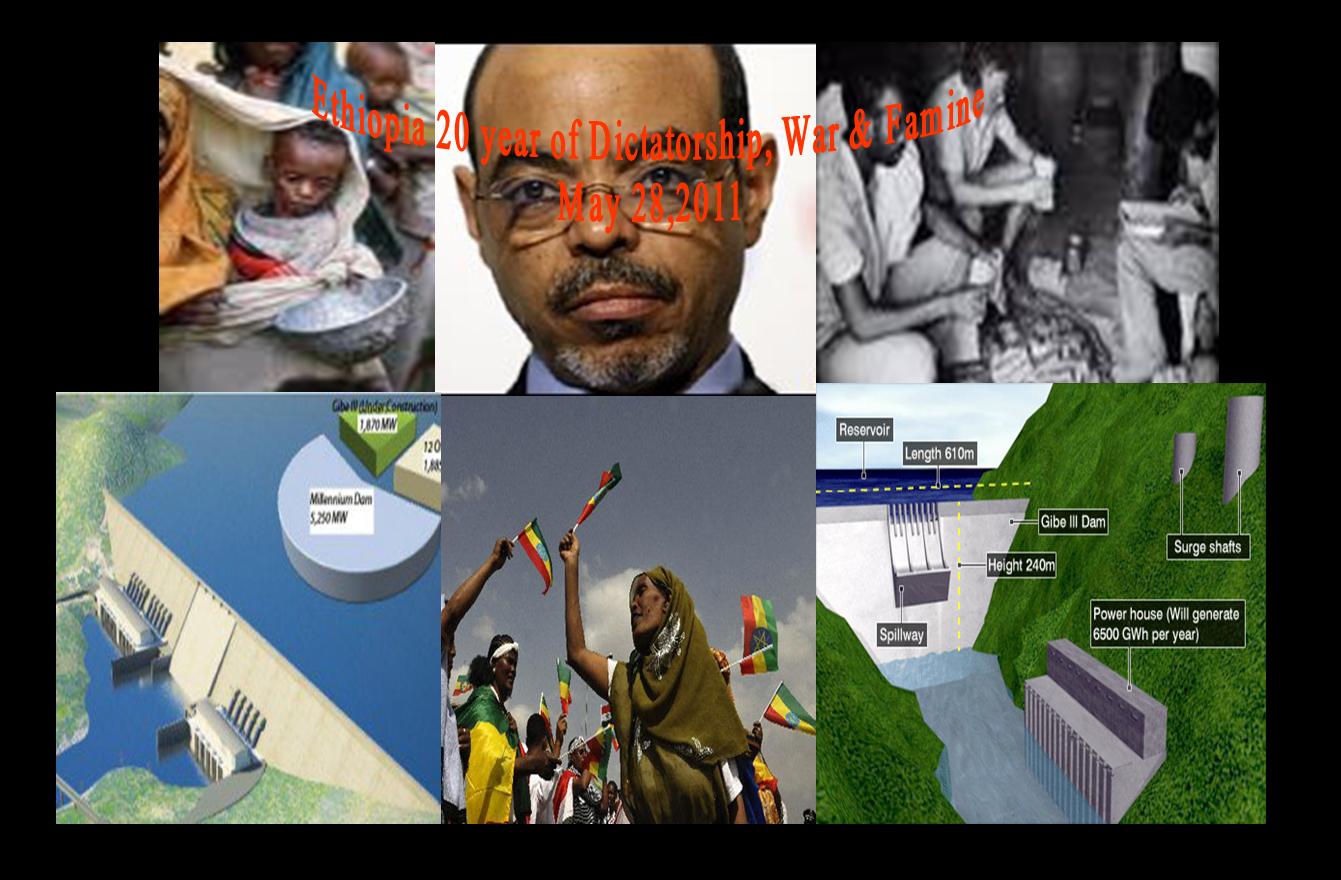 Ethiopia inaugurates the 20th year of Ethnical irredentism balkanizing  of the unitary  state as existed for over 3000 years. This dictatorial regime of Melese Zenawie came to power at the demise of the satellite regime of Mengistu Haile Marian two years after  the fall the iron curtain in  19191. Melse acessed  power by  manipulating  famine aide  to buy arms at the expense of millions starving in the region of Tigre and the rest of Ethiopia.

The recent “day of rage” counter demonstration planned by democracy activists failed to materialize  in the model of  Arabic Awakenings is  due to two principal reasons –  first of the absence of a grass root movements to embrace their call since the diasporas has been  busy collecting money  criticizing one another in pal talks    rather than organizing  mass under trodden inside Ethiopia , thus end up being a media tiger  –  and  second of the Ethiopian youth is at embryonic stage of social networking highly controlled by the state. If any, they are all those the benefiter of the regime who manipulated the internet not the mass youth like that of Egypt and Tunisia.

Thousands of Ethiopians were forced to turn out in Addis Ababa’s main square to mark Prime Minister Melees Zenawi’s 20th anniversary in power at the risk of losing their job
though at the gunpoint the turnout at Addis Ababa’s Meskel Square was a fraction of the one million predicted by the dictator. The dictator order to cut down the event to its minimum gave further instruction for the office workers to go back to work. In many part of country the regime deliberated its 2th anniversary the day before to circumvent the mass uprising.

The dictator Melese Zenawi’s address bit the record of minimum speech of 5 minutes to commemorate his coming to power 20 years ago, he used to make a long brain storming at the model of  totalitarian regimes. Rather he tried even to drawn it in the Nile by calling for support of construction of a massive dam. This I unprecedented challenge  for  downstream  riparian  by constructing a megalomaniac  death dam which eventually will drain and dry the  flow of the Nile river  by stopping the annual flooding., while Ethiopia endowed with plenty of thermal energy accessible with a less cost to human and environment consequences in a country   over 3 million starveling.

The last two decades of Melse’s regime took the starving Ethiopians for three major wars_ two Eritrea and one with Somalia. He dumped the election of 2005 which he lost in a day light. In 2010 he rugged the election by assuring his 3 decades of power in a dictatorial regime he created.

Today the regime is confronting a war in Somali region, in Kenyan border, and in the West of the country a conflict not yet accessible to the international media.

When it comes to liberation movements they have not yet found their Ethiopianist identity struggling inside the country. Many seems to follow the rhythm imposed by the belligerent regime of Eritrea or others or those movements fighting to create an independent Ethnic region in the model of Southern Sudan or Somaliland.

If the country could not find an avantgardist  alternative  to bring it to a democracy and consolidate the national state hood it will catch the syndrome of Somali and that of Yugoslavia leading to eventual  of balkanization based on the Ethnical constitution and its article 39  which permits  self determination up to independence. This the only constitution  having such article in the world.

Article 39 the Right of Nations, Nationalities and Peoples

1. Every nation, nationality or people in Ethiopia shall have the unrestricted right to self determination up to secession.

The 20th Anniversary of Ginbot 20 celebration in Addis Ababa, Ethiopia

Ethiopian Government Press Release on the 20th Anniversary of Ginbot 20