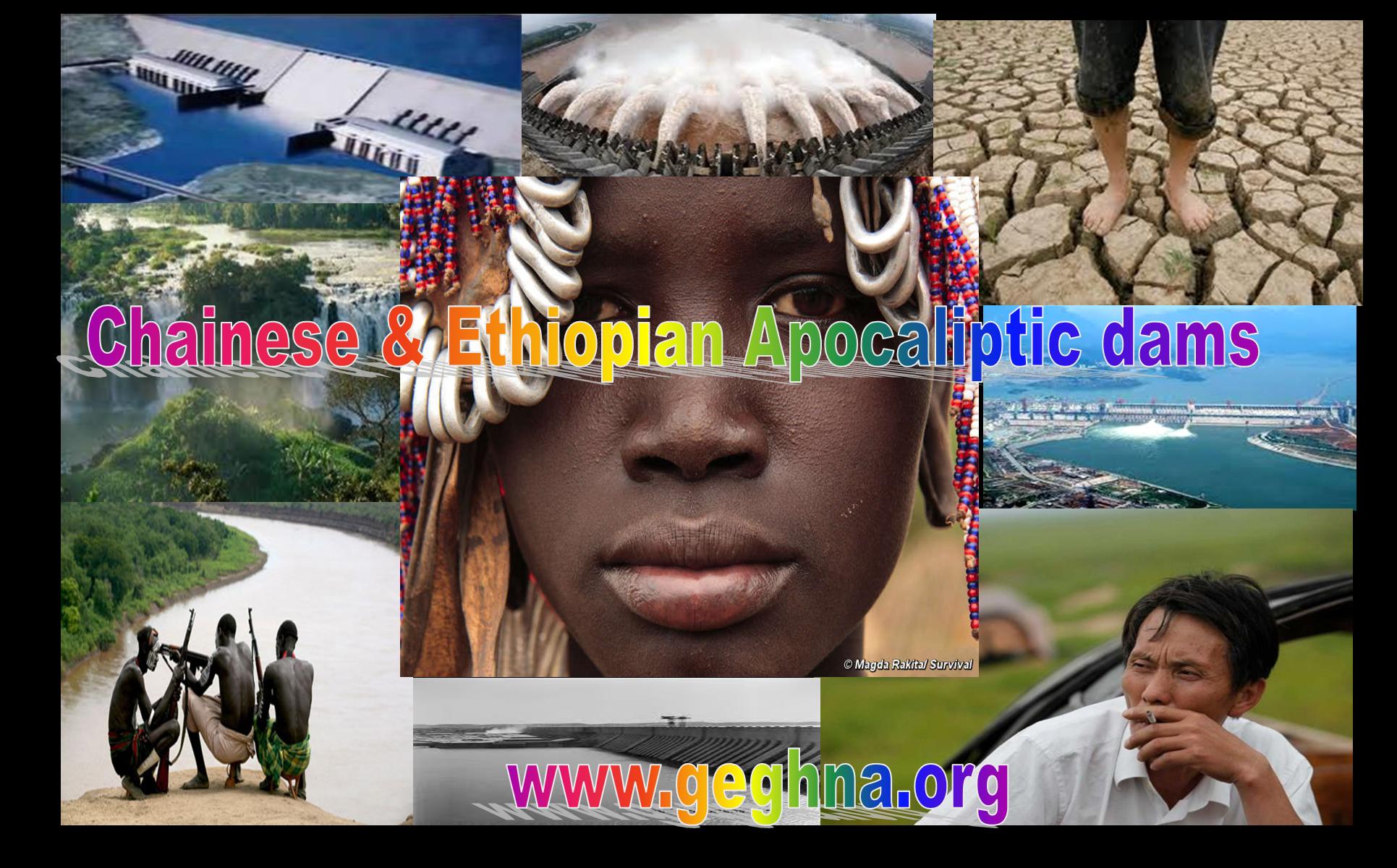 The direct effect the Chinese tree Gorge Dams is  drought, land sliding, and drying of  lakes. This will be the best warning for the Ethiopian Dam rug Melse Zenawie from stopping to dam the Nile  and the Omo rivers with consequences of drying Lake Tana and Turkana. Nile its source is the Lake Tana the only life giving lake  to Egypt, while Omo is the life line for Lake Turkana in Kenya.

Poyang Lake just months ago but now is a dry ocean of green grass because of China’s worst drought in decades the main culprit is the three Gorge dams, soon the same will be for Lake Tana in Ethiopia and Turkana in Kenya due the Death Dams of the Nile and Omo rivers constructed with the help the China.

As that of  Poyang shrinks to a tenth its usual size, crops wither and millions of people go thirsty, critics point to the gargantuan Three Gorges Dam as one cause, making it a symbol of the risks of the country’s dream of Mega dams not only in China but  also in the drought stricken Horn of Africa.

Many villagers environmental   scientists suspect the dam not only withholds water from the Yangtze River downstream, but could also be altering weather patterns, contributing to the lowest rainfall some areas have seen in a half-century or more.  The same type of  drought due to the Gibe I,II,III dams  has rekindle a tribal war in Lake Turkana region of Ethiopia and Kenya.

The Chinese government  in the opposite to its Ethiopian counterpart , though in the beginning denies that Three Gorges can cause droughts but has acknowledged some of its environmental problems in a debate that highlights China’s reliance on such showcase projects to sustain its economic boom.

The Three Gorges Dam,  like the Ethiopian coming  Nile Millennium & gibe III Dams, is the world’s biggest hydroelectric plant is  a way to control flooding along the Yangtze and generate massive power for the country’s ravenous industries. The government already has used up 80 percent of the reserves in the 410-mile-long (660-kilometer-long) reservoir by releasing extra water to relieve drought conditions downstream. When it comes  to the future Ethiopian Nile & Omo Dam planed in the image of the Three Gorges Dam will dry up the two rivers  irreversibly.

The Yangtze’s levels have fallen enough to threaten shipping both upstream and downstream as far as Shanghai, where high salt tides threaten drinking water supplies for its 23 million residents. Once the Ethiopian Millennium Dam is over the Sudanese  and Egyptian must prepare to use another means of transport since the Nile will cease to Exist if any Egypt is left without the Nile.

The dam rather than producing great energy as dreamed by the Chinese engineers the  waning hydroelectric capacity are expected to deepen in the hottest days of summer. If it continues at the present rhythm many farmers have to  abandon their dried ponds and fields, prices for food are surging, defying Beijing’s efforts to bring down already stubbornly high inflation. Today China Luks  water to sustain its 1.3 billion people. The Three gorge dams  seems  accelerating the  end of  China’s high growth since the government has exhausted  its natural  environmental reserve to fall back .

The Chinese State Council admitted that  the $23 billion Three Gorges project has caused a slew of environmental, geologic and economic problems. Urgent action is needed to reduce risks of natural disasters such as landslides and alleviate poverty among the 1.4 million people forced to relocate, while their new won satellite state of Ethiopia led by Melse Zenawie  refused to recognize the resent drought in Turkana region is caused by the Gibe dams of Omo river.

More and more Chinese farmers and fisherman’s in the lake Poyang  and around the country that the dam  causes drought. China’s leaders like their Ethiopian counterpart are very sensitive when one criticizes their Megalomaniac Death Dams. People’s Daily like most of the Ethiopians state run Journals recently declared that – “No evidence supports the theory that the Three Gorges causes droughts.”

Dam can altering the humidity of an area  and affect local rainfall . According  to Kenneth Pomeranz,  the University of California’s  specialist on the Chinese Water’s conclusion on the  Apocalyptic three  Gorge  Dams  as a  “big Rube Goldberg contraption.”

“All the pieces have to work or you’ve got big problems. Obviously one of those pieces is that you have to have guessed right about the water supply in the Yangtze basin. If it doesn’t have as much water as was thought, you have to give it up.

Like 6650 km long Nile, to Sudan and Egypt, Yangtze the 6,300 km waterway provides  about a fifth of China’s economic activity and two-thirds of its inland shipping. Since Three Apocalyptic Three Gorge Dams  completion, the region around Poyang Lake has dried out. With the completion of the Ethiopian Millennium Death Dams not only Ethiopia but Egypt and Sudan will revive the Biblical Famine due to the coming unfrequented droughts.

According to Jacques Leslie building dams around the Equator will disequilibrate the earth’s magnetic tilt in his recent conferences. The Ethiopian Dictator must be stopped before he does un reparable damage to the planets magnetic equilibrium.
———–

4:35Water Troubles Along the Nile