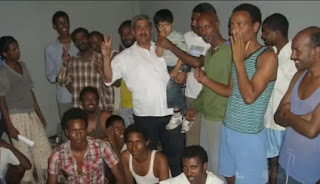 neral Teleke Mengus sells Eritrean refugees to Arabs as medical spare parts. (Watch Videos)The head of the Eritrean Boarder Surveillance department B. General Tekel Menejus with his colonels control the human trafficking and body part commercialization of Eritrean refugees. In the past the Eritrean soldiers were ordered to shoot escaping Eritrean to the neighboring countries with live rounds, but now they cash them and sell them to Bedouins.

The Main head for such enterprise is Col. Fessum who supposedly heads the Ethiopian opposition movements in in the western areas is the key ally of the Bedouins for such highly lucrative body part market in the Arab world. Every week of thousands of Eritreans are sold to the Bedouin tribes known as Rashid’s dispersed in Eritrea, Sudan, Egypt and Arabian Peninsula. They are known  as nomadic businessman. They sell anything starting from petrol, foodstuff, electronic, car spare parts and arms. This is the  most lucrative  Human trafficking chain in the horn of Africa. The Col. used to travel to Dubai and other bushiness centers to touch his share of the human parts trafficking in Eritrea with different passports having different names.