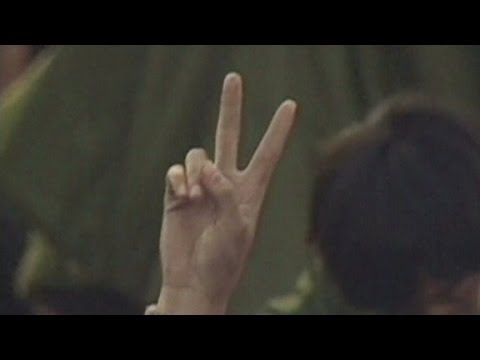 The  Fourth of June when the army that was founded for the people turned on the unarmed citizens of Peking to destroy a peaceful student-led democracy movement. We remember also in Tibet in 1950’s the unarmed monks were shot  in cold blood  in  Lhasa, and since the country occupied and depopulated  to this day.

The massacre in the  Tiananmen Square started soon after midnight. It was a different army from the unarmed one which had tried to enter the square on Friday night and failed. This one was told to kill, and the soldiers with their AK- 47 automatic rifles and the armored personnel carriers with their machine guns opened fire indiscriminately, in the air, directly at the huge crowds, at small groups, everywhere as we can see in these attached videos.

Lined up in rows across the Avenue of Eternal Peace, they advanced slowly, shooting all the while, then they would halt and kneel and fire directly into the crowd as you can see in the above videos.  They did the same at the southern end of the square by Zhengyang Gate. When both ends of the square were cleared, they switched off the lights and encircled the thousands of students who had crowded together on the Revolutionary Heroes’ monument. Dawn broke and riot police moved in with truncheons. Everyone expected the army. But no one expected such ferocity, such armor, such numbers. There were more than 100,000 soldiers. ( watch Video)

Backlash: the army responded with violence to peaceful protests (Corbis)
Many foreign reporters started  crying “If this is the People’s Army, God spare China.” They behaved like the Red Guards, with a systematic and frenzied brutality. They were the very institution that was once called out to protect China from the Red Guard excesses. Now they are killing civilians.

June 4th , 1989  all the while the lorries kept rumbling forward, stopping from time to time until the citizens of Peking were pushed back from the northern end of the square by the entrance to the Forbidden City.

A celebrated image of a man trying to stop the tanks entering the square know today as Tank  Man
At one stage some students came from side streets, shouting “go home, go home” to stalled lorries outside the leadership compound. They were scattered by militia men with clubs like axe-handles, which cracked a few skulls. It was probably the one occasion during the night when they did not use guns.

Along the tree-lined streets beside the Forbidden City, groups of people were talking softly, scared but curious.. About half an hour later some of the armour returned again from the square, and in a continuing moving circle, they opened fire all around. It was a battlefield. It was a lesson in brute powerThe world  was weeping for the people of Peking. One  cannot see how they are ever likely to trust their leaders again.

The rape of Peking

By Michael Fathers and Andrew Higgins

It was the worst single act of violence against the Chinese people since the Communist Party took power in Peking 40 years ago. Hundreds were dead, many more were wounded and still the People’s Liberation Army continued throughout yesterday and into the early hours of this morning to fire on the capital’s citizens.

Tanks and armoured personnel carriers (APCs) which had blasted their way into Tiananmen Square spread out across the centre of the city, opening fire from time to time with machine guns at groups of people who were on the streets. From 3am onwards, nearly 90 fresh tanks roared in from the city’s eastern suburbs along the main boulevard past Tiananmen Square to reinforce those already in Peking.

The capital had become a city under siege. Fires could be seen burning in the south of Peking early this morning. The chatter of gunfire and the thunder of an electric storm shook the night. The people of Peking, outraged by the bloodletting, continued to challenge the military despite the massive forces arrayed against them. Students, whose seven-week campaign for political change triggered the onslaught, yesterday displayed the grisly evidence of the killing. They paraded corpses of fallen comrades at their universities.

Hong Kong and the Reaction of Madame Thatcher

In Hong Kong more than 200,000 nervous residents appeared at a rally to mourn the dead in Peking and called for a general strike on Wednesday. “What happened in Peking has broken confidence in Hong Kong’s future,” said Elsie Elliott Tu, a member of the Legislative Council. Margaret Thatcher, in a statement from Downing Street, said she had been “appalled by the indiscriminate shooting of unarmed people”. Although she could “understand the deep anxiety” felt in Hong Kong, which reverts to China in 1997, Britain would “continue to stand by its commitment to a secure future” for the colony and was “confident” China would do the same.

Students in Shanghai erected barricades and bus drivers went on strike. Roads leading to Fudan University and Tongji University and those to the waterfront by the Peace Hotel were blocked. The streets of central Peking were covered with bloodstains, rubble and the wreckage of Saturday night’s pitched battle. At the far western end of the Avenue of Eternal Peace, a long line of APCs were gutted and smoking. Several miles in the other direction, the burned body of a soldier was strung up and dangled from an overpass. Headless corpses, crushed by tanks and APCs, were lying on other roads.

State radio, quoting the army newspaper, Liberation Army Daily, said the armed forces had achieved a great victory and crushed counter-revolutionary violence. The official media gave detailed accounts of military casualties, saying 1,000 soldiers had been hurt. It acknowledged only that there had been some civilian casualties. Reports in Peking said the civilian death toll could be as many as 1,400. Across the city, hospitals were overflowing with bodies lying in blood-smeared corridors. Doctors said they were unable to cope with the carnage and many injured were likely to die for lack of attention. In one hospital, a power cut forced surgeons to operate by torchlight to remove bullets.

The state radio unconsciously mimicked the infamous American adage in Vietnam that to save the village you had to destroy it. In explaining the military assault on Peking, the radio said: “It was necessary to undertake that action to save lives and property.”

The troops control Tiananmen Square, the site of the student protest and now the focus of a massive military build-up. More than 100 tanks, dozens of APCs and tens of thousands of troops occupied the square and its surroundings. Throughout the day a helicopter acted as a spotter for the army, taking off and landing in the square repeatedly, and apparently tipping off troops at any sign of a large gathering of civilians.

The square was the army’s, but the battle for the streets had yet to be won. The fight for the hearts and minds of Peking’s citizens seems already lost. Students and an independent and illegal workers’ union have called for a general strike today to express public outrage. However, work already seems to have stopped. Public transport is not operating, many people, frightened and appalled by the violence, have kept away from work.

Activists duck for cover during the Chinese crackdown (Corbis)
New violence seems likely after the capture of an APC by the students and reports that they are building an arsenal of their own from captured weapons. Several university campuses have been surrounded by troops and armoured vehicles. Student leaders urged their colleages to stay indoors, but they seemed to be losing control as anger over the military onslaught on their peaceful movement replaced the carnival mood of previous weeks.

Ordinary citizens taunted the troops with chants of “fascists”, “murderers go home”. Slogans attacking Li Peng, the Prime Minister, had been daubed in blood on buses and walls. “Li Peng, you will never be at peace,” read one message in fresh blood on the side of a booth. Others condemned 84-year-old Deng Xiaoping, China’s paramount leader. According to one report Mr Deng, although in serious condition in hospital, had given the order for the troop advance into the capital, saying that the youth movement had to be suppressed “even if they are protesting out of ignorance”. Acknowledging that many ordinary people had joined the student cause, he is alleged to have said: “In China even one million people is still only a small number.”

The savagery of the army’s action came against a background of political turmoil brought about by the impending succession. How ill Mr Deng is remains unclear, but factions within the party and the military have already begun to stake their claim to lead China when Mr Deng does finally leave the scene. How to handle the students’ Democracy Movement became the focus of the battle for future supremacy. Mr Deng’s once-ordained successor, Zhao Ziyang, the party General Secretary, called for moderation towards the students and has been stripped of his authority, though not yet his title.

Opposing him and, for the moment victorious, is Li Peng. The final outcome is far from certain and he is now not only reviled by Chinese people as a butcher, but totally dependent on the fickle loyalties of the military.