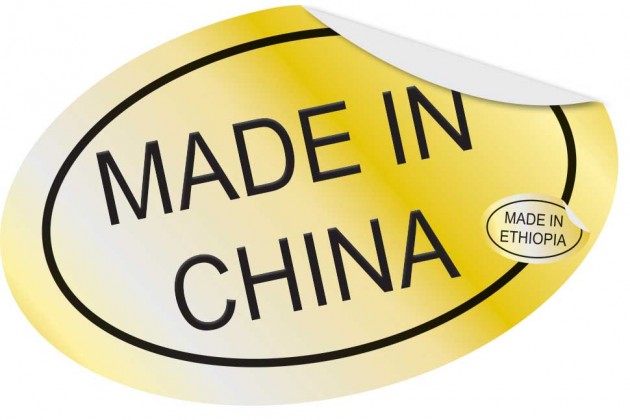 China of Mao conquered militarily  Tibet  in 1959, today Ethiopia became the new colony without firing a a shot. With the Chinese speaking symbolic president of Ethiopia  at the top. Ethiopians are slaved  regimented almost for free paid under dollar  a day. Please read the following article entitled “Turning Ethiopia Into China’s China.”

by Kevin Hamlin, Ilya Gridneff, and William Davison  for Bloomberg

Illustration by 731
Ethiopian workers walking through the parking lot of Huajian Shoes’ factory outside Addis Ababa in June chose the wrong day to leave their shirts untucked. The company’s president, just arrived from China, spotted them through the window, sprang up, and ran outside. Zhang Huarong, a former People’s Liberation Army soldier, harangued them in Chinese, tugging at one man’s polo shirt and forcing another worker’s into his pants. Amazed, the workers stood silent until the eruption subsided.
Zhang’s factory is part of the next wave of China’s investment in Africa. It started with infrastructure, especially the kind that helped the Chinese extract African oil, copper, and other raw materials to fuel China’s industrial complex. Now China is getting too expensive to do the low-tech work it’s known for. African nations such as Ethiopia, Kenya, Lesotho, Rwanda, Senegal, and Tanzania want their share of the 80 million manufacturing jobs that China is expected to export, according to Justin Lin Yifu, a former World Bank chief economist who teaches economics at Peking University. Weaker consumer spending in the U.S. and Europe has prompted global retailers to speed up their search for lower-cost producers.
STORY: Why China’s Manufacturing Sector Has Hit a Wall
Shaping up employees is one part of Zhang’s quest to squeeze more profit out of Huajian’s factory, where wages of about $40 a month are less than 10 percent of what comparable Chinese workers may make. Just as companies discovered with China when they began manufacturing there in the 1980s, Ethiopia’s workforce is untrained, its power supply is intermittent, and its roads are so bad that trips can take six times as long as they should. “Ethiopia is exactly like China 30 years ago,” says Zhang, 55, who quit the military in 1982 to make shoes from his home in Jiangxi province with three sewing machines. He now supplies such well-known brands as Nine West and Guess (GES).
Almost three years after Zhang began his Ethiopian adventure at the invitation of the late Prime Minister Meles Zenawi, he says he’s unhappy with profits at the plant, frustrated by “widespread inefficiency” in the local bureaucracy, and struggling to raise productivity from a level that he says is about a third of China’s. Transportation and logistics that cost as much as four times what they do in China are prompting Huajian to set up its own trucking company, according to Zhang. That will free Huajian from using the inefficient local haulers, but it can’t fix the roads. It takes two hours to drive 30 kilometers (18 miles) to the Huajian factory from the capital along the main artery. Oil tankers and trucks stream along the bumpy, potholed, and at times unpaved road. Goats, donkeys, and cows wander along, occasionally straying into bumper-to-bumper traffic. Minibuses and dented taxis, mostly blue Ladas from Ethiopia’s past as a Soviet ally, weave through oncoming traffic, coughing exhaust.
STORY: Will Manufacturing Reverse China’s Economic Slump?

Photograph by William Davidson/Bloomberg
In a country where 80 percent of the labor force is in agriculture, manufacturers don’t have to worry about finding new workers. The population of about 96 million is Africa’s second-largest after Nigeria’s. Cheap labor and electricity and a government striving to draw foreign investment make Ethiopia more attractive than many other African nations, says Deborah Brautigam, author of The Dragon’s Gift: The Real Story of China in Africa and a professor of international development and comparative politics at Johns Hopkins University. “They are trying to establish conditions for a transformation,” Brautigam says. “It could become the China of Africa.” Foreign direct investment in Ethiopia jumped 3.4 times to $953 million last year from the year before, according to estimates by the United Nations Conference on Trade and Development.
Huajian’s 3,500 Ethiopian workers produced 2 million pairs of shoes last year. Located in one of the country’s first industrial zones—which offer better infrastructure and tax exemptions—the factory began operating in January 2012. It became profitable its first year and now makes $100,000 to $200,000 a month, Zhang says—an insufficient return that he claims will rise as workers become better trained. Beneath bright fluorescent lights and amid the drone of machines, workers cut, glue, stitch, and sew Marc Fisher leather boots destined for the U.S. market. Supervisors monitor quotas on whiteboards, giving small cash rewards to winning teams and criticizing those who fall short.Zhang spends about half his time in Ethiopia, he says. During his June visit to the Huajian plant he spoke to about 200 uniformed supervisors, a mixture of Ethiopians and Chinese, assembled in the parking lot. He berated supervisors for their inefficiency, then praised them for their loyalty, his words translated into Amharic, Ethiopia’s national language, and Oromo, the local language. He ordered staff to march on the spot as they all chanted together in Chinese. Then they recited slogans: “Unite as one.” “Improvement together.” “Civilized and efficient.” They sang the Song of Huajian, which urged “we Huajian people” to move forward, hold the banner of Huajian high, and “keep our business forever.” Chinese supervisors led the song, while their Ethiopian colleagues stumbled over some words.

Later, Zhang explained why he can’t be as tough as he’d like. “Here the management cannot be too strong as there will be a problem with the culture,” he said through a translator. “On one hand we have to have strict requirements, on the other hand we have to take care of them. They may be poor, but we have to respect their dignity.”
Five workers interviewed at the factory describe strict standards, with rewards for good work and pay docked for ruined shoes. Taddelech Teshome, 24, says her day starts at 7:20 a.m. after her Chinese employers provide workers with a breakfast of bread and tea. When her morning shift ferrying shoes from the factory floor to the warehouse is over, she gets fed the national staple sour bread for lunch, then resumes work until 5:15. After that a Huajian bus takes her to nearby Debre Zeit, where she rents a room with her sister for $18 a month. Taddelech came to work at Huajian just over a year ago from her home 165 kilometers away in the Arsi region after her sister started work at the factory. “The work is good because I pay my rent and I can look after myself,” she says. “It’s transformed my life.”
STORY: In Manufacturing, the U.S. Is Surprisingly Competitive
Huajian’s Zhang wants to increase its workforce in Ethiopia to as many as 50,000 within eight years. A model of a planned new plant at the edge of Addis Ababa is displayed at the factory. It shows a 341-acre complex, partly financed by more than $300 million from Huajian, that will include apartments for workers, a wooded area, and a technical university.
In the parking lot, after supervisors had sung the company song, Zhang dismissed the Ethiopians but continued to rail against the Chinese managers. To make his points he thrust a broomstick toward them repeatedly. He finally left the stage, laughing and raising his fist in triumph.