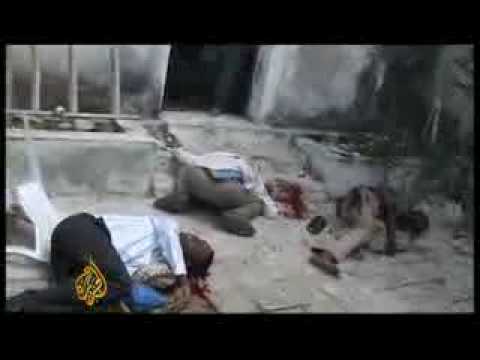 Somalia the Kurdistan of Africa was known as Puntland prehistorically by the ancient Egypt.  Since the Scramble of Africa the Somalis have gone through war and unprecedented conflict.   The Somalis are found today in Kenya, Ethiopia, Djibouti, Puntland, Somaliland and Somalia.

In the post colonial period the Somalis have been victim of extremism and continue foreign intervention: – the US in 94/95, Ethiopia 2006, and recently they become the center of conflict piracy and instability in the horn of Africa. Most importantly they have been the battle ground for Eritrean and Ethiopian Proxy wars which engulfed the countries of the Great Lakes Uganda and Burundi under sponsored by AU.   A transitional Government has been established under the auspices of the AU and the UN.

The recent rift between the two top leader of the embattled Somalia is about to collapse mostly from the weakness and the    ambivalent   engagement of the AU troops.

The Transitional government of Somali is highly weakened by three principal factures namely:-

Firstly  the  clan politics installed in the colonial past   inside  Somalia,  and  the recent TGS which by the rift between the two rivals in power- Sharif Ahmed, President and   the Premier Sharmarke;

Secondly by a Strong Al Shabab & the Militias advancement supported by the countries of the Red Se cost;

Thirdly by non commitment of the AU member countries to give unconditional support to TGS, and those engaged are half heartedly employed as means to boom the position of the supporting countries strong men’s international stand rather than resolving the Somalian Question Definitively.

All these factors are working indirectly for Al Shabab’s advancement.  The continuous polemic between the two will collapse the AU supported TGS if not resolved internally. TGS could not be able   to control outside the   President’s office residence and the Air port which was targeted by the suicide bombers of Al Shabab few days earlier. The Resent Al Shabab’s   bomb blast at Muna Hotel killed some member of TGS parliament sending shock waves to the AMSOM troops lamenting in Mogadishu. The recent Al-Shabab attack   forced the Ugandan president to send additional troops to help the government in its last battle against Al-Shabab.

The 6000 strong AU peace keeping force did not succeed to subdue the supposedly Al Qaida supported Somalian street fighters. They are indirectly supported by the government of the Red Sea costs who opposes the Ethiopian and AU supported TGS forces on the ground.   Red Sea governments like Yemen, Eritrea and Egypt opposes the definitive secession Somaliland. The newly elected Islamic Unity party is highly advised to take over Mogadishu by these governments which see their interest compromised.  The newly independent Somaliland on the Cost of the Red sea serving as an Ethiopian out let than that of the Traditional Djibouti and Eritrea will weaken their economic and geostrategic interest in long term if the port of Barbara becomes the principal port in the Indian Ocean for the Ethiopian and the newly independent Southern Sudan outlet.

The continues division between the two top leaders  will precipitate the  end of the TGS as we know it,  and will be bring a new change breaking the status quo. The TGS Premier seemingly has assured the support of the Parliament and some countries around the region against President Sharif.

The United Nations has warned that Somalia insurgents are posing a serious international security threat and made a renewed appeal to the transitional government to end the civil conflict.

The rise of the al-Shabaab movement has raised concerns among western governments, in addition to the pirates operating out of Somalia ports.

Somalia will be in the spotlight during a debate at the Security Council on Thursday and a top level ministerial meeting on the conflict at the UN General Assembly summit next week.

Some 76 people were killed in that attack.

“The attacks demonstrated that al-Shabaab remains a serious security threat for Somalia, the sub-region and the wider international community,” Ban said in a report to the Security Council on Monday.

The UN report said the Somali capital’s “already weak health services are struggling to cope with casualties”, citing thousands of reported deaths in Mogadishu this year.

A special envoy for Ban, Augustine Mahiga, an African Union envoy, Boubacar Diarra, and an East African peace envoy, Kipruto Arap Kirwa, were at Mogadishu airport on Thursday to meet Sharif Sheikh Ahmed, the head of the transitional government, when a suicide bomber killed five people there.

The three envoys said on Monday the government is in disarray and warned that the divisions were “potentially very damaging” to efforts to end the chaos.

The transitional government is scheduled to end in August 2011, and analysts say it has achieved little so far.

Repeated political battles in recent months have seen the president dissolve the cabinet and the parliament speaker resign.

“Somali forces and [AMISOM troops] risk their lives each day to protect the transitional federation institutions and defend the integrity of the peace process,” the three envoys said in a statement released in Nairobi.

“The leaders and politicians need to demonstrate their unity of purpose to show they are working together to restore peace to Somalia.”

Ban sent a similar message highlighting international efforts to promote peace in spite of the “internal disputes” and “political complications”.

“I remind all parties to the conflict that those found responsible for war crimes will face justice,” Ban said.

“In that regard I support the proposal to document the most serious violations committed, as an essential step in the fight against impunity.”