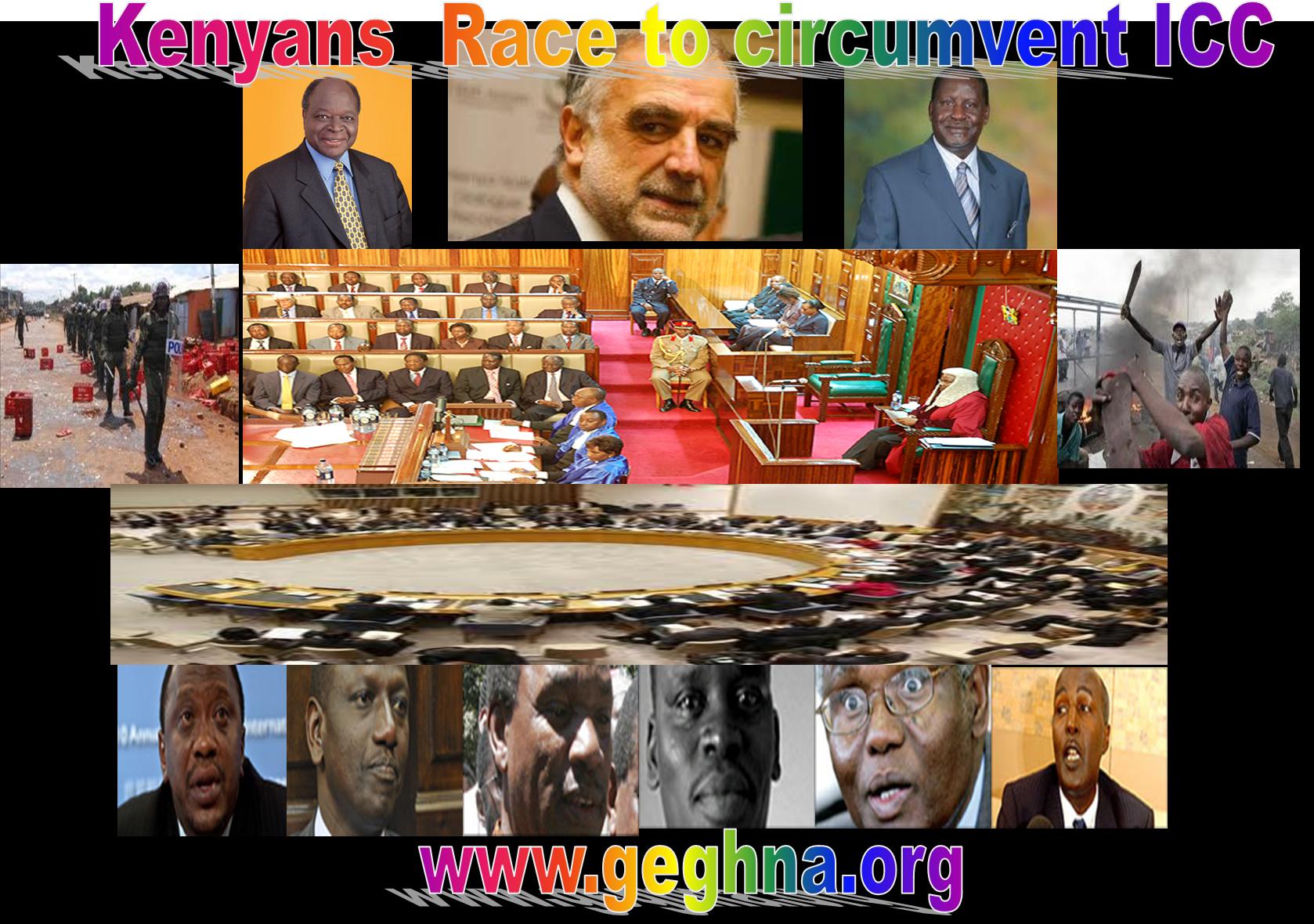 Since 2007 contested election Kenya has become a center of intolerance, and the country’s capital city became a city of Human right abuse. The refuges from the neighboring countries especially that of Ethiopia and Somalia are victims of Kenyan corrupted Judiciary.  The Kenyan authorities are famous in killing out rightly their own voters in cold blood. You cannot walk on the streets of Kenya without been harassed and robbed in plane   day light by the corrupted security men as a foreigner. The worst of the Kenyan abuse reached the ears and eyes of the ICC, that of mass massacre of the innocent voters. These are the  six individual he wants to open cases against them  over the 2007 post-election violence.

Kenya the member of ICC is trying to get out of the organization in order to save the 6 convicted officials from appearing in the International court of justice. It is always easy to be a member and judge others. But it comes home it has become hard to apply. This has been proved by the recent parliamentary motion to change the constitution of the country which just been rectify by popular referendum.  The Kenyan MPs seem they can manipulate the law of the land to fit their needs not of the country. They even went further preparing to establish a local tribunal one like Rwanda to save the convicted officials so it would not trace up unto the president and prime minster himself.

In this shameful parliamentary debate Mr. Odinaga gave the following options as a way out from the crisis:-

President Kibaki and Prime Minister Raila Odinga discussed the establishment Rwanda type local tribunal as an alternative to trial at the Hague to save the six Kenyans under investigation by International Criminal Court.

And the first step towards circumventing the international community is to prove like Rwanda that “Kenya has the will and capacity to try the suspects locally is by undertaking comprehensive judicial reform.”

The President and the Prime Minister spent a considerable amount of time to exploring ways of appointing a new Chief Justice working around the provisions of the new Constitution which recognized fully the ICC and other international institutions Kenya is a member.

The Kenyan rulers  to do this job without any obstacle they have to prepare the  Chief Justice Evan Gicheru  to exit before the  enactment of this  new supreme law which will dope ICC.  They have to Sworn in a new Judicial Service Commission that should play a key in this manipulation of the Kenyan constitution with high responsibility the appointment a new Chief Justice in the image of Rwanda.

These high manipulators of the Kenyan highest law the newly  referendum passed constitution by the  in government is that if both Chief Justice Gicheru and Mr. Wako leave office alongside major steps towards reform completely changing the Kenyan Judiciary.

They also wanted to change the State Law Office and the Police Service; Kenyan and manipulators thought they will have headway to petition the ICC directly or through the United Nations Security Council. They thought this would suspend the hearings on the six Ocambos by the ICC, on the excuse that they are doing it themselves like Rwanda. And thus

President Kibaki and Mr. Odinga agreed to manipulate the ICC ways of getting the six off The Hague tentacles, since they know they  one has direct and the other  indirect  responsibilities  of the killings of 2007, while the six  took orders . This leaders during elections day of 2007 which brought one to power and the other contested like Ivory Coast .Both are in agreement  that they will  would still  establish a local tribunal to try  post-election violence suspects.

The two responsible for the outcome of the 2007 election also agreed behind doors, but publically showed reluctant to the  Motion that was passed by MPs urging the government to withdraw from the ICC and repeal the International Crimes Act.

Mr. Moreno-Ocampo who saw the ICC officials before them played double standard when it comes to the Ethiopian election of 2005   resumed working fast in order not to repeat the same mistake by unnecessary delay in Kenya.  The judges of Pre-Trial Chamber II expected to start scrutinizing the cases to determine whether the prosecutor has a case against the six Kenyans. They are expected to make their ruling either by the end of next month or early March.

As planned the Chief Justice Gicheru is set to walk away by February 27, while Mr. Wako’s record 20-year reign is set to end by August. In order to out run ICC judges there are indications he may be persuaded to leave earlier.  These are the guys who gave the hands of the PKK leader Abdullah Öcalan to the Turks  rather than independent  court through a third country in front of ICC or other tribunals.  Such  corrupted  act did not help the Turks or the Kurds to solve the century year old paralysis of Asia Minor on the  “The Question of Kurdistan” to a negotiated solution like Southern Sudan  to this  day.

Kenya needs a true democracy corruption and constitutional manipulation, foreigner persecution is a daily phenomena. If it continues with this rhythm the country will join its north eastern neighbor to be a fallen state.