Mubarak fired everybody, but forgot himself as a true dictator… 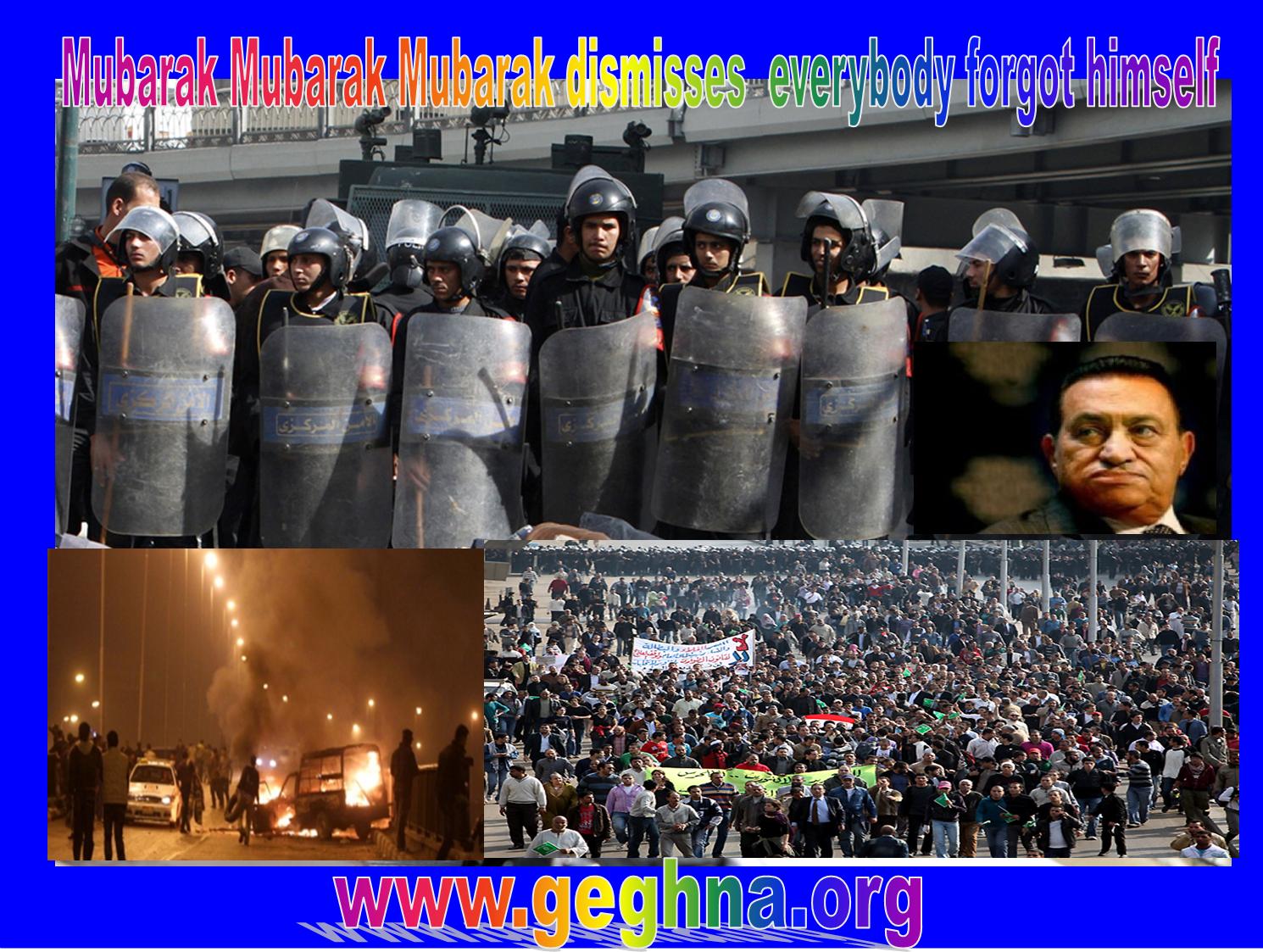 The overdue Egyptian dictator  Hosni Mubarak appeared on television  late Friday  for the first time since the eruption  of the North African  social Tsunami on the streets of his capital,  refusing to accede to popular demands he fired everybody  but forgot himself  as a  dictators. The modern Egyptian Pharaoh Mubarak announced that he was dismisses the Egyptian government and that he would see to appointing a new government just in overnight, like he would buy it from down town Giza besides the pyramid.  Arbo African dictator of the Nile not knowing the end has come when he declared  that he will press ahead with social, economic and political reforms after three decades of forgetting. He is not ashamed to praise the security forces’ crackdown on protesters.

Protesters have seized the streets of Cairo, battling police with stones and firebombs, burning down the ruling party headquarters, and defying a night curfew enforced by a military deployment. It is the peak of unrest posing the direst threat to Mubarak in his three decades of authoritarian rule.

The government’s attempts to suppress demonstrations appeared to be swiftly eroding support from the U.S. – suddenly forced to choose between its most important Arab ally and a democratic uprising demanding his ouster. Washington threatened to reduce a $1.5 billion program of foreign aid if Mubarak escalated the use of force.

The protesters were sure to be emboldened by their success in bringing tens of thousands to the streets in defiance of a ban, a large police force, countless canisters of tear gas, and even a nighttime curfew enforced by the first military deployment of the crisis.

While Cairo is burning not be the same again the smoke  rose in cities across Egypt as police cars burned and protesters set the ruling party headquarters in Cairo ablaze. Hundreds of young men tore televisions, fans and stereo equipment from other buildings of the National Democratic Party neighboring the Egyptian Museum, home of King Tutankhamen’s treasures and one of the country’s most popular tourist attractions.

Young men could be seen forming a human barricade in front of the museum to protect it.

The protestors are seen around the city looted banks, smashed cars, tore down street signs the images of the dictator and pelted armored riot police vehicles with paving stones torn from roadways.

Mubarak seemed faced with the choice between a deadly crackdown and major concessions to protesters demanding he step down this year and not hand power to his son, Gamal.

The once-unimaginable scenes of anarchy along the Nile played out on television and computer screens from Algiers to Riyadh, two weeks to the day after protesters in Tunisia drove out their autocratic president. Images of the protests in the smaller North African country emboldened Egyptians to launch four straight days of increasingly fearless demonstrations organized over mobile phone, Face book and Twitter.

The government cut off the Internet and mobile-phone services in Cairo, called the army into the streets and imposed a nationwide night-time curfew. The extreme measures were ignored by tens of thousands of rich, poor and middle-class protesters who united in rage against a regime seen as corrupt, abusive and neglectful of the nearly half of Egypt’s 80 million people who live below the poverty line of $2 a day.

Until Mubarak’s brief appearance on television early Saturday morning, he was ducking from appearance or statement and other senior figures in the regime were also notably absent.

Security officials said there were protests in at least 11 of the country’s 28 provinces, and unrest roiled major cities like Alexandria, Suez, Assiut and Port Said. At least one protester was killed Friday, bringing the death toll for the week of protest to eight.

Demonstrators were seen dragging blooded, unconsciousness fellow protesters to waiting cars and on to hospitals, but no official number of wounded was immediately available.

According to medical sources at least five protesters have been killed and 1,030 wounded in Cairo. Thirteen were killed in Suez and six in Alexandria, putting the current death count at 24.

The crowd included Christian men with key rings of the cross swinging from their pockets and young men dressed in fast-food restaurant uniforms.

In downtown Cairo, people tossed cans of Pepsi and bottles of water to protesters on the streets below to douse their eyes, as well as onions and lemons to sniff, to cut the sting of the tear gas.

The US is in attainable position being between the hammer and the hard thing. It high time the US changes its position and be to the right time of history to words the Horn of African dictators like Melee Zenawie, since the force of change will eventually burn African dictators too.

Obama administration appealed for Egyptian authorities to respect the rights of citizens and halt the crackdown on swelling anti-government protests. It again urged the government of Egyptian President Hosni Mubarak to bend toward demands for political and economic reform. The State Department urged Americans to defer any non-essential travel to Egypt.

Some of the most serious violence Friday was in Suez, where protesters seized weapons stored in a police station and asked the policemen inside to leave the building before they burned it down. They also set ablaze about 20 police trucks parked nearby. Demonstrators exchanged fire with policemen trying to stop them from storming another police station and one protester was killed in the gun battle.

In Assiut in southern Egypt, several thousand demonstrators clashed with police that set upon them with batons and sticks, chasing them through side streets.
Protesters appeared unfazed by the absence of Nobel Peace laureate Mohamed El Baradei, one of the country’s leading pro-democracy advocates. The former head of the International Atomic Energy Agency was soaked with water cannon as protests erupted after Friday, and then prevented by police from leaving after he returned to his home.

A Face book page run by protesters listed their demands:-

The Egyptian Dictator, Mubarak has not said yet whether he will stand for another six-year term as president in elections this year. He has never appointed a deputy and is thought to be grooming his son Gamal to succeed him despite popular opposition. According to leaked U.S. memos, hereditary succession also does not meet with the approval of the powerful military.

The diehard dictator and his government have shown no hint of concessions to the protesters who want political reform and a solution to rampant poverty, unemployment and rising food prices.

Mubarak continuing the heavy-handed methods used by the security forces the past three days would probably buy the Mubarak regime a little time but could strengthen the resolve of the protesters and win them popular sympathy.

The alternative is to introduce a package of political and economic reforms that would end his party’s monopoly on power and ensure that the economic liberalization policies engineered by his son and heir apparent Gamal over the past decade benefit the country’s poor majority.

Even if he lift the emergency laws in force since 1981, loosen restrictions on the formation of political parties and publicly state  he will  not stand for another six-year term in elections this year, will not save him.

Egypt’s four primary Internet providers – Link Egypt, Vodafone/Raya, Telecom Egypt, Etisalat Misr – all stopped moving data in and out of the country at 12:34 A.M. Friday, according to a network security firm monitoring the traffic. Telecom experts said Egyptian authorities could have engineered the unprecedented cutoff with a simple change to the instructions for the companies’ networking equipment.

The Internet appeared to remain cut off in Cairo but was restored in some smaller cities Friday morning. Cell-phone text and Blackberry Messenger services were all cut or operating sporadically in what appeared to be a move by authorities to disrupt the organization of demonstrations.

The African and the rest of the Arabic dictators will soon pay the same price and not one will save them from the coming street social Tsunami of 2011. We heard many dictators are moving their families to the west fearing the coming social eruptions.