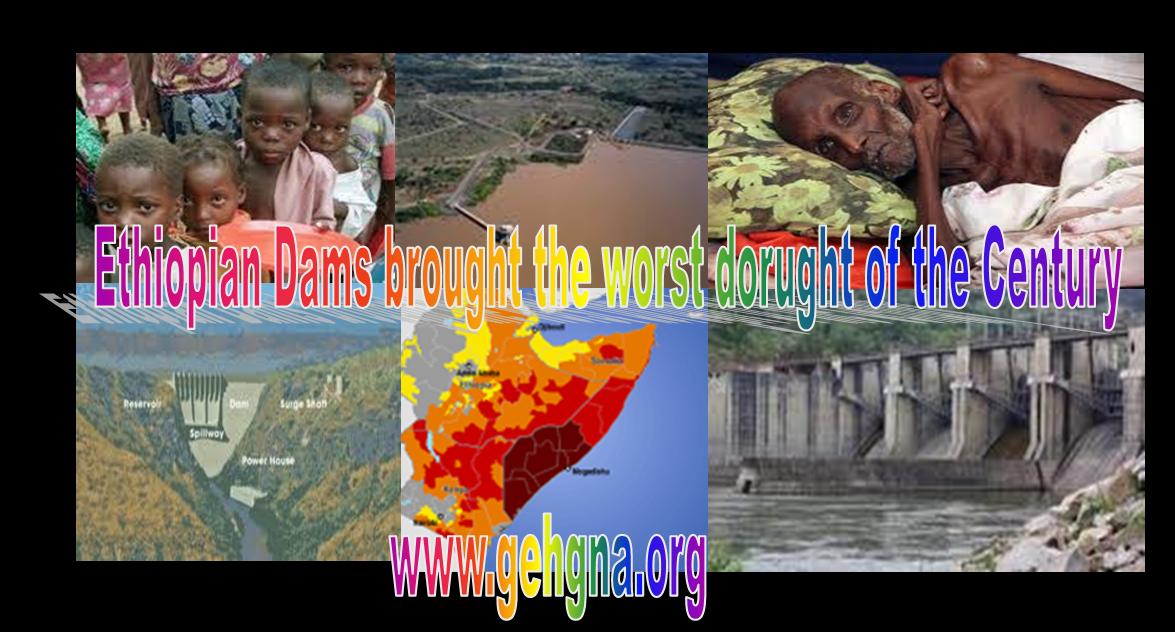 The  famine in the Horn of Africa used be blame mainly for the drought caused by the global  climate change ignoring the pricipla culprit the  the dictatorial regime.  In the past the same  has brought regime change in country of  hunger Ethiopia two times,  that of the Negus in 1974 and the Derg  Military Junta in 1991. As the French says there is no two without three, we expecting a regime change in the country since all conditions are meeting as those of the last two experiences    due to the starvation in Wello in 1974 and in Tigre in 1984 which cost the lives of millions in the past. The main culprit for this in human repeated catastrophe this day has been mainly given to the extreme weather conditions demonstrated by hurricanes, floods, droughts all over the globe.

The current drought conditions have been caused by successive seasons with very low rainfall due to wanton construction of the dams all over Ethiopia by the dictatorial regime of Melese Zenawie. Over the past decade the Horn of Africa has experienced consecutive failed rainy seasons having direct co-correlation in this period of intensification of damming in the region.  According to surveys of local communities, this is part of a long-term shift as seen in Borana communities in Ethiopia report that whereas droughts were recorded every six to eight years in the past, they now occur every one to two years since the construction of dams in Omo and Shebelle rivers. Since the construction of  the Mega dams in the Southern Ethiopia  the regional meteorological data supported  the argument by demonstrating the increase of the  annual temperatures from 1960-2006 by 1C in Kenya and 1.3C in Ethiopia, and the frequency of hot days is increasing in both countries in the region of the dams. However, more recent research suggests that rainfall decreased in the rainy seasons of March to June.  When it comes to records and data collections like Europe and America climate change could not   be attributed to the Horn of Africa’s drought, since t the current drought is directly climate change. True, there are now a few cases in which scientists have been able to estimate the extent to which man-made climate change has made a particular extreme weather event more likely, but these exercises require reliable long-term weather data that only exists for Europe and North America – no such studies as yet exist in the case of the current drought.

What about the future? Globally, climate change modeling projects an increase in the frequency and severity of extreme weather events like droughts and floods. In the absence of urgent action to slash global greenhouse gas emissions, temperatures in the region will probably increase by 3C-4C by 2080-99 relative to 1980-99. The combination of higher temperatures and more unpredictable rains is alarming for food production. In a   recent estimate horn of Africa could suffer a decline in the length of the growing period for key crops of up to 20% by the end of the century, with the productivity of beans falling by nearly 50% if the dictatorial regimes continue letting land grabbing and disfranchising the local family hold farmers and pastoralist for the sake of this international speculators.  More over, the dam is prepared for these grabbed lands irrigation for an eventual cash crop cultivation of exportation.

According Nobel prize-winning economist Amartya Sen that drought is caused by lack of rainfall, famine is man-made, and thus famines do not occur in functioning democracies.