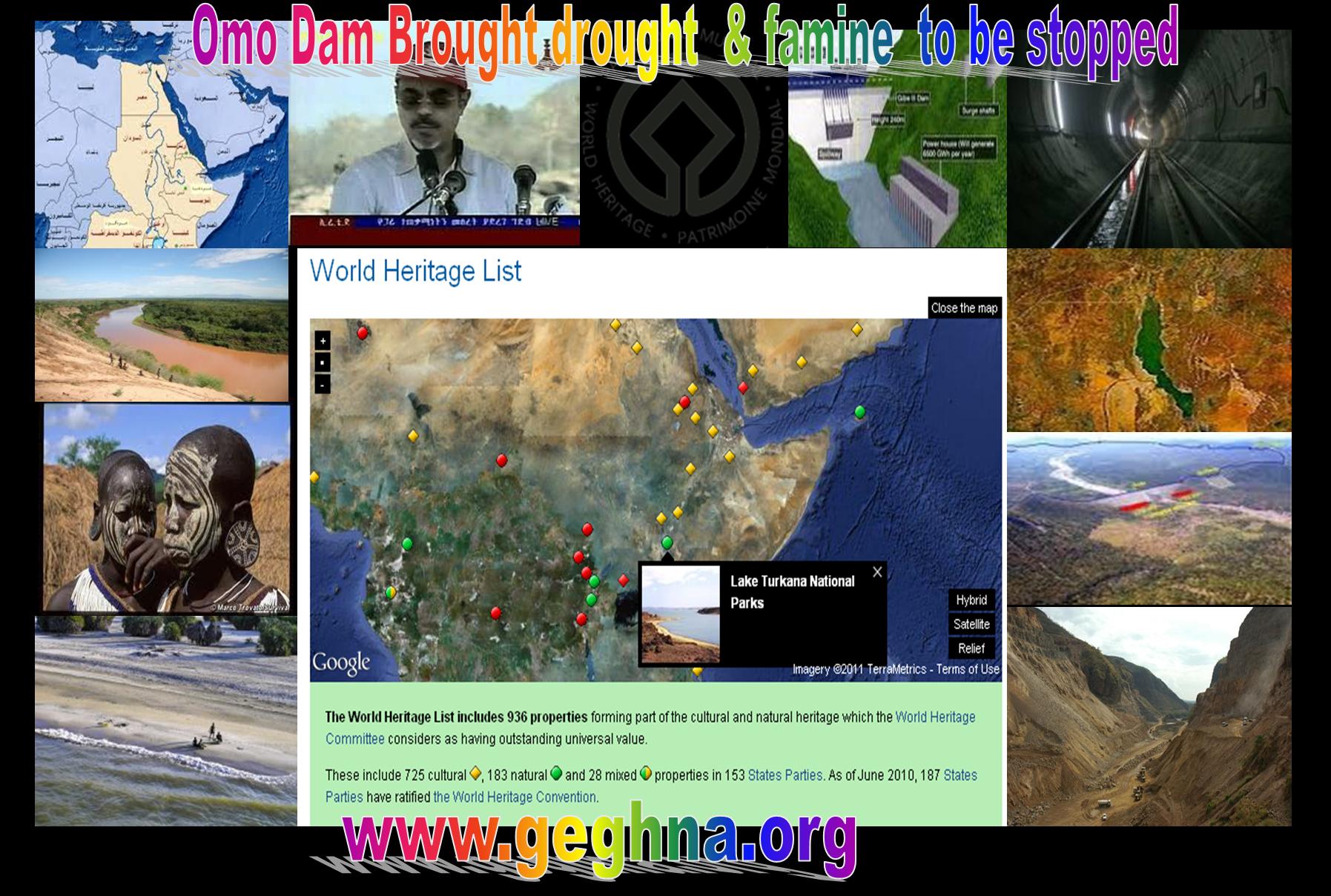 The  World Heritage Committee heard our over  two years old appeal  to  stop the Ethiopian Dictator  and the anti environmentalist  three gorge dam    Chinese financiers to  suspend the death dam called Gebe III; which eventually will eliminate  the Omotic people by  drying the naturally reserved world heritage Lake Turkana. We hopping the same august body will do to stop the other death dam on the Nile River known as “Millennium Dam which eventually dries the Nile and Lake Tana with unpredicted catastrophic result on the population of the region from Blue Nile down to Egypt. The recent famine and drought is the direct consequence of the these death dams :- Gebe I. II, III & that of the dam on the Shebelle river the only live water source for all the inhabitants of Southern Somalia. Wabe-Shebelle Death Dam is located 785 km South-East of Addis. the deadly dam he project has 2238.19 Mm 3 live storage between 580m and 535.41m, with a  power system of  111 m high. This is the main dam responsible for the drought in the Shebelle Juba region of Somalia by controlling the annual floods in a region the annual rain fall is not sufficient. Today from such dam with that of the Om or river dams the region is highly affected by unprecedented drought. The Ethiopian dictator is fully responsible to this in human act of eliminating million of inhabitants in the region. Unless he is stopped immediately he will transform   the whole region into a desert. Lake Turkana in Northern Kenya is the world’s largest desert Lake which would   eventually dry up like that of the Gobi Lake in Asia which has now ceased to exist.   This unique ecosystem has made it an outstanding living open laboratory for the study of plant and animal communities according to World heritage. The Lakes’   rich fossil finds that have allowed reconstructing the history of animal species and mankind over the past 2 million years will cease to exist by the Ethiopian water dictator Melese Zenawie.  Lake Turkana due to its unique properties in 1997 was recognized and protected as a World Heritage Site. It blood line the Omo river the home of Lucy and Ardi also pouring   this  menaced Lake over 90% of its life giving water source. The creation of dams on Omo rivers have recently accelerated the desertification by  causing unprecedented drought which caused the destruction of  over 10 million people in downstream  Kenya and the damming the Shebelle river damaged the Shebelle river farmers of Somalia. This was confirmed by the recent study study commissioned by the African Development Bank that the dam would likely cause a significant drop in the lake’s water level, increase its salinity, and threaten the unique ecosystem for which the lake was recognized as a World Heritage Site in the first place. According to the international waters the Gibe III Dam is being built by an Italian company. ICBC, a Chinese state-owned bank, has approved funding for the project, and China’s export credit agency is financing the transmission lines. The dam would not only have devastating impacts on the Omo River and Lake Turkana, but also on the 500,000 indigenous people who depend on the river and lake for their livelihoods. The  World Heritage Committee, which oversees the protection of World Heritage Sites around the globe, in its  annual meeting heard our cry  and  decided to take action for the protection of Lake Turkana.  The two  culprit  country Ethiopia and China   being two of the 21 members  of the  organization   did stop the august body to take  the following decisive  motions against their proactive corrupting  lobbies   :-

The following are the world Heritage in Ethiopia but still we have a lot of world hertage in my an place in Ehtiopia in the islands of Lake Tana which are not yet explored. Thus Lower Valley of the Omo where the dictator is constructing his mega dams are reserved areas.