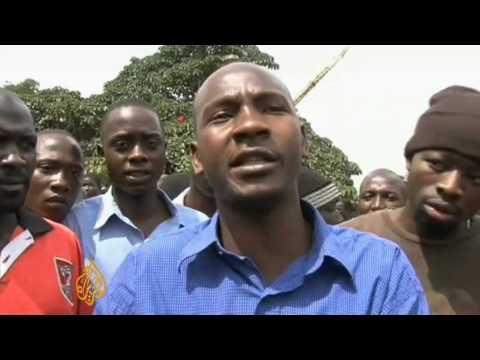 In Ethiopia the Historical  over  thousand of  years Zege Church burned recently  by the regime No body moved a finger. The Great Buganda people has just declared revolution while the Ethiopians are sleeping . The Ethiopians must learn from Uganda and defend their cultural identity.  Imagine a Mosque is just touched what will happen? Where is the justice…? Where are the defender of international cultural Identity ? Where are the  so called Christan world ?  Specially The orthodox World  Russia ,  Greek 8 Eastern Churhes   etc… Where are our brothers the  Muslims defender of a true faith no word in their site about this great church ? Where is our ecumenism.  Where is UNESCO in Ethiopia ?

The Buganda kings like  Toree’s  kings claim their descendants from Ethiopian Kings they gave the name to the country what is called today  the post colonial Uganda. Uganda is off time konwn as the  Perle of Africa.

Buganda is a kingdom located on Lake Victoria; Over time it expanded by means of conquest; in the 19th century it covered a large part of what is Uganda today, including the site which was to become Uganda’s capital, Kampala. It has an old relation with the Abyssinian kingdom. it was interpreted by the Scramble of Africa  and the coming of the European powers in the region.

In the 19th century, Buganda was visited by western travelers : J.H. SPEKE (1862), HENRY MORTON STANLEY (1876). Their reports picture a state of considerable size and authority, the capital at LUBAGA HILL a town of 40,000, the armed forces consisting of 125,000 troops and a ‘navy’ of 230 war canoes.
Anglican missionaries arrived in 1877; Catholic missionaries in 1879; soon, protestant (Anglican), catholic and islamic groups intrigued against each other at Buganda’s court. Clashes between rival factions resulted in massacres; as political leaders frequently changed, so did the victimized communities; in 1885, Kabaka Mwanga ordered the execution of 1 Anglican missionary and of 30 Catholic converts.. Thousands of people in Uganda belonging to the Baganda kingdom have held a riot at the tombs of their late kings, which caught fire last night.

The grass thatched building which contained the five tombs of late kings, all the kings to have ruled Buganda kingdom in the last 100 years, caught fire last night. According to a police officer at a police post near the tombs, Chris Sali, the tombs caught fire at 8.30 but there are different versions about the cause of fire.

Meanwhile, some people in the Buganda kingdom have accused the Ugandan government of setting the fire on the tombs. The government has vehemently denied the allegations.

Thousands of angry people stormed the tombs after the fire and started mourning. They fought with the police who had been deployed to contain law and order. Four people have been admitted to hospital (Mulago) in Kampala after having sustained severe injuries.

Although President Yoweri Museveni restored Ugandan Kingdoms in 1993 — albeit establishing them as non-political cultural institutions — after they were abolished in 1967 by President Obote, the Baganda believe that the President has tried to limit the influence of the Buganda Kabaka (King).

Last September, clashes erupted in the Ugandan capital, Kampala, following a planned visit by King Ronald Muwenda Mutebi of the Buganda kingdom to the central district of Kayunga. About 20 people were killed.

Kayunga, which is part of the Buganda kingdom, is believed to be inhabited by mostly non-Baganda. The riots were sparked when the minority community in the largely Buganda populated area opposed the King’s trip.

The Kayungas who opposed the visit of the King said they had seceded from the Buganda Kingdom, while insisting that the Kabaka’s visit was politically motivated. A detail that is prohibited by the 1993 deal that restored the kingdoms.

The Baganda have been advocating for constitutional powers for Kings through the restoration of a federal administration that would formally recognize the political power of their King.

Buganda is the largest and most politically powerful kingdom with about 20 per cent of the total Ugandan population and constituting the largest single ethnic group in the country.

The Kingdom is strategically located in the central region along the shores of Lake Victoria and houses the nation’s capital, Kampala.

The Baganda have an estimated population of about five million people.

During the colonial era, Buganda became the most influential kingdom in Uganda when the British rewarded it for its collaboration by giving it territories that belonged to the western kingdom of Bunyoro.

Many Baganda have, for several years, unsuccessfully lobbied the government to introduce a federal form of government that would give some autonomy to the regions.

Who burnt the Kasubi Tombs?

The Buganda royal site, the Tombs at Kasubi, have been razed to the ground in a fire that swept through the premises shortly after 9:00p.m. on Tuesday night, March 16, 2010.

Witnesses at the scene at the time of the fire said it had started without warning or build up and appears to have been the work of an arsonist.

Hundreds of distressed and wailing Baganda gathered at the burning building and tried desperately to extinguish the fire but were reduced to tears and helplessly watching the grass-thatched complex go up in flames.

When the police arrived, it too failed to put out the fire and when the crowd got rowdy, gunshots and teargas were fired in the air, further angering the crowd.

As gleaned from the TV footage, the anger of the crowd gathered at the tombs appeared to be directed at President Museveni, with many voices caught on camera angrily declaring that no matter what, one day he would perish in a fire too.

SMS text messages flying about in Kampala mentioned the fire and usually pointed the finger at Museveni.

The Katikiiro of Buganda, J.B. Walusimbi, Prince Kassim Nakibinge, and Buganda Information minister Medard S. Lubega were among the senior kingdom officials first at the scene.

The tombs, listed as one of hundreds of World Heritage Sites by the United Nations cultural agency UNESCO, were one of the most visited historic sites in Uganda.

Built just over 100 years ago, they are the traditional burial ground of Buganda’s kings, as well as the repository of some of the most valuable and irreplaceable cultural artifacts in Buganda.

Who set the royal tombs on fire?

The Daily Monitor newspaper, in its edition of Wednesday March 17, 2010, quoted eye witnesses as saying that a white pickup without number plates was at the scene.

A woman spoke of seeing a white box left at the tombs, then a loud explosion just before the historic site burst into flames.

When nearby motorcycle riders tried to block the pickup, now speeding off the scene, somebody inside or seated on the outside of the vehicle fired in the air to disperse the motorcycle riders.

“[T]he fleeing man shot in the air to scare away riders in his pursuit,” the Daily Monitor reported.

This, clearly, was an act of arson and sabotage. Whoever lit that fire knows what the Kasubi Tombs mean to Buganda. It is like setting fire to the Tomb of the Unknown Soldier at Westminster Abbey in London, historic burial site of some of England’s most revered figures.

The purpose of burning Kasubi Tombs would have been two fold.

From the point of view of one trying to cause the Museveni government to lose any remaining support in Buganda, it would have been to trigger off riots or deep and boiling anger among the Baganda.

From the point of view of a state actor, to set the tombs on fire and destroy them would achieve the goal of creating conditions of such unrest and insecurity as to warrant the proclamation of a state of emergency in Buganda.

Whatever the truth, this was an act of supreme political sabotage, not mere arson. The only act that would exceed this would be to assassinate the Kabaka of Buganda or to burn down one of his palaces.

The fact of a loud explosion preceding the break out of a fire was the hallmark of the fires that struck Budo Junior School and several others schools in and outside Kampala in 2008 and the Park Yard Market near Nakivubo Stadium in 2009. Explosives were used.

What makes the Kasubi fire even more suspicious was the reported firing in the air by the getaway car. Had the tombs been set on fire by an ordinary arsonist, he would have made it his top priority to flee the scene as quietly and inconspicuously as possible. To fire gunshots in the air could only attract attention.

More importantly, to have the audacity to fire gunshots in the air suggests the confidence of an arsonist with some measure of state protection, or membership in the official state security and military apparatus.

In its reporting and discussion of the fire on Wednesday morning, NBS television kept receiving SMS text messages from viewers mentioning their belief that it was the government.

As the fire raged on Tuesday night, the Catholic Church-run radio station, Radio Maria, kept receiving phone calls by listeners accusing the government of being behind the fire and had to discontinue the discussion for fear of being accused of inciting the public.

It was noticeable, on Wednesday morning, that most FM radio stations in Kampala avoided discussing the fire during their breakfast shows, mindful of what live phone calls from listeners would say and knowing the risk they run in having their operating licenses withdrawn.

The caution taken by the radio stations not to discuss the fire in itself reflects the widespread anger among the public and their belief that this was a state-orchestrated attack on Buganda.