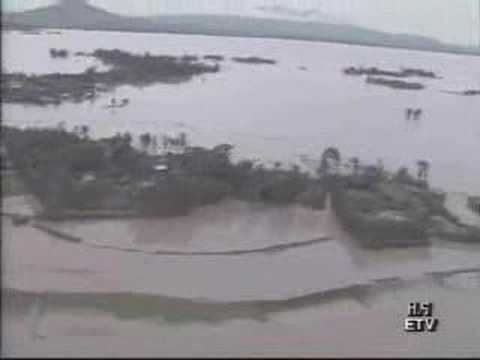 Gebe I an Ethiopian   dam built on Eastern Africa’s separating tectonic plates without any geological survey has been over run as predicted and destroyed many farm lands with the loss of unknown number of human and animal lives.  A dam constructed with a simple order of the ruling dictator   has started costing lives and farms. The undetermined number of Omotic population killed like that of the 2006 floods. Such forced runoff will precipitate the eventual collapse of dams within 24 months after the flood creating a slope gradient of the soil surface near the gully as the recent studies predict in 40 % of the case.

The news passed in silence in a country where the regime does not tolerate critics when it comes to its megalomaniac constructions. In Ethiopia writing any article concerning the deadly dams is a taboo in a country where almost all the independent media are closed and the remaining journalists are fleeing. And the foreign independent Medias are not allowed to go and see and report, since dam construction has brought too much critic to the ruling dictator in the recent days. The only article about the looming catastrophe is a government media recently published in Amharic in order to keep it from international attention. The government gave the following biased information by the government controlled media Reporter   on 25 August 2010.  The governmental organ The Reporter   did not even care for the human and animal lives but on the generator which they claimed that “it will cost over 20Million”. They claimed “it was burned out by the mass flow of uncontrolled water.”   The main objective of such   disinformation is to hide the main cause of destruction which is high rain on the Ethiopian altitude and the tectonic movement which is active in the region.

The article gives contradictory statements that the water was released from the dam by the  electricians, at the same time it is reported that  the water over  run the dam due to the mass rain fall. The release of water in upstream by Gibe I could have a catastrophic repercussion on Gibe II and Gibe III which is not yet finished.

The dead bodies only would be found in downstream near and  around lake Turkana  as that  of the 2006 dam water release  incident in the tectonic death dams:- “The death toll from flash floods in Ethiopia rose Monday after police reported an unknown number of bodies had been found in the country’s southwest, where 364 deaths have already been confirmed. The discovery of bodies on a remote delta in the flood-ravaged Omo River valley near the shores of Lake Turkana, on the Ethiopian-Kenyan border, came as authorities stepped up evacuation warnings in low-lying areas nationwide. ” Terra Daily Aug 21, 2006

This time year the government did not even issue a warning with the increasing flood all over the Ethiopian Highlands which left over 270000 people homeless.  This year all dams around Ethiopia are threatened.  The massif rain fall has flooded huge areas in the southwest, Koka dam on the Awash River in the east, and the Tise Abby on the Blue Nile in the north.

In Ethiopia like the flood 2006 hundred thousand farmlands   has been flooded due to the heavy rains that pounded the region.

This year the monsoon rain has been heavy in Ethiopia as that of the Pakistan and China. The different is the Ethiopian highland plateau drains the water faster to the lowland valley in Omo and Afar regions menacing the dams, where in Asia the water floats.  Heavy rain land slide and flooding will deteriorate the existing famine in the country.  The Ethiopian famine is not only the outcome drought but also heavy rain in the harvest   season which wipes out the farmlands and the mismanagement of the consecutive regimes which came to power in the country. The present regime perpetuates to existent to use it as a source of income to stay in power. The group  in power today had used in the past the Band Aid internationally raised fund by Bob  Geldof in 1984/85  to buy arms at the expense of the starving  millions.

The Ethiopian high land plateau is flooded once again and most of the rain in the south and east will storm the dams in the Gebe and Awash Rivers found the rift valley.  Today asking people who live around the dams to move to higher ground to take precautionary measures, as the rain in the highlands is increasing and dams start over flooding with  water beyond their capacity is not enough as prevention measures. The best solution is to find the main cause of over flooding, which is so called the government flood control method created by pyramidal dams.  The Ethiopian Dictator has to stop constructing them on such sliding land moving ground like that of Omo, since the region is situated in moving plates of the Eastern African Rift valley. One would not try to connect two separating plates by dam which will end up cracking and in the end will bust causing millions of lives down streams, unless you are a dictator and you have the world at your disposal.

Ethiopian Water Dictator Melese Zenawie promised to export electricity to Kenya, Sudan, and Djibouti in September 2010 after the rains and   at the cost of the lives of the riparian population. The dictator forgot in his formula two equations:-

– One the riparian population that he calls insects or butter flays considered as dispensable,

-two  the floods and the sliding soil  which is out of his personal control  or with that of  China which could not even control  its own dams,   flood and sliding mud.

Melese Zenawie’s promised amounts were: — 230 kilovolt to Djibouti, 500 megawatts of electricity to Kenya & 200 megawatts to Sudan.

These promises are built on sinking sands seeing the geological situation of the moving plates creating a new ocean in the horn of Africa at the site where the Pharaoh is constructing his dooms day pyramidal dams.

The final solution would be to Stop Damming and start making alternative energy. Most of all start satisfying ones won needs before even thinking to export. The hypothetical electrical megawatts   offers to the neighboring countries is  just a pretext by the ruling Dictator to galvanize  funds from financial institutions like  African development  and World Banks,  that  have already  started to be  skeptical  to these megalomaniac  catastrophic dams of the Ethiopian Water Dictator. 30 Aug 2010 17:03:00 GMT
Source: Reuters
By Barry MaloneADDIS ABABA, Aug 30 (Reuters) – More than a quarter of a million Ethiopians are risk from severe flooding next month when heavy rain is expected in the country, according to government estimates issued by the United Nations on Monday.

The U.N. Office for the Coordination of Humanitarian Affairs (OCHA) said 19 people were killed in mudslides after flooding last week and nearly 12,000 people had been displaced since then.

“Some 270,000 people could be affected by flooding in the (Amhara region),” OCHA said in a statement, quoting a contingency plan issued by regional authorities.

Flooding often affects Ethiopia’s lowlands during the rainy season between June and September. In 2006, more than 1,000 people were killed and more than 300,000 made homeless.

“New flooding has been reported in recent days, including in the eastern Amhara lowlands and in northern Somali Region,” it said.

The plan says $6.8 million would be needed to respond to such an emergency.

The country’s disaster management office gave a lower estimate, saying 153,000 people were likely to be affected by next month’s floods, of whom 25 per cent could lose their homes.

“Good contingency planning needs to be in place,” an aid worker monitoring the flooding told Reuters. “According to data from the meteorological office, the heavy rains will continue through September.”

Almost 5,000 people who fled to higher ground are now stranded and inaccessible to local authorities, according to the OCHA statement.

Ethiopia’s Hydro Plans Get Stuck in the Mud

Source: Reuters
By Barry Malone
ADDIS ABABA, Sept 2 (Reuters) – Ethiopia on Thursday rejected criticism of its massive hydropower dam projects and vowed to push ahead with plans to boost its power generating ability from 2,000 MW to 10,000 MW within five years.

The Horn of Africa nation’s ambitious dam building programme has drawn fire from human rights groups as well as from Egypt and other Nile River countries.

“We have a plan to reach 10,000 MW within the coming five years,” mines and energy minister, Alemayehu Tegenu, told Reuters in an interview.

“Most of the energy we plan to generate will come from hydropower.”

Ethiopia is overwhelmingly reliant on dams for its energy needs and has opened three over the last year, bringing the total number in the country to seven.

Another two are being built, including the huge Gibe III — a project that foreign charities say could leave more than 200,000 people reliant on food aid.

Rights groups, spearheaded by Survival International, have started an online campaign against the dam, which would generate 2,000 MW, and are lobbying international lenders not to contribute to its 1.4 billion euro ($1.79 billion) cost.

“These organisations do not want Ethiopia to develop,” Alemayehu said.

“Criticising countries like Ethiopia is their source of income. They have no reason to attack our dams. We have environmental and social plans in place.”

The European Investment Bank (EIB) said last month that it had decided not to help fund the project but did not say why it had made that decision.

Alemayehu said it was possible the EIB had been pressured by rights groups.

“But I don’t know their reason,” he said. “It’s not a big problem for us. We have other options. And the funding at the moment is coming from our government.”

Ethiopia’s hydropower plans are also closely watched by Egypt and Sudan who fear more dams on Ethiopia’s stretch of the Nile could leave them thirsty.

The five signatories have given the other Nile Basin countries — Egypt, Sudan, Burundi and Democratic Republic of the Congo — one year to join the pact but the countries have been split by behind-the-scenes rows since the signing.

The nine countries are due to meet again in the Kenyan capital Nairobi in November.

“What we will construct on the river will never cause any problems for the Egyptians,” Alemayehu said. “But the Egyptians always stand against Ethiopian development. They need to understand better what we are planning.”

Alemayehu, however, ruled out the possibility that war could erupt over the Nile.

Ethiopia plans to export power to neighbouring Sudan, Djibouti and Kenya as soon as it meets its own growing energy needs, Alemayehu said.

Ethiopia rationed power for five months this year with outages every second day, which closed factories, hampered exports and fuelled a currency shortage.

“We should have no need to ration power in 2011 with our new dams,” Alemayehu said. “We are now building interconnectivity infrastructure with Sudan and Djibouti and that should be finished within six months.”