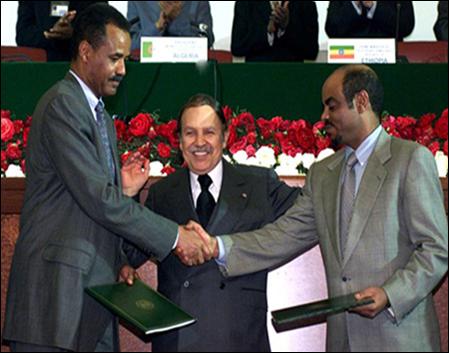 ﻿The recent ICG group analysis about  Eritrea   has been based on sets of  journalistic  ideological premises which concluded that ;   “ Authoritarianism  is Hemorrhaging Eritrean legitimacy of the state and  leading to become a fallen state“  from  being a   Siege state.”  The same analysis is fully applicable to the Ethiopian regime led by Asmara’s boy    Melese Zenawie.  ICG’s    stated objective on writing the Report N° 163 of 21 Sep 2010 is supposedly

“To prevent Eritrea from becoming the Horn of Africa’s next failed state “. This is Report in contradiction with different international analysis given to the definition of failed state to this day. Furthermore,   the report failed to give the   definition and deference between failed and siege states.  It rather enumerated historical chronology of events than defining the dynamics of a failed or regime in siege.  The paper lucks a conceptual and methodological frame work or a research approach to a failed state.

If we take the 2009 failed state index according to Foreign Policy, Eritrea  stood 36th 20 point better than Ethiopia on the 16th place  among 177 countries of the world failed state index, that simply means Ethiopia is worst than Eritrea. This analysis has given detailed parameters that defined failed states. While   the ICG Report did not even defined what a state in siege means in order to demonstrate Eritrean domestically aggravated siege. The Fund for peace defined Failed sates based on the following indicators:-

The ICG report further accused the Ethiopian regime as a responsible and not Eritrea for the Somalian crisis as a traditional enemy contradicting to the recent UN sanction.  ICG recognized Eritrean support for the proxy warriors of the region from Somalia up unto Darfur passing by Ethiopia. The Report in term failed to make the real comparison between the two failed states since both countries are preparing proxies   against each other and by extension in Somalia. They preferred to fight via proxy in Somalia than in Bademe, Asmara, and Mekele etc… The UN sanction would have been imposed on both failed sates of the Horn of Africa not only Eritrea. Since both uses Somalia as their battle ground for proxy wars.

ICG affirmed that the recent Gold Bonanza of Eritrea will strengthen her 20 years radical line of action in domestic and regional polices. I think we have to wait rather than making a precipitated prediction, since “one who laughs last laughs the best,” when it comes to the Horn of Africa. It is expected a full reversement of relation in the region even between Addis and Asmara in the very short foreseeable future. Since it is very easy to make peace with once friend today’s enemy rather than acquire a new one in the complex socio political situation of the Horn of Africa.

The International Crisis Group (ICG) in its Report N°153, 4 Sep 2009 has well demonstrated   the Ethiopian regime’s Ethnic Federalism and its decentralized state. Its Report N°141 of 17 Jun 2008 was pertinence to the point by demonstrating the fragile peace between Eritrea and Ethiopia   with a risk to a new confrontation.  The report further affirmed that their No Peace No War situation  is a  major source of instability  for  Somalia as demonstrated  with that of  Ethiopia’s refusal to accept virtual demarcation,  and affirming  that   Asmara’s unilateral implantation    would  shatter  the status quo.   This last assessment was proved wrong; despite to the ICG’s 2 years old report the conflict did not spark   Scaramouch leading to war to this day.

We think that ICG’s in the future has to make an objective report without making impartiality between the Horn of Africa’s belligerent failed states.  These failed states of the Horn act like they have a hidden red telephone between the two discussing the arts and the techniques how to maintain each other in their respective power via proxy war in Somalia. IF a new public dialog between the two is struck, the next day the Somali proxy war will end. They are the instigator of the 20 years of crisis one way or another, Somalia has been a stateless since they came to power almost two decades ago. When you see Eritrean leaders you have seen Ethiopian leaders, since they are the opposite faces of the same coin.

Any foreseeable   analyses to make a reasonable   prediction  about   these two failed states is not an easy task   using  traditional  simplistic  journalistic affirmations,  which are generally  hasty  and full of  highlight  and  short of  any substance. And it is not that simple to grasp or understand the internal dynamics of the horn of Africa’s politics to engage oneself to   make any reasonable futuristic prediction.

Please read the different Report on Eritrea and Ethiopia and make your comment directly to the group.

To prevent Eritrea from becoming the Horn of Africa’s next failed state, the international community must engage more with the country.

Eritrea: The Siege State , the latest report from the International Crisis Group, analyses the fragile political and economic situation following the devastating war with Ethiopia (1998-2000). Just a decade ago, Eritrea might reasonably have been described as challenged but stable. Today it is under severe stress, if not yet in full-blown crisis. While not likely to undergo dramatic upheaval in the near future, it is weakening steadily. Its economy is in free fall, poverty is rife, and the authoritarian political system is haemorrhaging its legitimacy.

“As Eritrea continues on this trajectory, its current economic and political problems are only going to deepen”, says Andrew Stroehlein, Crisis Group’s Director of Communications. “While there is no open protest at the moment, the government cannot take this for granted over the long term. Change is really only a matter of time”.

The militarism and authoritarianism which now define Eritrea’s political culture have their roots in the region’s violent history. The 30-year war for independence – achieved in 1991 – was part of a network of conflicts which devastated north-east Africa. The real significance of that legacy has only become clear in the last decade, as President Isaias Afwerki and a small cohort of ex-fighters have strengthened their grip on power, while suppressing social freedoms in favour of an agenda centred on an obedient national unity and the notion that Eritrea is surrounded by enemies.

Eritrea has fought in recent years, directly or indirectly, with Ethiopia, Yemen, Djibouti and Sudan and involved itself in various ways in the conflicts in eastern Sudan, Darfur and Somalia. Relations with Ethiopia in particular remain extremely tense, in large part because Ethiopia has failed to abide by its Algiers Peace Agreement commitment to accept binding arbitration on their disputed border. (The boundary commission ruled that the town of Badme – the original flashpoint of the war – was in Eritrea.) The UN Security Council’s failure to compel compliance reinforced the sense in Asmara that the international community is inherently hostile. While Eritrea asserts that it is pursuing legitimate national security interests, its aggressive approach and abrasive tone have left it increasingly isolated.

The army has been the key stabilising force, but it is becoming less stable, riddled with corruption and increasingly weak. National service – originally intended to build the country – could well prove one of the catalysts for the regime’s eventual collapse. Some form of demobilisation is required but cannot happen overnight, as society and the economy are incapable of immediately absorbing tens of thousand former soldiers. A holistic approach is urgently needed and requires outside help. Instead of pushing the regime into a corner, the international community should engage with Eritrea on the basis of a greater understanding about the country’s past and current grievances. This might well remove one of the regime’s key rationales and ultimately empower more reform-minded and outward-looking elements within the ruling People’s Front for Democracy and Justice (PFDJ) and wider society.

“It is inadequate and unhelpful simply to portray Eritrea as the regional spoiler”, says Ernst Jan Hogendoorn, Crisis Group’s acting Africa Program Director. “It is also the product of the political environment of the Horn as a whole. Ultimately, everything is interconnected, and a more comprehensive, integrated approach is needed by the international community to treat the severe problems confronting Eritrea and the region”.