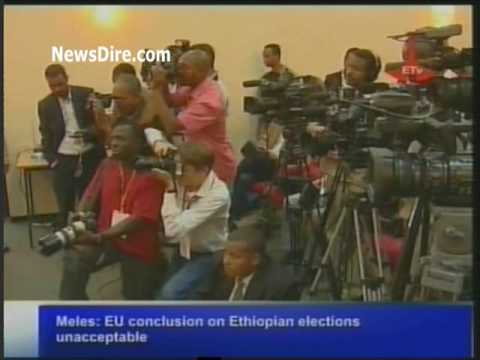 The European Union gave its report on Monday after delaying over 7 months. This slow movement to publish the report is seen as to lull the dictator Melese Zenawie regime and to have all the elements to its side as the proverbs says «One who laughs last laughs the best”. In the end it fire back on the reporter, Mr. Thijs Berman, a member of the European Parliament and head of Ethiopian election observer mission from Belgium.  He recently complained that his team was denied a visa by ‘unhappy’ Ethiopian authorities. The mission was supposed to officially submit its report to Ethiopian Government in Addis Ababa. However, Addis authorities are furious about the report which they have infiltrated to know the content were prouder to humiliate him by denying visa to Ethiopia where he was supposed to declare the report.

Melese Zenawie the outrageous dictator of Ethiopia who controls all power in country and heads the   Ethiopian People’s Revolutionary Democratic Front (EPRDF), rugged and won 99.6 per cent in May this year election. He thought he got the European Union observer Mr. Berman under his rug. The final report he succeeded to drag it over 7 months in contradiction to 5 years earlier election EU Reporter Mrs. Ana Gonzales in 2005 did not fall under the charm of Zenawie.    Mr. Thijs Berman did not hit the Iron when it is hot as his collage Gonzales. You never make complicity with a murderous dictator like Zenawie. The Reporter would have made his report like everybody else 7 month ago. Any way late is better than never.

The long waited compromised report of the EU declared that the Ethiopia’s national elections in May were flawed. It says the electoral process was short of international standards concerning transparency, and that state resources were used in the ruling party’s campaign. The late report further affirmed that Opposition candidates also feared the consequences of their political activities. It is the Human Rights Watch on Monday who gave the courage to  Mr. Thijs Berman  that  the long held report to come out  and  declare that  the    Ethiopia has systematically clamped down on its citizens’ right to cast ballots freely, and the government’s overwhelming victory shows how little Ethiopia allows dissent.

The whole world has seen  the electoral  game  that  the Ethiopian  electoral  field was  balanced in favor of Prime Minister Meles Zenawi and allied parties won all but two of the 547 seats in parliament,  but this out right truth   took Mr. Berman to declare over  7 months.

Mr. Berman after reading the Human right watch report recognized that the local administrations that are almost entirely controlled by the Ethiopian Peoples’ Revolutionary Democratic Front should in future have a reduced role in elections to make the process fairer if Melese did not control more than 99 percent of local administrations in the country.

Mr. Berman presented his report in Brussels after observers failed to get permission to deliver the report in Addis Ababa, said Thijs Berman, a Dutch member of the European Parliament who led a team to the Horn of Africa country in May. He declared that he had “no idea” why the report wasn’t presented in Ethiopia.

The Ethiopian ruling Party EPRDF used a combination of harassment and arrests and withholding food aid and jobs to thwart the oppositions ahead of the election, Human Rights Watch, a New York- based advocacy group, said in a March 24 report entitled “One Hundred Ways of Putting Pressure.”

The EU reporter saw in front of their eyes that the dictatorial regime’s   ruling party alliance won all but four of the 1,904 seats for the regional state councils in this year’s elections.

The late report was late to recognize  that  the  “Changes to the legal framework and the fragmentation, imprisonment and exile of opposition figures following disputed elections in 2005 have made it difficult for opponents of the ruling party to operate  freely in Ethiopia.”

The EU reporter which did not hit the Iron when it was  hot prefer to harness it seven month later,   declared that “the EPRDF used state resources to fund its campaign and reporting by state media ahead of the vote was biased in favor the ruling party. Freedom of assembly was sometimes not respected for opposition parties, and the volume of complaints of intimidation against the ruling party, local administrations and police was a matter of concern.”