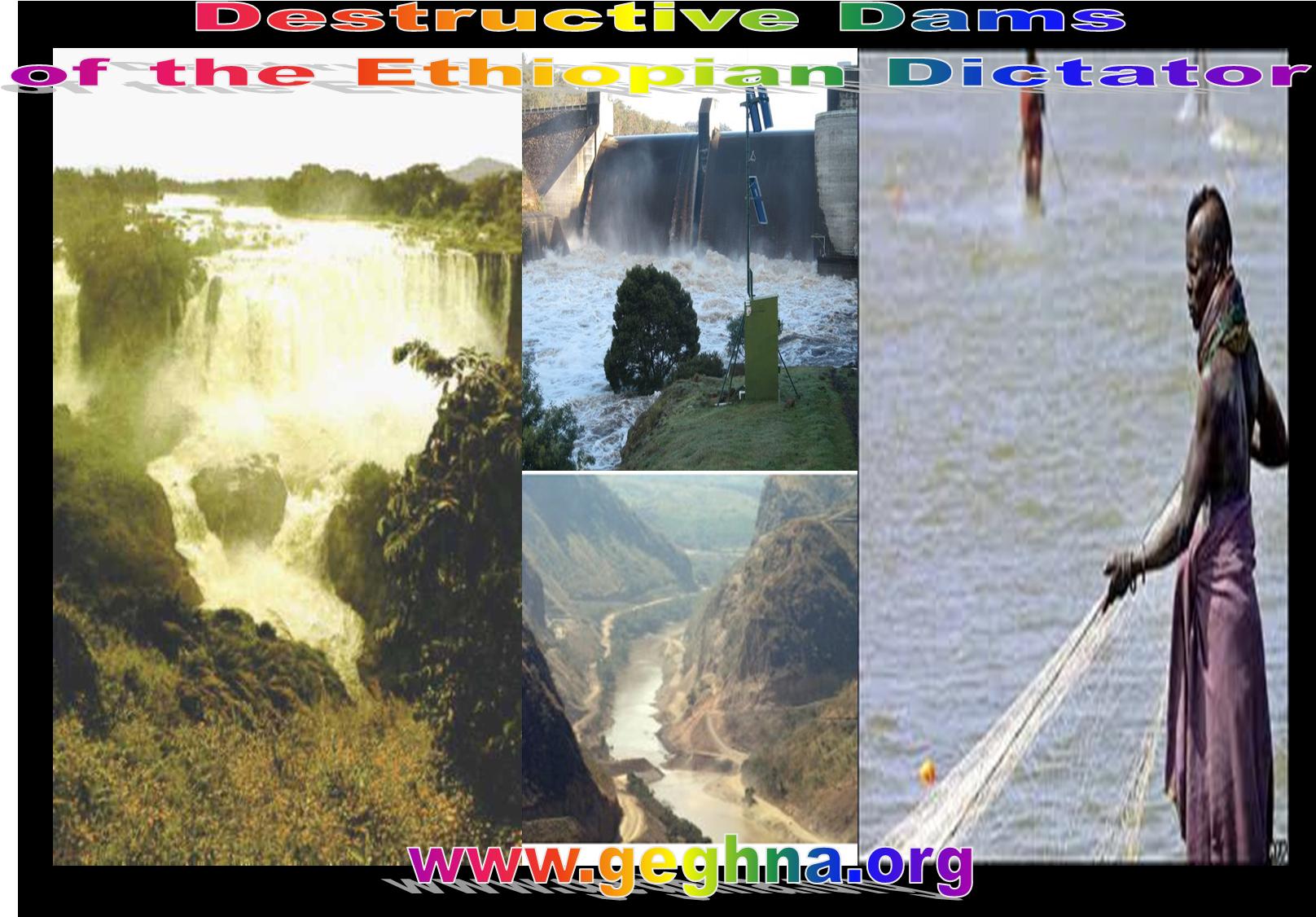 The  genocidal Dictator Melese Zenawie started his construction of the long waited  Megalomaniac dams at the expense of  Ethiopian inhabitants and its environment with  the rest of the riparian states. Especially Egypt,  a country in  full uprising  since the 25th of January 2011 against the three decade Ethiopian type  dictator and almost   60 years military rule. The Ethiopian dictator benefiting Egyptians internal crisis is rushing  to build his destructive dams. These dams are mainly for the land grabbers and enrichment of the dictator and his equip. The local and regional population needs a human level construction to secure the continual flow of  waters,  the save guard of their human and natural  environment.

The New Massive Dam is being constructed by the Ethiopian Electric Power Corporation in Benishangul state, very close to the Sudanese border. Sudan and Egypt the traditional stake  holders are  immediately concerned as water of  the Nile waters dwindling  by megalomaniac dams.  These  countries are today caught in the internal convolutions. Sudan is taken by internal division and secession while Egypt is consumed by revolution.

The megalomaniac destructive dam on the Blue Nile construction has been awarded to the same Italian construction company that built the Gilgel Gibe II and Tana Beles dams Salini Costruttori SPA.  The Ethiopian dictator has been criticized   awarding the projects without a competitive national tender, in violation of its own procurement guidelines.  The company has already begun deploying heavy construction machinery to the site to start the project. The so called  “project x”  power plant will have an electric generation capacity of 6,000MW, which has any utility for the  imitate use local population except the multinational foreign land grabbers, and to increase the dictators financial  resources to maintain power in Ethiopia at the expense  environmental destruction and provocation of  water shortage in riparian countries.  The Dictatorial regime have forcedly displaced the local population of the region in order not have resistance and immediate revolt th hand to build these deadly dams.

The dam is expected to take at least five years to be completed,  in the these period of time  the Ethiopian  dictator   will surely  not be there to celibate the end of the project.

The genocidal dictator  has already three other power plants, which have been under construction in the past few years waiting to be finished  before the fall of the regime following the northern Africa uprising  which will soon swipe Ethiopia.

Ethiopian dictator dreams to become an African powerhouse due to its high hydropower potential. However,   the highland is situated on volatile volcanic moving tectonic plates. Building a dam in the highland plateau will endanger the lives of millions in down river countries with a disastrous effect to its local inhabitants.

The dictator  2009 declare that the less than 10 percent of Ethiopians had access to electricity and the country is  plagued by power outages. The genocidal dictator used the pretext of the countries power shortage kindled by his own blackouts to get support for his megalomaniac schemes. Ethiopia is a  country which is not  embarked  industrialization does not need such amount of electric power.  Over 85 % the population is traditional farmers struggling   to survive. They can develop alternative and environment friendly project with less than the quarter of the money spend in these projects. The irredentist dictator is using the pretext  of  water  power  and famine  for its own end to control the impoverished Ethiopians.

The successful completion of this dams  is hoped to support the project of land grabbers in  areas where the population is  displaced areas to produce   to 8,000 MW from the current rate of 2000 MW. Ethiopian dictator is planning to control the livelihood of  countries of the region by his massive killer  dams.

According to the dictator  the benefits of the dams are not limited to hydro power, many dams are multi-purpose dams that are also designed to provide water for irrigation and flood control. The dictator is building all Ethiopia’s power plants in the two main rivers of the Horn of Africa the Nile and the Omo River basin the home of many traditional societies, where their entire livelihood depends on them. Furthermore, both rivers are shared with Ethiopia’s neighbors and for none of them an international water sharing agreement exists were not signed in pre or post colonial, except the Nile.  However, Ethiopian dictatorial regime  is not a constructive participant in the Nile Basin Initiative.  It wen even far by  declaring  recently war against Egypt  just before 25 January revolt in Cairo.

The dictator is warned by the environmentalist that  hydropower impoundment  reduces water  flow for a prolonged period if not permanently, since Ethiopia is located in highland volcanic crater with  hundreds  of underground  volcanic tunnels  where  water infiltration is evident.   In Ethiopia   evaporation from the reservoir surfaces constitutes a permanent loss of water from the river though it is less than downstream in Egypt and Sudan.  The worst is the irrigation which consumes water in quantities for newly grabbed commercial farms. Thus making it unavailable for  downstream population in Egypt, Kenya and Sudan.

The Ethiopia  has no agreement with Egypt or Sudan about the sharing of the Nile’s water, but has an international  and local responsibilities not to abuse water resources for multinational companies that their only objective is to increase their  benefit from their investment in the Land Grapping . Egypt says that its historic water rights would be violated by dams in Ethiopia and that its water security would be affected one way another by such dams in pre revolutionary period. The dictator’s response is ready to go to war than negotiate. Egypt and Sudan concluded a water sharing treaty in 1959. The agreement does not consider the water rights of other Nile riparian states and has never been recognized by Ethiopia.  The dams will reduce the flow of water to Sudan and Egypt permanently. And will stop the traditional flooding for Egyptian traditional farmers in the Nile. And will destroy the Omotic population in Southern Ethiopia. In Kenya the Lake Turkana will cease to exist by creating unnecessary drought which we have started  to show its effect recently  in northern Kenya.

In one of  recent  studies, assuming an evaporation rate of one meter per year, an irrigated area of 200,000 hectares and a combined reservoir area of 1,000 square kilometers, the flow of the Nile could be reduced by three billion cubic meters per year, equivalent to about 5 percent of the current allocation of Egypt under the 1959 agreement. But Ethiopia has sold and selling  millions of hectares to the land grabber which will reduce the water which crosses the high land plateau to zero.

The Omo River flowing to  Kenya has been expressed concerns about downstream impacts on Lake Turkana eventually even drying due to direct impact of the upstream  dams.  The most prominent environmental organizations like Friends of Lake Turkana and International Rivers challenged the project in terms of its ecological destruction. The Doctor Richard Leaky    the known paleoanthropologist have taken a strong stand against the damming the river OMO by demonstrating its negative effects in the totality of the regional ecosystem.