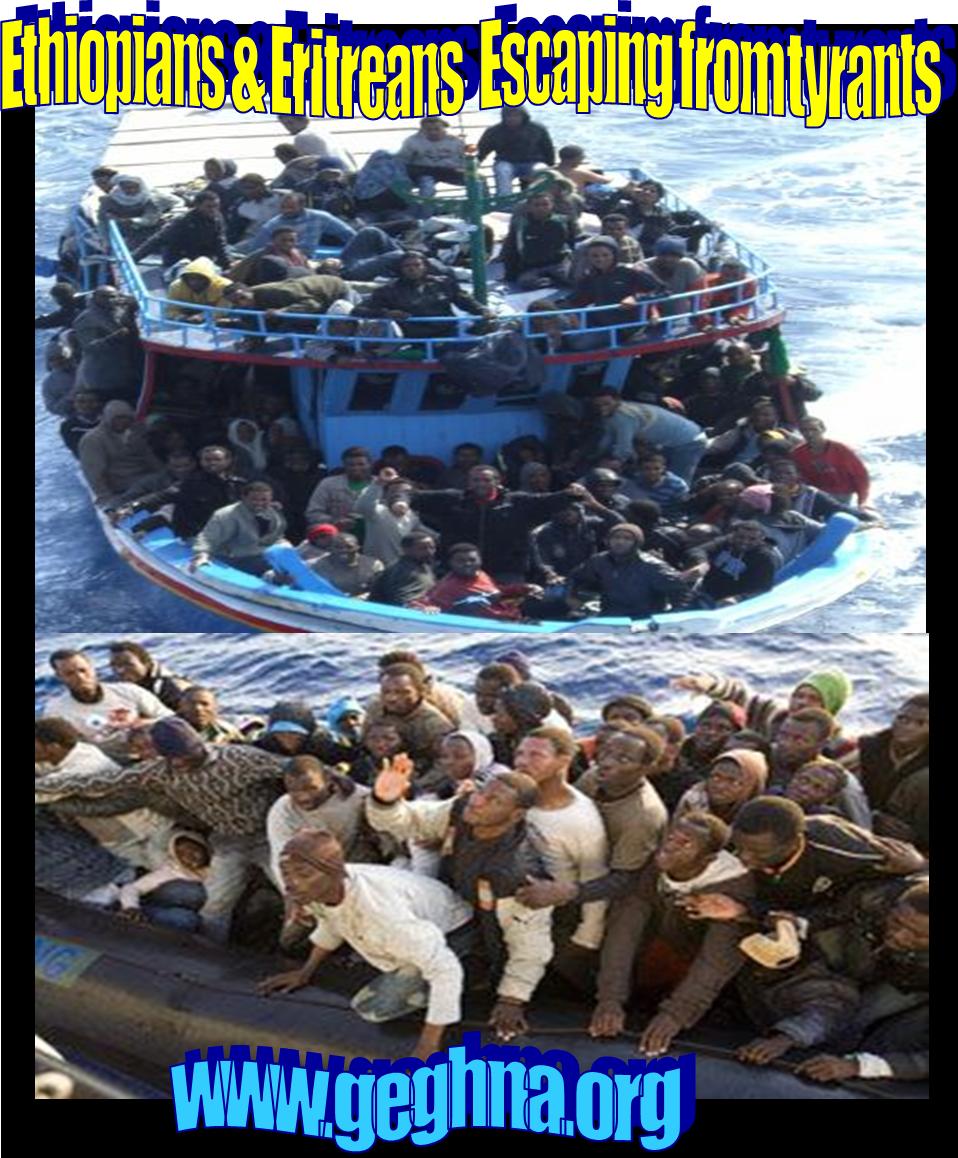 Africans escaping from dictatorial regimes found themselves between the hammer and the hard thing. Those   trying to save their lives from one found themselves stranded in the conflict of the other.  Many   are drowning in the coast of Libya, while others have been sold as slaves in Sinai trying to cross to the Promised Land. Those who stayed behind in the camps of Gadaffi are stigmatized and marked as his mercenary by local population.  Many Ethiopian and Eritreans have been victims of rape and body trafficking. Recently an Ethiopian baby is delivered on a boat from a rapped mother. Gaddafie has a great responsibly in financing and arming most the African tyrants to power.  When it comes to the new mother, the Libyan dictator   has a direct responsibility in her rape   in Libya and for his support tyrant regimes   in Eastern Africa.

On the 26 of March 2011, the first of wrecked boat able to reach the coast escaping form the North African uprising carrying over 350 East Africans refugees from Libya.  One of the rapped women who were evacuated from the boat to a hospital on the island of Lampedusa lost her baby.   The Earlier young lady who was airlifted from the tiny island to a hospital in Sicily a named her child «Yeabsera” (” Glad tiding of God”) on the memory of her hardship and that God saved her from perishing in the seas.

According to Laura Boldrini a spokeswoman of the UNHCR in Italy confirmed that the African groups need international protection. “Until now the only migrants to arrive in Lampedusa were Tunisians, and this is the first boat coming from Libya with people fleeing the military escalation, the vendettas and the retaliation attacks.”

T Italy and Libya signed a friendship treaty in 2008 which Italian authorities say led to a 94-percent decrease in illegal immigration.   These days Gaddafi himself has threatened to send “millions” of migrants to Europe as a soft weapon of war against NETO groups.  The last group that arrived   in the wrecked boat on Saturday is mostly Eritreans, Ethiopians and Somalian. Over 15,000 mostly Tunisian migrants have landed on Lampedusa in rickety fishing boats since the ouster of Tunisian Dictator Ben Ali, and more are expected every day.  According AFP, “more than 1,000 migrants arrived on the island on Saturday including 69 who were rescued from a sinking boat by a fishing trawler.” There were chaotic scenes when three boats carrying some 600 migrants arrived in the port. The Italian security forces have been seen to prevent a crowd of migrants already on the island from surging towards them. Recently the Italian government has suspended the treaty and warns that hundreds of thousands of migrants could depart for Italy if Gaddafi’s regime falls.

Italy has requested increased assistance from the European Union. The boat was assisted on Friday by a Canadian warship taking part in a mission by the NATO alliance to enforce a naval arms embargo on Libya. Coastguards said the boat would not be taken to Lampedusa but to the nearby island of Linosa and the passengers would then be taken to a refugee centre. David Taylor, a spokesman for the NATO embargo mission based in Naples, said: “We are monitoring the situation very closely and confidently.” It is reported that that the boat arriving in Italy had left Tripoli in the night between Thursday and Friday. The refuges informed the local UNHCR officer that four or five other boats carrying African migrants had also left Libyan shores carrying around 1,000 people. The charity Save the Children said around 250 Tunisian children is still on the island, which is closer to North Africa than to mainland Italy.

More than 250 other children — most of them teenagers — have been taken to special care homes in other parts of Italy in recent weeks. Ninety-six of the children were transferred to an abandoned US Coast Guard base on Lampedusa on Saturday after Save the Children said the conditions in which they had been living on the island were unacceptable. The island is struggling to cope with all the recent arrivals and hundreds of migrants have been sleeping out in the open because of a lack of space. “We believe it is necessary for transit centers to be set up for children to ensure acceptable living conditions while they wait to be installed in communities,” Rafaela Milano of Save the Children said in a statement. The European assistance in the elimination of African dictators will surely stop the inflow of refuges to their mainland. Gaddafie was highly implicated in the Horn of Africa conflict that cost millions of life, not forgetting scores of conflicts he financed throughout the continent that assured many tyrants to stick on power.