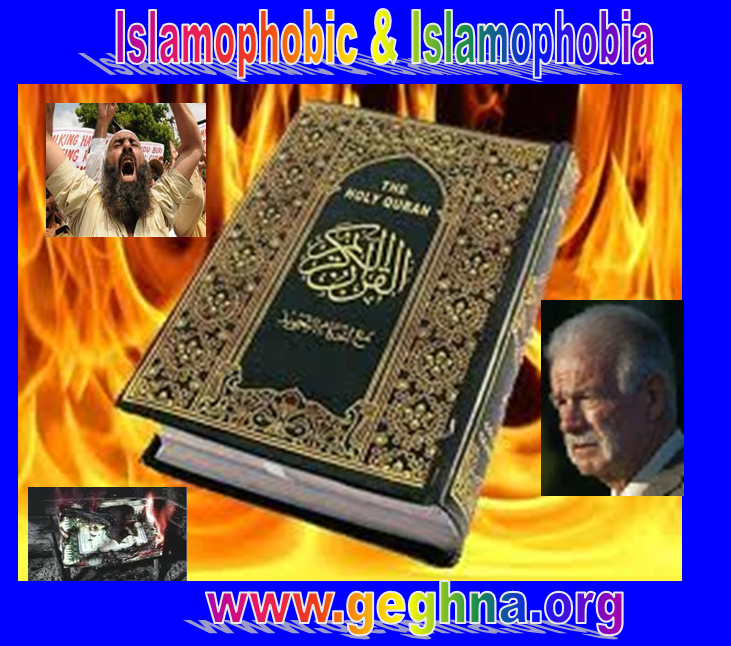 America, Land of the Brave, Home the Free.     America is a place of extremities and sphere of Paradox to all.  America offers Hope and Disappear, Slavery and Freedom, Revolution and Change and the melting pot of nations. The country  of Terry Jones, “A Quran Judge” where  shamefully burned the Holy Book of Islam, not far from his eventual future residence for abnormal men- South Florida State Mental Hospital. He is out of his mind!  He found his sense for a few month and halted his crazy plans to burn a Quran on the 9/11 anniversary last year. He finally lost his nerve and oversaw the burning of the Islamic holy book on Sunday after he so called found it «guilty” during a mock «trial” at his  so called “church” rather  a plate form of extremism and intolerance. Today is the Quran tomorrow what…  who?

Terry  forgot one thing important  to all of us that  whatever  happens  in America,  good or bad affects the whole planet – like 9/11 or  a preacher of hope like   the Great speech of  Dr. Martin Luther King Jr. ” I have  A Dream”…  But Terry Jones is a preacher of night mare and destruction.   It is hard to generalize America from Terry Jones or Dr. King one has to comprehend how the dream of the founding father took the spirit of others even across the Atlantic reaching   to our time. “We had a court process,” said “Pastor” Terry Jones, “We tried to set it up as fair as possible, which you can imagine, of course, is very difficult.”Jones said about 30 people attended the mock trial at his Dove World Outreach Center in Gainesville. Jones considered the “International Judge the Quran Day” to be a fairer way of addressing the Islamic holy book, and denied breaking earlier promises not to burn a Quran. If the jury had reached a different conclusion, Jones said he would have issued an apology for his accusations that the Quran promotes violence.”We still don’t feel that we broke our word — that was in relationship to International Burn a Quran Day,” he said, referring to his previous plan to burn a pile of Qurans on the 9/11 anniversary to protest plans for an Islamic community center near Ground Zero. “We would not establish another International Burn a Quran Day.”

After a six-hour crazy  trial on Sunday that featured a Christian convert from Islam as a prosecuting attorney and a Dallas imam as a defense lawyer, a jury of 12 church members and volunteers made the judgment , Jones said.

He said the punishment — burning the book after it had been soaked in kerosene for an hour He said “several hundred” were polled and voted for burning over shredding, drowning and facing a firing squad.

Jones considered the burning — which was conducted by another pastor since Jones was serving as the judge — a one-time event.

“That is not our intention, to run around America burning Qurans,” he said.

Jones has launched a new organization, Stand up America, and plans to protest the Quran, Sharia law and “radical Islam,” and has scheduled an April event in front of an Islamic center in Dearborn, Mich.

Such an act will not help intera religion relation globally and will drag the already weaken American image to ashes in Islamic world.

Today non western Muslims are blaming and manifesting against  the US for letting such insane person play with their Holy Book as seen in Afghanistan, a country where many American and collation lives are put in arms way in daily basis.  Furthermore, the Western Muslims has been engaged in double sociological    dilemma since 9/11 in general.  Firstly they are confronting a new expanding era of Islamophobia.  Secondly they are fighting their Islamic conscious in daily basis, due to the more and more    constraint of their spiritual and cultural life to their personal residences or legal worship centers and Mosques.