Deprecated: Return type of Requests_Utility_CaseInsensitiveDictionary::getIterator() should either be compatible with IteratorAggregate::getIterator(): Traversable, or the #[\ReturnTypeWillChange] attribute should be used to temporarily suppress the notice in /home/geghna/ethiopianism.net/wp-includes/Requests/Utility/CaseInsensitiveDictionary.php on line 91
 SPLM’s Departure will affect the 2011 Referendum in Sudan – Ethiopianism
Skip to content
SPLM's Departure

SPLM’s Departure will affect the 2011 Referendum in Sudan 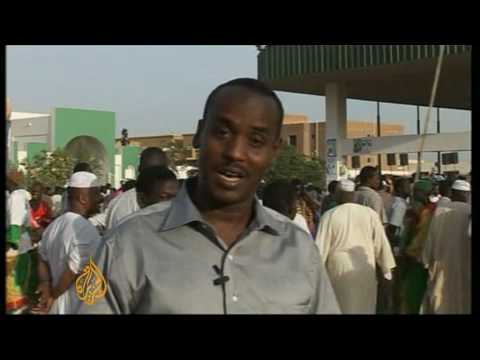 Sudan Election Problems Spark US Fears of Unraveling Peace Deals
Voice of America
Growing problems with Sudan’s upcoming election are sparking fears of more instability in the volatile and fragmented country. The US government has been …

Stories of slavery in Sudan

Sudan advocacy groups target congressional staffers on Facebook
Foreign Policy
If so, prepare to see a new Sudan advocacy ad on Facebook directed at you! A coalition of Sudan-related organizations is launching a new ad campaign today …

Garner resident writes book about his experience as a Sudanese refugee

NAIROBI, Kenya — The sudden withdrawal on Wednesday night of the leading challenger in Sudan’s imminent presidential election has cast a cloud of uncertainty over the vote and almost instantly raised the prospects for violence.

Yasser Arman, an opposition candidate for the southern Sudan People’s Liberation Movement, during a news conference with other presidential candidates in Khartoum on Monday.

Yasir Arman, who was the candidate of the Sudan People’s Liberation Movement, the leading opposition group, announced on Wednesday that he was dropping out because, he said, it was “impossible” to hold an election in Darfur and that overall the whole process was “rigged.”

However, he said that his party, which fought a long and bloody war against Sudan’s government, would participate in the parliamentary and local elections across the country, except for the conflict-wracked Darfur region. This partial boycott of the election, which is scheduled to begin April 11 and has been billed as the first meaningful vote in Sudan for more than 20 years, has left observers perplexed about what will happen next. “

This one still not very clear,” one American official wrote in an e-mail Wednesday night. However, the official, who was not authorized to be quoted, said, “The message from Washington and others is ensure the elections are free and fair and deal with the electoral obstacles but move forward with the elections.”

Several human rights groups have complained that the election is shaping up into a sham because Sudan’s ruling party has intimidated and tortured opponents; skewed the census in the ruling party’s favor; manipulated the media to essentially neuter any viable opposition; and used state money to bribe local chiefs.

Because of these rising concerns, some Western election observers recently advised the Sudanese government to postpone the vote. That prompted Sudan’s president, Omar Hassan al-Bashir, who has been indicted on crimes against humanity for the bloodshed in Darfur, to threaten to cut off the election observers’ fingers.

Sudan is a tightly controlled police state and few believed these elections would be a shinning example of democracy. But the real risk to the country’s stability — and the stability of the wider East Africa region — is a planned referendum for early next year in which southern Sudanese will vote on whether to split off and form their own country. If that referendum is tampered with, many analysts say, it could be a recipe for a major war.

Despite all the media attention in recent years on the conflict in Darfur, which has claimed perhaps 300,000 lives, Darfur was a side show compared to Sudan’s north-south war that raged on and off for decades and killed more than 2 million people.

Sudan is an extremely large and diverse country, and there has long been an explosive fault line between the Muslim north and the south, which is dominated by animist and Christian peoples. It was the American-backed peace treaty in 2005 that ended the north-south war which set in motion the upcoming elections and the southern independence referendum.

Such talk is clearly dangerous, because both sides have been rapidly rearming themselves in preparation for another possible war. Recently, thousands of southerners have been killed in ethnic clashes which many Sudan analysts believe are fueled by the north.

On Wednesday, Pagan Amum, the Sudan People’s Liberation Movement’s secretary general, told The Associated Press that President Bashir’s threats are “unacceptable.” “Self-determination was not a gift,” Mr. Amum said. “The southern Sudanese people have the capacity to defend themselves and their referendum.”

The ruling party of South Sudan says southerners are “ready” for April elections and that it is not supporting calls from northern opposition parties for the vote to be postponed.

“We are not only concerned about delays of election that might affect the [independence] referendum, but we feel like this is the time for elections, and our people are ready, and we do not want our people to be disappointed. SPLM has never requested for elections to be delayed,” Itto said.

Following a meeting Saturday between an opposition alliance composed of northern parties and SPLM, reports circulated that SPLM had joined the northern opposition in calling for Sudan’s April vote to be postponed until November.

South Sudan leader Salva Kiir will be meeting Tuesday with Sudanese President Omar Hassan al-Bashir to discuss concerns about the fairness of the upcoming vote.

Itto said points of concern raised by the opposition forces are “genuine,” but that resolving them does not necessarily require pushing back the polls.

The Northern opposition parties allege elections will not be free and fair under the current environment.

The parties are calling for the reform of a number of state security and media laws, and for the resolution of the Darfur conflict and a finalized border demarcation between the North and South as prerequisites to national elections.

Itto said Mr. Kiir will discuss with Mr. Bashir concerns over the fairness of ballots printed in Khartoum, the abilities of international observers to freely monitor the vote, and feared presidential powers to declare a state of emergency.

The upcoming elections were agreed to as part of a 2005 peace deal between Bashir’s Khartoum government and the SPLM, when the party was still an active rebel movement. Any delay in postponing the elections would likely require the tacit approval of both peace partners, but both Mr. Bashir and the SPLM have now brushed back calls to postpone the vote.

South Sudan is to hold an independence referendum in January 2011.  At a recent regional summit in Nairobi, Mr. Kiir said the upcoming elections are not a requirement for the referendum.  But Itto acknowledged that SPLM remains concerned that any further delay in the elections – originally slated for last year – will threaten the date of the South’s prized secession vote.