Sudan Beshir’s red herring Electoral game as a pretext “to cleanse from genocide”, a fouling will lead to a breaking apart of Sudan

Sudan votes, and stands on the brink of splitting in two

Britain can take general elections for granted, but millions of voters queuing in Sudan last week carried historic significance: it was the country’s first multi-party poll in almost a quarter of a century. The five-day ballot was part of a peace deal that ended 20 years of war between the majority Muslim north and mainly Christian and animist south that left more than 1.5 million dead.

But the process was marred by allegations of vote-rigging and a boycott by many opposition parties. Another key condition of the peace agreement means this could also be the last election of its kind. Africa’s biggest country is poised to split into two. In January the south is due to hold a referendum on independence. If, as widely expected, it votes yes, it will create the continent’s first new nation since Eritrea declared independence from Ethiopia in 1993.

“It is highly likely that the south will choose independence,” Scott Gration, the US special envoy to Sudan, said last month. “I don’t see that the north has to re-invade the south and start the war again. If we can resolve these issues, I think there is a fairly good chance that… the south can have a civil divorce, not a civil war.”

But diplomats fear that secession could encourage similar movements in Nigeria, the Democratic Republic of Congo and elsewhere, leading to a Yugoslavia-style fragmentation. Libya’s Muammar Gaddafi recently caused a diplomatic spat by arguing that Nigeria should divide into a Muslim north and Christian south. He then modified the proposal, suggesting several states along ethnic lines.

But there are important practical considerations. Last week, Time noted that Juba, set to become the world’s newest capital city of the world’s newest country, has no landline telephones, no public transport, no power grid, no industry, no agriculture and few buildings; some government ministries are built from prefab cabins and shipping containers. The magazine added: “How can southern Sudan become an independent nation when it possesses so little of what defines one? Many aid workers and development experts in Juba doubt it can. They have coined a new term to describe its unique status: pre-failed state.”

Then there are the questions of a flag, a national anthem and a name. Novelist Philip Hensher mused on the last of these in the Independentlast year: “Naming it after an ancient tribe or modern ethnic group won’t work. The Dinka are the largest group, but it is a considerable melting pot… And though we live or have lived with two Yemens, two Koreas, two Germanys and now two Congos, two Sudans wouldn’t seem an ideal situation. No, I think it has to be called after its predominant feature, and the greatest of rivers… the Republic of the White Nile has a fine ring to it.” 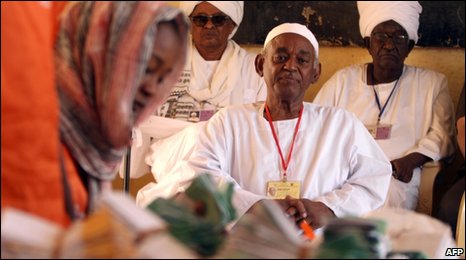 Representatives from the different parties are observing the count.

Mr Carter acknowledged there were problems with voting, but said he could not be sure whether they had given any particular candidate an advantage.

He said the fact that a significant part of the opposition had announced a boycott would not affect the legitimacy of the poll. “As you know, almost all the candidates remained in the race until the end of the campaigning period was over,” he told the BBC’s World Today program.

This meant the ballot papers had been printed with all the candidates’ names on them.

“The National Election Commission unanimously told us that if any candidate gets a vote, whether that party has withdrawn or not, the candidate’s vote will be counted.

“And if any of the candidates get a majority of the vote they will be declared to have won the election and they can hold office if they wish.”

Mr Bashir, who is wanted by the UN for war crimes in Darfur, where a low level conflict continues, has asked rival parties to join his government if he wins.

Just as he is certain to win the presidential vote, the southern former rebels – the Sudan People’s Liberation Movement (SPLM) – are likely to dominate the polls in the south.

The country’s ruling party said on Thursday that soldiers from the semi-autonomous south had killed at least five of its supporters in the first reported incident of deadly violence during polling.

In Darfur, though, the authorities were keen to highlight there was no major security incident during the elections.

However areas controlled by rebels did not vote, and hundreds of thousands of internally displaced people did not register

The National Elections Commission (NEC) has started counting votes since the polls officially closed on Thursday in Sudan’s first multi-party elections since 1986. However, this election has been marred by opposition boycott and technical issues that have undermined its credibility in the eyes of the observers.

In the presidential race, the NCP leader and incumbent president Omer Hassan Al-Bashir maintained a comfortable lead over his rivals scoring no less than 85% in the districts announced so far by NEC including foreign posts with Sudanese expatriates voting abroad.

But the race was expected to be an easy one for Bashir after his main challengers, the Sudan People Liberation Movement (SPLM) candidate Yasir Arman and the ex-PM Al-Sadiq Al-Mahdi who is the Umma party chief withdrew from the race.

By contrast, the legislative and gubernatorial elections in the North were expected to witness a stiff competition between parties some of which are relying on a religious followers base such as the Unionist Party (DUP) whose leader Mohamed Osman Al-Mirghani is also the head of the Al-Khatmiya religious sect.

DUP and few other parties that did not boycott the elections revealed unfavorable preliminary results as reported to them by their monitors.

“Everything is totally corrupt. We are fed up and we will never recognize these elections,” the DUP’s Salah al-Basha told Reuters.

Prior to the vote, he said the party was sure to win the governorships of at least six states. Friday he said it looked to have won none.

This week the NCP senior figure Ghazi Salah Al-Deen Al-Attabani has offered all opposition parties to join the new government even if they boycotted the elections saying the country needs consensus ahead of the 2011 referendum in South Sudan.

However Bashir dismissed his aide’s remarks saying the post-election government will consist primarily of those parties that did not boycott.

The Sudanese president in an interview with the independent Al-Akhbar newspaper questioned the wisdom of elections and competition if all parties were going to be part of the national government without regard to the outcome produced by the election.

He said that it is best for the country to have a strong government that enjoys a degree of coherence and harmony that reflects parliamentary and also to have a strong and responsible opposition exercising its oversight role on government performance.