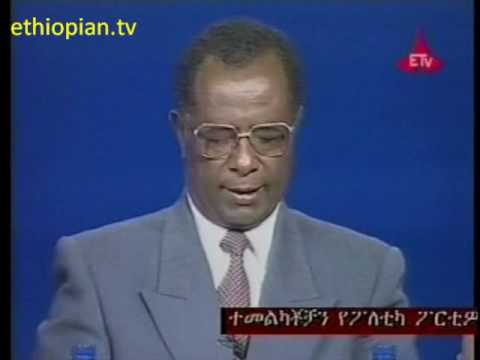 Election 2010 : UDJ is alarmed and concerned about the medical state of its party leader Birtukan Mideksa
She’s no different than other prisoners, no special considerations: Gov’t

Unity for Democracy and Justice (UDJ) said that it is alarmed and concerned about the medical state of its party leader Birtukan Mideksa who is in prison. It called for the examination of Birtukan by an independent medical team.
In a statement released yesterday, UDJ said that it was seriously concerned about the health of its leader after learning of her continuing decline from her mother, who is the only person allowed to visit her inside prison aside from her daughter.
UDJ said that the government was transgressing Article 21 of the constitution by refusing Birtukan visitation right from her private doctor, relatives and spiritual counselor in a manner that is unheard of before.

In its statement, UDJ said Birtukan’s health is deteriorating and asked the government to allow an independent medical team to examine her in the presence of the Red Cross and the result be made public.

Andualem Arage, Secretary-General of UDJ, said in a phone interview that Monday marked 15 month since Birtukan was imprisoned again and called on the public, its members and supporters to commemorate the day by going on a hunger strike and holding prayers.

Asked for comments on the statement of UDJ, Shimelis Kemal, Deputy Head of Government Communications Office, said that the government was aware that numerous people have been using the issue of Birtukan as a political agenda. He pointed out that if Birtukan is ailing, she can get treated at the prison’s infirmary and said he was surprised that people were saying that she is in an alarming state knowing that. He added that if she has health concerns that cannot be handled in the infirmary, then she will be referred to other hospitals like every other prisoner.
“Birtukan is entitled to the same rights and treatments as any other prisoner and shouldn’t expect different,” he said. He added that attempts to obstruct any prisoner from serving their sentence are punishable by law.

Birtukan was imprisoned again a little over a year ago on the grounds that she claimed she did not didnot ask for the pardon that was granted to her. Shimelis said that she is just a convict and not a prisoner of conscious as many people make her out to be and any allegation to that effect is baseless and unacceptable.
2@3@4@5@6@7@8@9@

According to opposition parties in Ethiopia, nearly 450 of their members have been jailed, as part of an effort by the ruling Ethiopian People’s Revolutionary Democratic Front (EPRDF) to secure national elections being held this May. One opposition party reports that seven of its members have been murdered for political reasons during the course of this past year. The allegations fit Ethiopia’s history of violent repression, including arrests and harassment of dissenting students and teachers.

During Ethiopia’s last elections, held in 2005, widespread protests led to violent clashes with police, with about 200 protestors killed and many opposition leaders jailed. The ruling party, led by Prime Minister Meles Zenawi, said that the crack-down was simply to maintain law and order, and to stave off widespread ethnic conflict. Members of the opposition said it was a means of denying opposition parties electoral success.

The ruling party’s bid for electoral dominance has certainly been effective — during last year’s local and bi-elections, the EPRDF and affiliated individuals lost only three seats, out of nearly 3.6 million contested seats. This past January, the government took another step towards consolidating its power by essentially outlawing human rights work and curtailing freedom of association. And according to a Reuters news analysis, the EPRDF’s dominance is bolstered by a general sense that the West “would be comfortable with Meles staying on – as long as he remains a loyal ally in the volatile Horn of Africa and liberalises his potentially huge economy.”

Even so, former Ethiopian Minister of Defense Seeye Abraha characterizes his country as a dormant volcano. A recent statement posted by the opposition party Ginbot 7 makes it abundantly clear that tensions remain high:

[One type of nation] is composed of countries that are ruled by corrupt tyrants whose governance is characterized by gross human rights abuse, economic polarization, ethnic conflict and political intolerance…almost all of these dictators have become turn coat democrats and hold sham elections to satisfy the demand of donor nations. The reality, however, is that they never respect election results, or care for democracy. A perfect example of one such government is the illegitimate regime of Meles Zenawi in Ethiopia that deviously preaches democracy, but has ruled the country with an iron fist