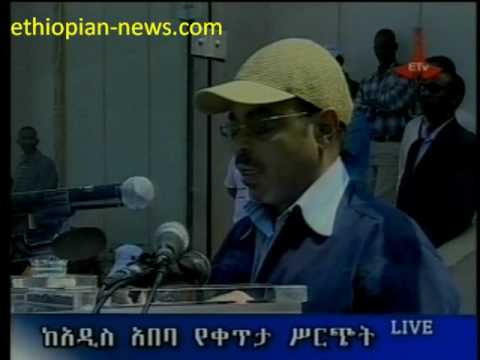 The European Union says it has concerns about Sunday’s election in Ethiopia, won by the ruling party in a landslide. Ethiopia’s elections board says the …

Ethiopians waited in line yesterday to cast their votes in Addis Ababa. The election in Africa’s third most populous nation is being closely watched by …

DDIS ABABA, May 25 (Xinhua) — The Ethiopian ruling party has gained 499 seats in the 547-member parliament, media reported on Tuesday.

The report quoted the Ethiopian National Electoral Board as saying the outcome emerged when 536 results were announced.

Earlier on Tuesday, the National Electoral Board has announced that the ruling party, the Ethiopian People’s Revolutionary Democratic Front (EPRDF), is leading the fourth national elections by winning 477 of the 547 federal parliamentary seats.

Public Relations Head with the Board, Mohammed Abdurahman, said in a statement on Tuesday that the EPRDF won 38 seats in Tigray, 137 in Amhara, 160 in Oromia and eight seats in Afar states, according to the provisional election results.

Hundreds of thousands of members and supporters of the EPRDF on Tuesday celebrated party’s victory after announcement of provisional election results by the National Electoral Board.

Meles Zenawi, Ethiopia’s current Prime Minister and Chairperson of EPRDF, accompanied by senior government officials, joined the huge crowd at Maskal Square, the grand one in Addis Ababa, capital of the nation.

In assessing the polls, international election observers should address the repressive legal and administrative measures that the Ethiopian ruling party used to restrict freedom of expression during the election campaign, Human Rights Watch said.

“Behind an orderly façade, the government pressured, intimidated and threatened Ethiopian voters,” said Rona Peligal, acting Africa director at Human Rights Watch. “Whatever the results, the most salient feature of this election was the months of repression preceding it.”

In the weeks leading up to the polls, Human Rights Watch documented new methods used by the ruling Ethiopian People’s Revolutionary Democratic Front (EPRDF) to intimidate voters in the capital, Addis Ababa, apparently because of government concerns of a low electoral turnout.

During April and May, officials and militia (known as tataqi in Amharic) from the local administration went house to house telling citizens to register to vote and to vote for the ruling party or face reprisals from local party officials such as bureaucratic harassment or even losing their homes or jobs.

The May poll was the first national parliamentary election in Ethiopia since the government violently suppressed post-election protests in 2005; almost 200 people, including several police officers, died after the 2005 poll and tens of thousands of people were arrested, including opposition leaders, journalists and civil society activists.

In a March 2010 report, “‘One Hundred Ways of Putting Pressure’: Violations of Freedom of Expression and Association in Ethiopia,” Human Rights Watch described the complex and multi-faceted way in which the government has sought since 2005 to silence dissent, restrict the media and independent civil society, and leverage government resources such as civil service jobs, loans, food assistance and educational opportunities to encourage citizens to join the ruling party or leave the opposition.

The government’s efforts to ensure the election outcome continued right up to polling day in Addis Ababa, according to Human Rights Watch’s research in different areas of the capital, including in Merkato, Piazza, Wollo Sefer, Meskel Flower, Aya Ulet, Kera, Gotera, Hayat, Kotebe-CMC and Bole neighborhoods.

“Intimidation to register and to vote for the ruling party is everywhere,” a resident of Addis Ababa told Human Rights Watch. “If the local administration is against you, they’ll be after you forever. They can come and round you up at will.”

A couple living in the Meskel Flower area said they were visited on a weekly basis by members of the neighborhood militia who were checking whether they were registered as EPRDF members. The wife told Human Rights Watch:  “One of them approached my husband. ‘We know who you are,’ he told him. ‘If you don’t want to register, no problem, but then don’t come to the sub-kebele and ask for your ID renewal, or for any other legal paper. We won’t help you. It’s up to you, now.” The following day the couple registered.

Pressure to Join the Ruling Party When Registering
Different sources across the capital confirmed to Human Rights Watch that alongside registration, voters were requested to sign a paper, under a heading “Supporter of EPRDF,” that included ID number, age, and address.

An Addis Ababa resident said, “There’s a lot of pressure for you to obey. They have your name, they ask you to sign. If you don’t, it means you’re against them. And they can come back to you whenever they want. At the end of the day, you just have to do what they force you to do.”

Pressure to Vote for the Ruling Party
Pressure to vote for the EPRDF appeared to take a number of different forms. Pressure was particularly acute among civil servants, people living in government-owned housing, and those living in poor neighborhoods.

An elderly resident living in state-owned housing said local government officials visited her house a few weeks before the elections asking to see her registration card. She said they wrote down her house number and told her, “We are going to check. And don’t forget to vote for EPRDF. We provide you the house, we can have it back.” She said that she was frightened by the threat and registered even though she had not intended to vote.

Civil servants are particularly pressured to vote for EPRDF, saying that ruling party officials remind them that it is the EPRDF government that employs them. Patterns of intimidation of teachers and others that were recently documented in Addis Ababa echo the examples previously documented across the country by Human Rights Watch in “‘One Hundred Ways Putting Pressure’.” For example, a teacher in a public school in Addis Ababa said: “A few weeks ago my headmaster called us all. He asked us to show him our registration cards. He wanted to know whom we were going to vote for as well. I refused. He harassed me and said, ‘You better get your card, and vote properly, otherwise after the elections you might lose your job.'”

Residents also described an EPRDF pyramid recruitment strategy called One-for-Five. A coordinator (ternafi) had to identify five recruits or fellow voters (teternafiwoch) among family members, friends, colleagues or neighbors. Coordinators then tried to compel their five signers to go to the polling stations and vote all together.

A woman in Aya Ulet area said, “A neighbor came to me. He said: ‘I know you voted for the opposition last time. Are you going to vote for them again? Do I have to report it to the kebele?’ I am a civil servant; I know that party officials and local administrators are the same thing. For fear of losing my job, the next morning I went to his place and signed.”

Pressure on the Media and Foreign Diplomats
Simultaneous with the increased pressure on voters, in the weeks before the polls the Ethiopian government of Prime Minister Meles Zenawi acted to restrict electoral scrutiny by independent media and foreign diplomats.

The government issued several codes of conduct covering media and diplomatic activity. Initial drafts of the media regulation restricted foreign and local journalists from even speaking to anyone involved in the election process, including voters on election day, in violation of the right to freedom of expression. Several journalists in different countries told Human Rights Watch that when they applied for media visas to cover the elections, they were extensively questioned by Ethiopian embassy diplomats.

The government told Embassy staff they needed travel permits for any movement outside of Addis Ababa between May 10 to June 20.

“The government has used a variety of methods to strong-arm voters and try to hide the truth from journalists and diplomats,” said Peligal. “Donor governments need to show that they recognize that these polls were multi-party theater staged by a single-party state.”

Repressive Context of the Elections
Since 2005, Human Rights Watch has documented patterns of serious human rights violations by the Ethiopian government. Members of the security forces and government officials have been implicated in numerous war crimes and crimes against humanity both within Ethiopia and in neighboring Somalia. The pervasive intimidation of voters and restrictions on movement and reporting are serious concerns for the integrity of the electoral process, but represent only one aspect of the Ethiopian ruling party’s long-term effort to consolidate control.

The EPRDF’s main instrument for stamping out potential dissent is the local administrative (kebele) structure, which monitors households and can restrict access to important government programs, including seeds and fertilizer, micro-loans and business permits, all depending on support for the local administration and the ruling party.

Since 2008 the government has also passed new laws to clamp down on independent civil society and the media. The Charities and Societies Proclamation restricts Ethiopian nongovernmental organizations from doing any human rights work, including in the areas of women’s and children’s rights, if they receive more than 10 percent of their funding from foreign sources. Since the law’s adoption in 2009, the leading Ethiopian human rights groups have closed most of their offices, scaled down their staff, and removed human rights advocacy from their mandates. The new regulatory agency established by the Charities and Societies Proclamation froze the bank accounts of the largest independent human rights group, the Ethiopian Human Rights Council. At least six of Ethiopia’s most prominent human rights activists fled the country in 2009.

Another law, the Anti-Terrorism Proclamation, has also been used to threaten with prosecution human rights activists and journalists for any acts deemed to be terrorism under the law’s broad and vague definition of the term. Several journalists also fled in 2009, including the editors of a prominent independent Amharic newspaper, and in February 2010 Prime Minister Meles acknowledged that the government was jamming Voice of America radio broadcasts.

Human Rights Watch urged the international election observer teams from the European Union and the African Union to take into account in their public reporting the insidious apparatus of control and the months of repression that frame the 2010 polls.

Ethiopia is heavily dependent on foreign assistance, which accounts for approximately one-third of government spending. The country’s principal foreign donors – the United States, the United Kingdom, and the European Union, which provide more than US$2 billion annually in humanitarian and development aid, – were timid in their criticisms of Ethiopia’s deteriorating human rights situation ahead of the election.

Human Rights Watch called on the principle donors and other concerned governments to publicly condemn political repression in Ethiopia and to review policy towards Ethiopia in light of its deteriorating human rights record.

“Ethiopia is an authoritarian state in which the government’s commitment to democracy exists only on paper,” said Peligal. “The question is not who won these elections, but how can donors justify business as usual with this increasingly repressive government?”