Calling New Election a confrontation for Melese’s new coming absolute power? Boycott would have been better than reelection demand … 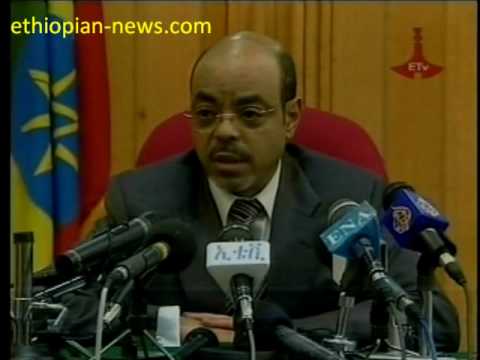 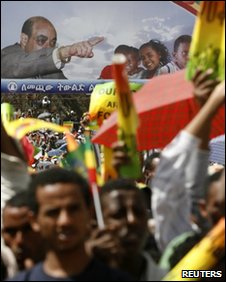 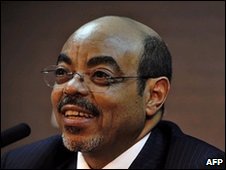 “Addis Ababa, May 25, 2010 Ethiopian People?s Revolutionary Democratic Party (EPRDF) is leading the 4th national elections by winning 499 of the 547 federal parliamentary seats, the National Electoral Board of Ethiopia (NEBE) Chairperson announced here late on Tuesday. In a news conference he gave here today, the Chairperson, Prof. Merga Bekana said partner parties on their part won 35 seats, according to provisional results reaching the Board. He said EPRDF won the election with a majority vote winning 499 seats. According to Prof. Merga, EPRDF won 38 seats in Tigray, 137 in Amhara, 178 in Oromia, 122 in South Ethiopia Peoples State and 22 seats in Addis Ababa. EPRDF partner parties on their part won 8 seats in Afar states, 2 seats in Benishangul Gumuz, 2 seats in Gambella State while winning 21 seats in Somali State, according to the provisional election results reaching the board. He said EPRDF won one seat in each of Harari state and Dire Dawa City Administration while its partners won the rest. Prof. Merga said Forum had won only one seat in Addis Ababa while a private contender won one seat in South Ethiopia Peoples State. He indicated that the Board has not received the result of 1 constituency from Amhara, 7 constituencies from Bensihangul Gumuz, 1 constituency from Gambella and 2 constituencies from Somali states. Prof. Merga thanked the public at large, election contending political parties, religious leaders, governmental and non-governmental organizations for helping make the 4th national elections successful, free, peaceful, fair and credible.”???

Ethiopia’s opposition leaders have called for a rerun of Sunday’s elections, saying they were flawed.

Head of the main opposition coalition Merera Gudina said he will not accept the results, which gave Prime Minister Meles Zenawi a landslide victory. 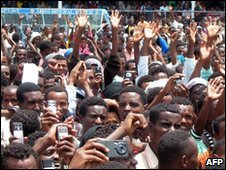 The EU and US have both criticised the polls, saying they fell short of international standards. Ethiopian officials have denied fraud.

Mr Merera, chairman of the Medrek coalition of eight main opposition parties, has called for a new election.

Earlier, another opposition leader Hailu Shawel had also called for a rerun of the elections.

The opposition has complained that its election observers had been beaten and driven away from polling stations in several regions.

Meanwhile, Mr Merera has said two members of his party were shot dead by security forces in the Oromiya region in the south of Ethiopia, Reuters news agency reports.

“The government is trying to prevent protests by massively repressing the people,” he said.

But a government spokesperson claims one man was shot when he stormed an office where ballots were being counted and the other was killed in self-defence by a policeman, Reuters says.

At a victory rally on Tuesday in the Ethiopian capital Addis Ababa, Mr Meles warned international observers to respect the election results, saying: “The people’s vote will not be overturned by foreign forces.”

According to the official election results, 499 out of 536 seats declared so far have been awarded to the governing party.

Medrek – which had been seen as the main challenger to Mr Zenawi’s party – has only won a single seat.

Ethiopia’s last elections, in 2005, were marred by violent protests over alleged fraud which left about 200 people dead.

At that time, Mr Shawel was leader of the opposition coalition and was jailed, along with several other opposition leaders, for his role in the protests.

Most of those jailed were later pardoned and released, although one opposition leader remains in prison.

The BBC’s Will Ross in Ethiopia says opposition leaders risk being sent to prison if they continue their protests, since in the eyes of the Ethiopian authorities, there is a thin line between rejecting the election results and inciting violence.

Mr Shawel says he will not call on his supporters to protest, reports AFP.

Mr Meles – who has been in power since 1991 – put Sunday’s election win down to an impressive track record, especially when it comes to economic growth.

The government has worked hard to improve infrastructure, especially in the urban areas, and social services such as healthcare have become more accessible.

Hailu Shawel, who heads the All Ethiopia Unity Party, must realise that his request for a rerun of the election is highly unlikely to be granted.

His other option is via the courts.

But he knows he must tread carefully as Ethiopia’s government may not tolerate much criticism.

In the eyes of the Ethiopian authorities, there is a thin line between rejecting the result and inciting violence and so the opposition party leader risks a return to jail.