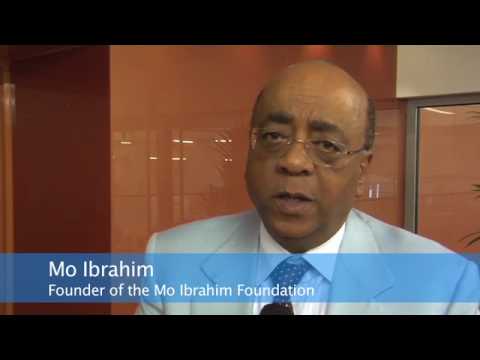 Mo Ibrahim rejected the African leaders  for second year  worthy of  any  prize, 2009 & 2010.  It  easier  to  make himself  Laureate than to find one from the African Dinosaurs. He was awarded the European Mercator Fund’s Raymond Georis Prize for Innovative Philanthropy, at the closing plenary of 21st EFC Annual General Assembly and Conference on 4 June  2010.

“Whether there is a winner or not, the purpose of the Foundation is to challenge those in Africa and across the world to debate what constitutes excellence in leadership.” (Mo)

Mo understood the true nature of African leadership and their  Banana Republics.  May 2010, the African leaders  acclamed the worst dictator  Melese Zenawie   has  claimed winning an election  with  a shameful  sliding victory of 99.6%. These  African leaders do not deserve any kind of prize but that of non governeace and treachery, if there is one.   The African leaders  are not even ashmed to see the froud commited   flagrantely in the capital of African Unity Addis Ababa ,  rather prefer to  endorse such a sham election.

“The Board respects the decision of the Prize Committee not to select a winner for the 2010 prize. The Prize Committee, which is independent from the Board, is a unique repository of experience and expertise.”

Melese Zenawie  of Ethiopia   and Beshir of  Sudan lost the the occasion to win the prize and prefer  the power  seat .  It seems Mo  is trying in vain to persuade the african dictators to let the power go  without success.

Melee & Beshir merit ike their model  Charles  Taylor  to visit the ICC than to be awarded any kind of Prize or lulled to leave power by Mo’s soft   methodology.

Mo would have found  a lot of candidate if  his foundation  change  its role and start giving  prize for the African dictators  longevity in powers.  Meles and  Mo’s  compatriot  Beshir  would have been the first to win, that                       ” would have opened”  Mo many doors around the continent’s corrupted regimes.

The world’s most valuable individual prize is not being awarded for a second year because no-one is deemed worthy of winning it.

Sudanese businessman Mo Ibrahim set up the $5m (£3m) prize for African ex-leaders to encourage good governance on the continent.﻿﻿ 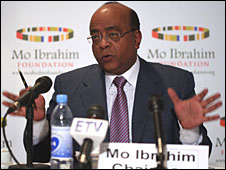 “The standards set for the prize-winner are high,” he said, adding that no new candidates had emerged since last year.

Winners must have been democratically elected and agreed to leave office.

South Africa’s Thabo Mbeki, Nigeria’s Olusegun Obasanjo and Ghana’s John Kufuor are among those who qualified for last year’s prize after stepping down in the previous three years.

“It is likely that there will be years when no prize is awarded. In the current year, no new candidates emerged,” said a statement from the Mo Ibrahim Foundation.

Mr Ibrahim argues that the prize is needed because many leaders of sub-Saharan African countries come from poor backgrounds and are tempted to hang on to power for fear that poverty is what awaits them when they give up the levers of power.

Botswana’s former President Festus Mogae won the prize in 2008 after two terms at the helm of one of Africa’s least corrupt and most prosperous nations.

The inaugural prize was given to Joaquim Chissano, Mozambique’s former president, who has since acted as a mediator in several