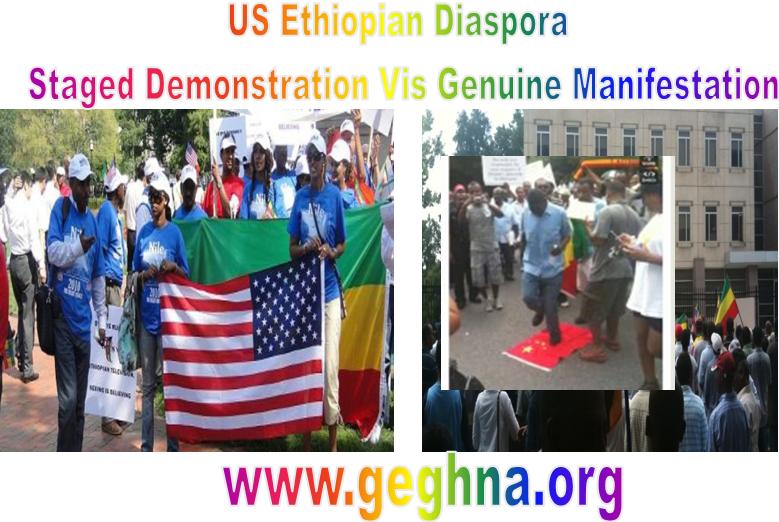 August 5, 2010 a manifestation was instigated and staged Demonstration in front of the White House and the State Department in Washington DC by a Dictatorial regime of Melese Zenawie from Addis Ababa. It is a first of its kind in any independent country’s government record to lobby US Government in front of the Oval House in such a shameless manor but the Ethiopian Dictatorial regime of Melese Zenawie. This is not a normal diplomatic Channel to address inter governmental issues. When it comes to US government there is the ambassador in Addis Ababa, or the African regional affairs head, in the last recur you can go to the under secretariat of the foreign affairs. However, the Dictatorial regime of Melese Zenawi for his declaration of War against Egypt by damming the Nile used his disarmed beleaguered weakened citizen to come out dressed in a blue T shirt with  pre prepared slogans. This is a shame for a country that has been independent for over 3 thousand years. A country that existed long before the 1st European put his feet in America.   It is put in stage by a government who boasts” winning 99%” of the vote in his recent rugged election, and supposedly has the support of its entire population. And it is not a proper channel to pressure the US government to act in its favor. The regime of Melese Zenawie acted as simple minority group inside the US asking to move the White House certain internal issue. Melese Zenawie proved his incapacity to discern where and when to act as an independent government but as a simple US internal pressure  group. Melese demonstrated as a simple satellite puppet regime with no existing out right decision making apparatus. The Dictator once he eliminated the opposition parties, he is left with no more true working political institutions inside his regime but mere executors around him. Left for himself the new Pharaoh of Ethiopia forced his exiled Diaspora who escaped his regime’s atrocity to stage demonstration. These days Ethiopians seems not in peace at home and in Diaspora. Many were forced to go for the demo left with no choice but to be a puppet for a puppet regime. The regime is exporting its ideologies of hate  even in the streets of  Washington DC.

The next stage of the Ethiopian Dictatorial regime would be to export group fighting and Kampala’s world Cup type indecent even in the US streets, or in one of the many Ethiopian restaurants who were apparently were  targeted  as many feared  would have  taken  place as a revenge of a  worst dictatorial war mongering regime infected by Somalia Syndrome. The whole world was waiting to see the confrontation between those anti Ethiopian Dictatorial Regime groups manifesting in front of the Chinese Embassy at the same moment of staged demonstration in front of the White House. Gladly the situation was controlled by the security forces not to mix both groups. The result would have been chaotic. We hope the US government will consider not allow the same staged foreign regime manifestation and public demonstration of the Ethiopian oppositions to take place in the same day and on the same place. And to in force the government of Dictatorial regime of Ethiopia to use the proper channel rather than staged demonstrations. The government must be or be allowed to occupy the streets and the the arena of state at the same time extrapolating the democratic environment in the west.  This will risk the lives of innocent civilians. The government of Ethiopia prohibits anti government manifestation in Addis Streets rather prefer to export to the US.   A regime    cannot be in exile and in government at the same time, risking the safety of those living in US as a genuine refugee. 3.      Cease its support for tyranny in Ethiopia/Africa

4.      Cease its support to Meles Zenawi’s regime in jamming the Voice of America,

5.       Respect the human rights of the Ethiopian people,  Ethiopian  workers employed  in Chinese owned projects  in accordance with accordance labor and environmental standards as well as the Universal Declaration of Human rights.

6.       Stop bribing and corrupting Ethiopian officials to get no bid

The U.S. gives about $1 billion annually to Ethiopia. But even as U.S. and other international aid has surged in the last decade, activists charge that the government has become more authoritarian.

Reporting from Addis Ababa, Ethiopia — Like many in the West, former U.S. Ambassador to Ethiopia David Shinn watched the country’s recent elections for signs that democracy was finally taking root.

When the results of the May vote were announced, all but two of 547 parliamentary seats went to the Ethiopian People’s Revolutionary Democratic Front, the coalition that has been in power here for nearly 20 years, or its allied parties.

“How do you win 99% of the vote?” Shinn said. “That’s un-American.” And yet, he said, “Ethiopia remains a darling of the donor community.”

The U.S. gives about $1 billion annually to Ethiopia, more than to any other country in sub-Saharan Africa except Sudan. But even as U.S. and other international aid to Ethiopia has surged in the last decade, activists charge that the government has become more authoritarian.

Prime Minister Meles Zenawi’s government has won a degree of favor from the West for sending troops to fight radical Islamists in neighboring Somalia, but reports of rights abuses and a string of draconian laws that have constricted political space have put donor countries in an awkward position.

“It’s a dilemma for the international donor community, which doesn’t want to walk away from Ethiopia because the needs are so great,” said Jennifer Cooke, the director of the Africa program at the Center for Strategic and International Studies.

A March report by Human Rights Watch alleged a countrywide pattern of local government leaders denying aid to opposition supporters. Eligibility for many major aid programs is determined by local government officials — almost all of whom belong to the ruling coalition or its affiliates.

One former Ethiopian aid worker, who didn’t want to be named out of fear of government retribution, told The Times that aid is leveraged by local leaders to consolidate power.

“Aid is a tool for development,” the aid worker said. “It is also a tool for politics.”

Ethiopian officials deny such claims. Communications Minister Bereket Simon said Human Rights Watch was “engaged in the continuous fabrication of allegations” and said Ethiopia “has put in place a transparent mechanism for the distribution of food aid.”

But Western donors appear to be taking the allegations seriously.

Claims that aid programs had fallen victim to political distortion prompted an investigation into U.S.-funded food programs in seven local districts in December 2009, said an official with the U.S. Agency for International Development.

The probe “found no indication of political discrimination,” the official said.

A report released last week by a consortium of donors that includes the U.S., several European countries and the World Bank conceded that Western aid programs would benefit from more transparency and independent monitoring.

The Donor Assistance Group report said donor countries would work with the Ethiopian government “for continued strengthening of safeguards” against fraud.

Africa experts agree that walking away from Ethiopia is out of the question.

Almost a sixth of Ethiopia’s 85 million people depend on food aid. In an added geopolitical dimension, twin bombings in Uganda last month by the Al Qaeda-linked Somali militant group Shabab underscored the importance of having U.S. allies in the troubled Horn of Africa.

Ethiopia’s rise to “donor darling” is due in large part to its savvy leader, Cooke said.

Meles, the former Marxist guerrilla leader who has ruled Ethiopia since 1991, “is good at talking the donor speak and the rhetoric of development,” she said.

Hailed by former President Clinton as part of a new generation of African leaders who would bring stability to the continent, Meles was invited to sit on then-British Prime Minister Tony Blair’s Commission for Africa in 2004.

The commission argued that economic growth and democracy would come to Africa only after hunger, poverty and the spread of disease were stamped out — an expensive proposition that required a “big push” of new aid.

The year after he was named to the commission, security forces loyal to Meles killed nearly 200 people who were protesting that year’s election and arrested tens of thousands of opposition supporters, including Birtukan Mideksa, an opposition leader who is now serving life in prison for violating the conditions of a 2007 pardon.

The U.S. has been cautious in its criticism, although some say the Obama administration has been taking a tougher tone. In May, a top U.S. diplomat said the recent elections “were not up to international standards.”

Meles bristles at such statements and has suggested that Ethiopia could forgo its dependence on Western aid for a closer relationship with China, which has lent money for a dizzying number of development projects in recent years.

“If [the U.S.] feels the outcome of the elections are such that we cannot continue our relationship,” he warned in May, “that’s fine and we can move on.”