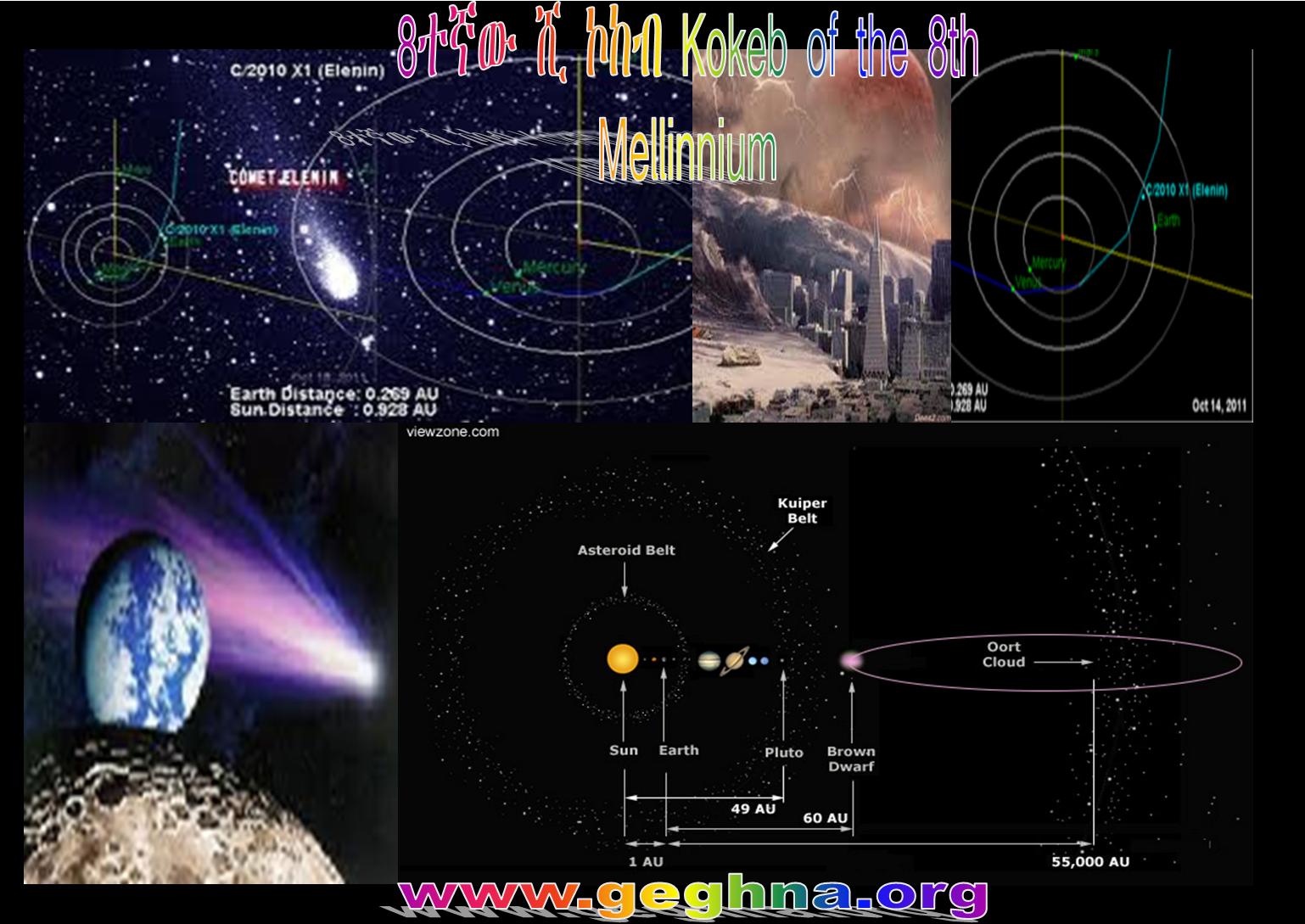 In the Ancient Geez ( Ethiopic) the language of the ancient   Abyssinian astrological Codex,   known as Awede Negest,   Kokeb is a star body rather than Moon or Sun or a planet or comet. This is one of the kokeb that is waited to arrive to words our earth on September 11, 2011 on the     Ethiopian Enoch’s (ሄኖክ)*   calendar New Year. The Ethiopian calendar is predates that of the ancient Egyptian with certain similarities to the Copts by error it is called Julian calendar too. That day it will be September 1, 2004 seven year and eight months behind the Gregorian calendar, when our planet will be close to the Star. It is a calendar made by the ancient Abyssinian star gazers.  Ethiopia is located inside the tropics and is the closest place to the sun than any where on earth for   observing the sky in the naked eye.   Ethiopians of old times were raised up studying heavens  from plate of water or hole filled with water on the ground than looking up  though a telescope.

The 2and important date  11/11/2011 of Elenin  falls  significantly on the  1st  date of the Ethiopian 3rd month  Hedar 1, 2004 having a great sign in the Abyssinian astrological  book  Awede Negest. In Ethiopia is counted the 8th millennium though the dictatorial regime try to reduce it to two  millennium thus confusing the population not to follow the stars.

On that day the “Comet”    known to the ancient will   cross the ecliptic on line up with Mercury, the Sun, and the Earth.  It  will be getting close to Earth’s  proximity  that its orbit will reach during its turn around the sun.  The Russian astronomer Leonid Elenin in December 10, 2010 observed the “Comet” which he gave his name.    Many claimed NASA knew it earlier and kept in silence to keep the excitement down.

9/11/11 is the date of the arrival “Comet/ planet /star/” of Doom or Gloom is not   Hoax   but rather   a scientific fact recognized by many astrophysicists and   NAZA.

When the Kokeb was  first discovered in December 20 last year, there was no concern of it coming close enough to the Earth the path  seems to be getting closer to Earth than they originally projected, could there be a Comet Elenin Collision Course with Earth?

Most of the astrophysicists and NAZA have identified the current path of Elenin with some degree of accuracy.   Though the length of time to complete its ellipse is not so well defined but based upon one set of data, Elenin s period could be 11,000 years. Solar and Heliospheric Observatory SOHO – is a specific spacecraft that was created to observe the Sun, a cooperative between ESA (European Space Agency) and NASA. SOHO   has been observing Comet Elenin   for a while.

.  According to Hopi’s prophecy, the Blue Star Kachina acts as a warning, an alarm bell that announces the imminent arrival of the Red Star Kachina. The story is about the cyclical nature of life; it is a story about humanity forgetting to remember its purpose; it is a story of destruction and purification; it is a story repeated a thousand times throughout history; and as always, it is ultimately a story of renewal.

The Sumerians  6000 years ago referred to an ancient planet called Nibiru, the 12th planet of our solar system. It was a rogue planet, causing havoc in our solar system as it passed through because its orbit was in the opposite direction of the planets. When it appeared, it did so in the shape of a red cross in the night sky before flipping the Earth’s poles.

Nemesis of the Greeks ?

The theory of a companion sun is not new. It has often been described as Nemesis, after the Greek figure in mythology.

The mythological Nemesis was the spirit of divine retribution against those who succumb to hubris, vengeful fate personified as a remorseless goddess. The name Nemesis is related to the Greek word meaning “to give what is due”.

Nemesis is now often used as a term to describe one’s worst enemy, normally someone or something that is the exact opposite of oneself but is also somehow similar. For example, Professor Moriarty is frequently described as the nemesis of Sherlock Holmes.

“Opposite yet similar” is the perfect description for a companion to our Sun. But the name Nemesis also implies a sinister nature. Will this new Nemesis be beneficial or harmful to our lives?

“Scientists at places like NASA and famous observatories have deflected inquiries about the discovery for a few years now, mainly because they feared being associated with these “fringe” theories. But like it or not — it has happened. Well… according to a team of Spanish artronomers who call themselves the StarViewer Team.

The group made the rounds of all the news web sites in the past two weeks, claiming they discovered something very significant. It’s almost twice the size of Jupiter and just beyond our furthest planetoid, Pluto. Although it’s not a planet, it appears to have planets or large satellites encircling it. It’s what astronomers call a “brown dwarf star” and its official name is “G1.9″.”

Concerning Elenin  little is known about this comet because of its relatively recent-discovery status, therefore, information regarding its size, mass, and orbit still vary widely or are missing altogether due to a lack of observational data. Still, astrophysicists have been plugging away at Elenin ever since it was discovered last year.

NASA’s Jet Propulsion Laboratory has an interactive diagram of Elenin’s orbit with the known information about the object plugged into variable positions. What is known is that Elenin is scheduled to make its perihelion turn around the sun in August of this year [2011]. Shortly after making its u-turn, Elenin will perform a fly-by of Earth, coming within 21,000,000 miles of Earth.  As a point of reference, the moon is roughly 240,000 miles from Earth.

Space distance is measured in astronomical units [a.u.], with 1 a.u. being the distance from the Earth to the sun. Elenin is currently estimated to pass within 0.24 a.u. of Earth after it makes its turn around the sun it suppose to begin heading back out into space.

The ecliptic is a horizontal field created by the planets and sun orbiting on a relatively flat plane. Many of these long-period objects do not travel along the ecliptic plane. They either come up from below the ecliptic, cross the ecliptic, or travel out above the ecliptic plane, or they do the opposite. As many astrologist though about planet X making havoc to the earth

*An Enochian year is completed in 364 days, Enoch 82:4-7 and Jubilees 6:23-28. More precisely, a 365-day-solar-year and the 365-year-solar-cycle appear as a 365-days-and-years single term. From the three books of Enoch, a curious 364-day length of calendar year lends new insight by reserving the last day of the solar year.  *65 is the year Enoch lived on earth before transfiguration according to the Bible.