We Accuse !! Justice delayed is Justice Denied. We Accuse !!”Sir” Bob Geldog” and “PM” Melese Zenawie the twin criminals :-A regime which came to power through the arms of famine will fuel & entertain famine to maintain power 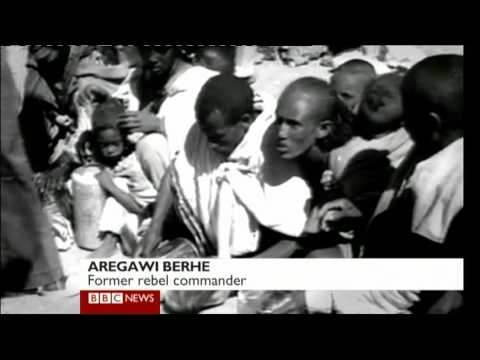 In 1984  they  cheated the world  on the name of famine one  to power  the other to be rich and famous.  If there is international justice they  must face right  now.

We Accuse over  the death of  over a Million Ethiopians;

We Accuse robbing the food  & money which  was destined for the starving millions;

We Accuse buying arms with the Band Aid money and enriching oneself  fraudulently;

We Accuse since they continue to this day cheating the  whole world on the name of the dying  Ethiopian/African  dry bones.

They must  be stopped immediately…

We accuse “Sir” Bob Geldog” and “PM” Melese Zenawie the twin   criminals  to the international community :- When Humanitarian Aid Winds Up in the Wrong Hands TIME

British rock impresario and Africa aid promoter Bob Geldof, a.k.a. “Saint Bob,” was back in the headlines this past week after blowing his stack at the BBC for a story it aired alleging that Ethiopian rebels had diverted 95% of the $100 million in Ethiopian famine relief raised in the mid-1980s — much of it by Geldof’s iconic Band Aid concert.

Melese Shamefully tries to deny that he robbed himself to power and he is responsible for 1984/5 million death only 5% of the money  from Band Aid arrived for hungry the rest 95% were used to buy arms.  From the 95% the lion share went to the fiscal paradise around the world and  still lingushing to these days. He rejected  the facts, but  the truth is after  him it wont be long before he pays for his crime….

Stung by BBC allegations that Live Aid money was spent on weapons, Meles Zenawi tells Paul Vallely that the report is based on lies Tuesday, 9 March 2010

Meles Zenawi denies that most of a $100m donation was spent on armsThe prime minister of Ethiopia has stepped into the row between Sir Bob Geldof and the BBC which has claimed that 95 per cent of the $100m aid raised, by Live Aid and others, to fight famine in rebel-held northern Ethiopia in 1985 was diverted to be spent on weapons.

Meles Zenawi, who was one of the leaders of the rebel group the Tigrean People’s Liberation Front, is now the country’s Prime Minister. In an interview with The Independent he said that the BBC had fallen for lies put out by his political opponents on the eve of a general election in Addis Ababa next month.

“The notion that a decision was taken to spend 95 per cent of aid on the military is a complete lie,” he said. “Anyone who knows anything about the situation in Tigray in 1984-85 would know that. The logic of that would be just ridiculous.”

The rebels were then fighting the army of the Mengistu dictatorship whose troops were mainly conscripts who often ran away and abandoned their weapons when fighting began. “We captured large amounts of guns and tanks. We did not need to buy arms. What we needed was food. So why would we sell food to buy arms?” Mr Meles said.

“We needed food because by 84-85 we had an extensive liberated area under our control. But it was terribly hit by famine. The danger was that the population, on whom we depended, would leave the liberated area and go over to the government area in search of food. So we needed the food to keep our people in our area.

The BBC yesterday insisted it was standing by its story. It issued a statement that said: “Aregawi Berhe, the TPLF military commander in the mid-1980s, told the programme that the relief society connected to the TPLF received about $100m and that a decision was made that only 5 per cent should be spent on helping famine victims. The balance, he said, was used to fund the TPLF and a linked political party. The programme made clear that the assertion was made by a once high-ranking TPLF figure, now in exile.”

The Ethiopian Prime Minister offered some telling detail on timing. “When the planting season arrived we encouraged all the able-bodied to go back to plant. That was the summer of 1985. That was when the cross-border feeding operation began in earnest. The only significant amounts of aid going across the border from Sudan were in that period.”

Significantly, that was a year after Aregawi Berhe had left the area. It was also a year after a photograph was taken showing a Christian Aid worker, Max Peberdy, buying grain from the second rebel quoted by the BBC, Gebremedhin Araya, who claimed he had duped Christian Aid by selling them sacks full of sand. “Gebremedhin Araya was not the head of finance of the TPLF, as has been claimed,” Mr Meles said. “He was in no leadership position. He was just a paramedic.” Christian Aid yesterday disclosed that Mr Peberdy had also left the area a year earlier.

Five other leading aid agencies have criticised the BBC report. Oxfam, Save the Children and Christian Aid were yesterday drawing up a joint complaint. Band Aid’s lawyers were preparing an official complaint for the broadcasting standards watchdog Ofcom.

Charities in uproar at claims that donations were spent on weapons

Bob Geldof and the Band Aid trust are to report the BBC to the broadcasting regulator Ofcom over a World Service report that millions of pounds raised for famine victims in Ethiopia in 1985 were actually spent on weapons.httpvhd://www.youtube.com/watch?v=tFPr-zAXNuc

A group of Britain’s most respected agencies – including Oxfam, the Red Cross, Unicef, Christian Aid and Save the Children – are joining Band Aid in writing an official complaint to the chairman of the BBC Trust, Sir Michael Lyons.

They are to complain of the “false and dangerously misleading impression” created by a report by the BBC World Service’s Africa editor, Martin Plaut, which alleged that 95 per cent of the $100m in aid which went to the northern province of Tigray in 1985 had been diverted for military use by the rebel forces which held the area.

A draft of a letter written by the agencies, seen by The Independent, speaks of “disgracefully poor reporting by the BBC which “relied on dubious sources and rumour” and which was “designed to leave an overall impression that the vast majority of resources raised by aid efforts in the mid 1980s largely went on buying arms”. In a clearly angry tone the agencies say: “There is not in fact a shred of credible evidence that this happened. There is overwhelming evidence that tens of thousands and even millions were saved by these efforts, which were in fact spurred by reporting by the BBC.” The draft concludes: “How the quality of the BBC’s work then contrasts with the quality of this specific story now.”

The story, which went out in the World Service’s Assignment programme – and in a shorter version on Radio 4 in From Our Own Correspondent, as well as on the BBC website – relies on the testimony of two former senior Tigrean rebels. The most senior, Aregawi Berhe, a one-time commander in the rebel army, was expelled from the guerrilla movement in the summer of 1985.

“He therefore not only had a political axe to grind against his former colleagues but he wasn’t even in Tigray at the time,” said Sir Bob Geldof last night, “so he could not have witnessed these alleged transactions”.

The anti-poverty campaigner, who raised $144m for Africa in the Live Aid concert in 1985 – which was spent in six different countries – accused the BBC of “wilfully naive reporting”.

“This is a Ross/Brand moment in BBC standards for me,” Sir Bob said. “This story has gone around the world on the internet and created a totally false impression of what actually happened. At the time of Live Aid we had journalists crawling all over everything we did trying to find something wrong – and they couldn’t.

“And now, on the strength of one disgruntled soldier, the BBC has undermined the faith of ordinary people across the world in the effectiveness of giving to people in their hour of need. It is a disgrace.”

It was not just the volatile campaigner who was incensed. The BBC story was “outrageous and very damaging,” said Nick Guttmann, director of emergency relief operations at Christian Aid .

“It is palpable nonsense,” said Phil Bloomer, director of Oxfam’s campaigns and policy division. “The idea that 95 per cent of aid was diverted is beyond belief. We know because we bought the food, we bought the trucks, we took the food in, saw it distributed and then we drove the empty trucks out.

“You have to ask what is the motive of those behind these claims, made by political opponents of the Ethiopian Prime Minister as an election approaches in Ethiopia,” he added.

“And you have to ask why the BBC seems to have been prepared to run with these extraordinary claims about our work without even putting in a call to Oxfam before they were broadcast.”

“We’re not utter fools,” said Mr Bloomer. “We’ve worked for 60 years in some of the most difficult situations in the world with the extremes of human behaviour and have systems in place to safeguard against diversion.”

A former British ambassador to Ethiopia, Myles Wickstead, added weight to the aid agencies’ condemnation last night. “I’d give no credibility whatsoever to the idea that 95 per cent of aid to Tigray was diverted,” he concluded.

“It was too highly monitored, most particularly that of Live Aid. Some money may well have gone astray in Ethiopia in 1985. But nowhere nearly on the scale which the BBC has alleged.

Response: The BBC was right to report claims of aid abuse in Ethiopia | Comment is free | The Guardian

Bob Geldof rages against the “thoroughly discredited BBC World Service programme that claimed that nigh on the entire humanitarian relief effort by all aid agencies during the Ethiopian famine was diverted to arms” (My rage at this calumny, 10 March).But the BBC report was not specifically about Band Aid. Nor does it discredit the World Service to report on international aid deliveries during the Ethiopian crisis of the 1980s. The real issue is about the way humanitarian assistance to victims of war and famine was – and still is – manipulated by all sides, whether rebel or government.