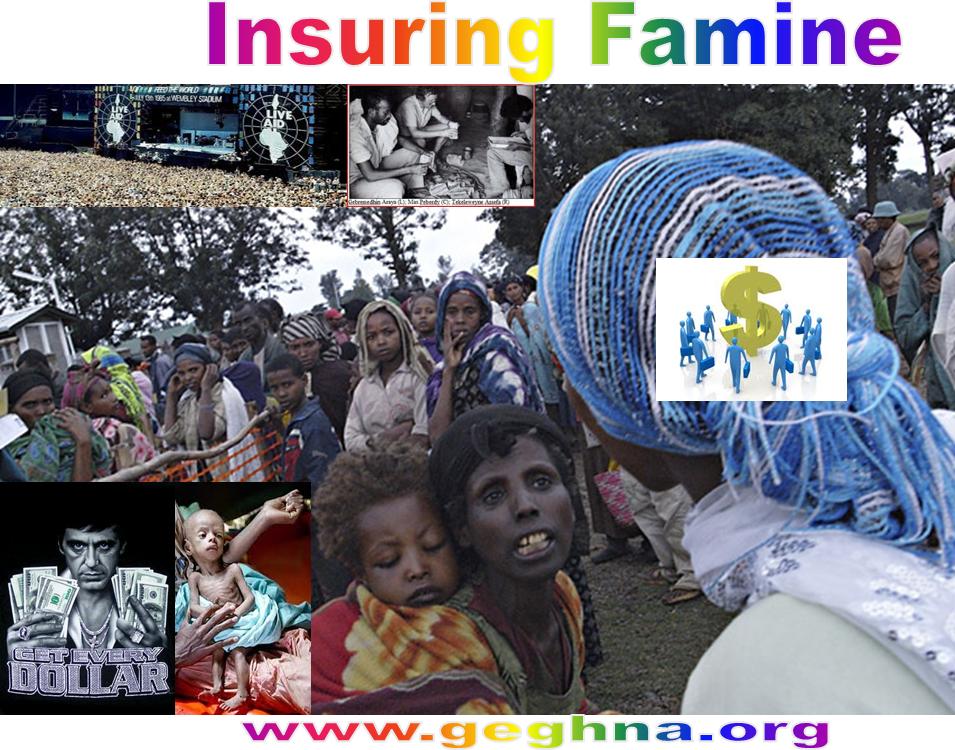 The World Food Program  WFP has  wrongly believed that  the so called famine assurance is   the way out from drastic famine in Ethiopia. In contrary to Band Aid’s  mid 80’s unsuccessful direct aid approach,   WFP   engaged a  business type marketing methodology by Insuring against hunger  (IAH). This  supposedly  in turn eradicate     famine  from the the Horn of Africa nation by  stopping   from arriving chronically  by  taking out weather insurance policies on behalf of  starving subsistence farmers.”   Even weather in the horn of Africa is impressible. WFP wrongly advocates this will end the ad hoc nature of aid thus working against  a  government  merely surviving through famine aid even from its inception in  the famine camp during struggle in 1980’s. Insuring against hunger  (IAH) is a timely profit making  on the name of  food Aid in Ethiopia. Starting   from Band Aid  who  did not try to make money on the name of the starving in Ethiopia ? And  IAH will not be a new phenomenon for the Ethiopian starving dry bones.  According to IAH group ,  the program is effective  by indexing the assurance of famine to the Ethiopian  weather variations which turn  triggers  the so called  payouts for the starving population.  Since  the most destructive variance occurs early in the growing season, the so call assurance money making  assessment can take place well before the harvest how much money its will make.  As the confirmed by IAH itself   the pastorals are not assured since there  is no predictable rain fall in the pastoral areas that is the reason given by the IAH. The truth is that the  pastorals does not own land and they are nomadic types,thus one could not grab their land in case of a catastrophe or non payment. While the settled ones  IAH could easily take   over their land  and make them a slave worker in their won farms with the help of  dictatorial regime of Melese Zenawie . The so called promise for the future ” remote sensing of vegetation to include pastoral areas ” is just an empty promise. It has been over 5 years now nothing has been done (2005). The pilot IAH has a tribal and regional profile in Ethiopia, since it has been  selectively done in region 1 the region of the ruling  dictator.

Can commercial practices like risk management prevent famine? This the Question to the  new manager of the World Food Program  who thinks so and is turning to business to revolutionize aid, we are addressing ?

Could World Bank  finance over 80% of the population in Ethiopia,   who are farmers from the population of over 80 Million to be  assured by the future donation when famine strike?

One thing is sure that as we have  seen in the last three governments in (Imperial, Communist, Irridentist) type of government in Ethiopia   famine has  struck and is striking and will strike a Ethiopia unfortunately. As consequence the Wold Bank and  WFP  better index not on the weather but on the famine itself,  if IAH group are  investing to make money in Ethiopa.  So the IAH will be sure of its bit. The assurance company will be well assured then rather than indexing the climate,  since the weather is not the problem in Ethiopia today. There is ample of rain but there is still famine.

The only way to eradicate the Ethiopian famine is to establish a democratic system of government with a free press and democratic uncorrupted institutions as proposed by  Nobel Prize laureate Amartya Sen. This is the only way out with out we have to stop  betting around the bush and all effort to stop famine in Abyssinia is a nightmare with a dictator on power.

The theory set by Amartya Sen is the best solution for Ethiopia:_

“It is, thus, not at all astonishing that no substantial famine has ever occurred in any independent country with a democratic form ofgovernment and a relatively free press. Large famines have occurred in authoritarian colonial regimes (as in British India), in repressive military regimes (as in Ethiopia or Sudan in recent decades), and in one-party states (as in the Soviet Union in the 1930s, in China during 1958-61, in Cambodia in the 1970s, or in North Korea in very recent years). Even though the proportion of the national population that is affected by a famine rarely exceeds 10 per cent, which may be electorally unimportant, yet public discussion of the nature of the calamity can make it a powerful political issue.”