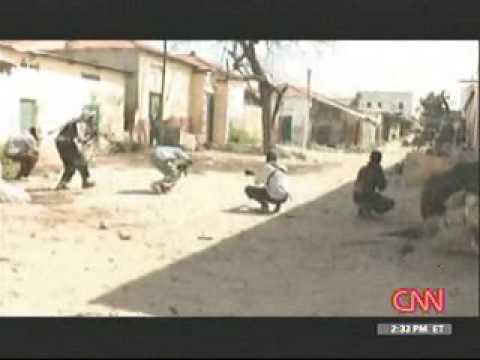 A look back at the troubled relations between Ethiopia and Somalia – made worse in recent years by Ethiopia’s deep distrust of Somalia’s Islamist groups.

Somali eye-witnesses report that Ethiopia troops are digging into positions near the border, following advances by Islamist fighters. Ethiopia denies the claims.

Ethiopia announces that its troops will leave by the end of the year.

Ethiopian troops supposed to start pull-out under peace deal but no sign of withdrawal in Mogadishu. At least 15 people killed in Islamist attack on the capital.

President Abdullahi Yusuf admits that his Ethiopian-backed government only controls parts of Mogadishu and Baidoa.

Government and moderate Islamists promise to implement a ceasefire and say Ethiopian troops will start to leave.

Somali government troops, supported by Ethiopian troops, seize the southern port of Kismayo – the last remaining stronghold of the UIC

Forces loyal to the transitional government are reported to have taken control of the town of Burhakaba from the UIC. Other areas of southern and central Somalia are also said to have fallen under heavy assault from Somali and Ethiopian troops. Retreating Islamist militias are attacked by Ethiopian jets for a third day.

Ethiopia for the first time admits its forces are fighting in Somalia, saying it has launched a “self-defensive” operation against Islamist militiamen. Fighting spreads across a 400km front along the border.

Islamic courts give Ethiopian troops one week to leave Somalia or face a “major attack”.

Islamic courts say they have engaged in battle with Ethiopian troops for the first time – south-west of Baidoa.

Ethiopia’s parliament passes a resolution authorising the government to take all legal and necessary steps against what it terms as any invasion by the UIC.

Eyewitnesses say Islamist fighters ambushed an Ethiopian convoy near Baidoa, blowing up a truck. The UIC claim some 20 Ethiopians died.

The Islamic court leadership orders a “holy war” against Ethiopians in Somalia.

A column of Ethiopian trucks, more than 100-strong and including armoured cars, are seen crossing into Somalia. Ethiopia only admits to having military trainers in the country helping the interim government.

The Islamic courts take control of the Somalia capital, Mogadishu, from rival warlords and go on to gain territory in much of southern territory.