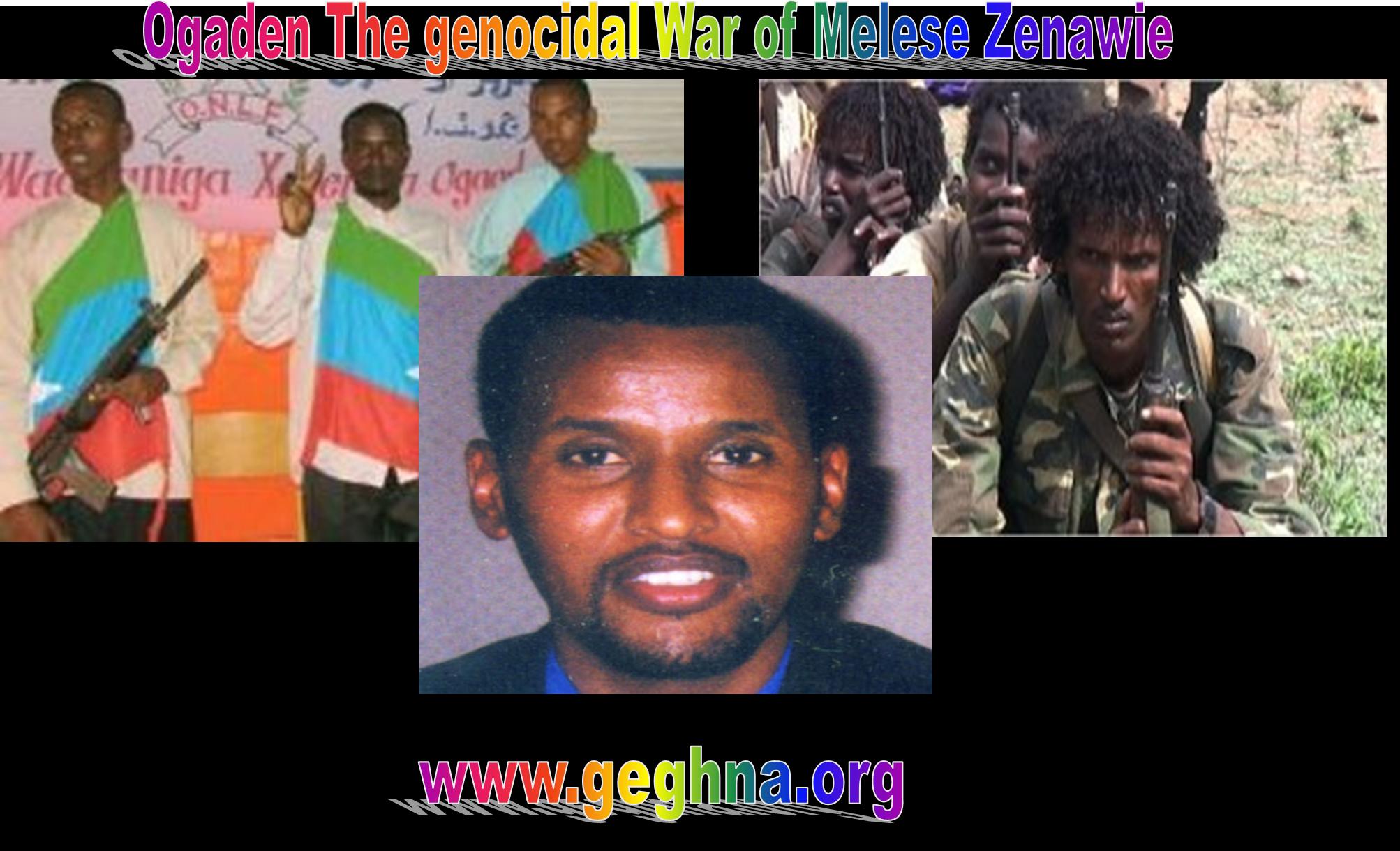 The illusive so call peace  with ONLF (Ogaden National Front), and the government of the genocidal regime of Melese Zenawie of Ethiopia  claimed has liberated all the prisoners of ONLF proved farce. In reality the true ONLF is still fighting the regime. The so called “ONLF” that strike  a peace deal with Melese Zenawie is the proxy movement made and prepared by dictator for local and international consumption to prove that the war and the genocide in  Ogaden   region is finished. This game is to assure the international oil drillers the safety of the regions. The resent declaration of the True ONLF from Landon and the continual imprisonment of its member the Canadian Ethiopian Bashir Makhtal who was betrayed by the corrupted Kenyan police and given to Melese Zenawie proved and  divulgated the reality. Whenever any dictatorial regime declares  peace with anybody that means the war continues. It is proved in Somalia and with his Brother in Arm  Eritrean Shabia.

The true lasting peace will come when the genocidal regime of Melese Zenawie is swept away by Human social Tsunami that blow the Tunisian dictator Ben Ali.
The recent Bashir Makhtal’s letter smuggled out from the most notorious African prison describes his anger on the Canadian government letting him languish since he is black and African.  The Canadian in prison proved that the federal government in Ottawa plays double standard at home and with Ethiopian regime.

The letter, which was smuggled out of an Ethiopian jail, will be released at a news conference in Ottawa 22 January, 2011, a Memorial Day Makhtal’s rendition by the Kenyan corrupted official to Ethiopia dictator repeating the same crime they committed with   that of   the Kurdish PKK leader Abdullah Ocalan PKK to Turkey.

“I am writing to tell my fellow Canadian citizens that I am a hostage for an African country which receives millions of dollars of the taxes you paid from our government as humanitarian aid.” (Mikhtal’s Prison Letter)

This will not solve the “Somali Question» neither in Kenya nor in Ethiopia like that of the “Kurd national Question “. In both cases the war and the killing continue.

The Kenyan ICC Killers are known for putting oil on the fire so long as they are paid. Their time has come to face The Hague to International Justice for the Crime against humanity for the mass killings they committed against the innocent Kenyan in 2007 election.

Makhtal was condemned a life sentence in a prison in Addis Ababa refusing the deal he was offered by Melese Zenawie regime to denounce ONLF. He was charged with multiple counts of terrorism for allegedly being a ringleader with the Ogaden National Liberation Front.

The Ethiopian dictator punishes families to three generation for the role of his father Makhtal’s grandfather, Makhtal Dahir, was one of the co-founders of the organization.

In his letter  Maihtal understood that being born in the Horn of Africa makes you any way guilty for generation at home and in Diaspora:-

“I am an innocent civilian on the death row … I am guilt(y) by birth,” he writes.

Makhtal had returned to Africa and started a successful second hand clothing business in 2002, where he got caught while running from the invading Meles Zenawie regime on Somalia Kenya border  in 2006 fleeing  with all the refugees.

The Kenyan corrupted police, the day before his court appearance, sold him to the Ethiopian regime.  The day the tribunal he found himself on the way to Addis Ababa. The Ottawa government did not act at all while other nationals are being freed son after.

Makhtal explains his ordeal in the notorious prison in the following wise: _

“I share a room with real criminals, rapists and murderers with whom I share the same fate — death. I lost my optimism that one day I will walk free, and my dream to join my beautiful wife, a heartbroken, innocent lady is not there anymore. I am in mourning for my previous free days and my stolen future.”

The Ethiopian regimes so-called “peace deal” with the Ogaden branch of the now defunct Al-Itihaad Al-Islaami (AIAI) organization known as the United Western Somali Liberation Front (UWSLF) has no impact on facts on the ground in Ogaden and represents an attempt by the regime to promote the idea that a non-existent peace process is underway in Ogaden.

The so-called UWSLF was created to act as the Ogaden chapter of the AIAI organization. Its ideology and methods were counter to the interests of the people of Ogaden and were therefore rejected by the people. USWLF assisted by external elements sought to establish a functioning presence in Ogaden during the last few years but failed to do so. When UWSLF sponsors ceased to provide financial and material support for the AIAI affiliate, the leadership of the UWSLF was left with no option but to surrender to the Ethiopian regime. The regime saw this as an opportunity to forward the impression that it was pursuing a legitimate peace process and making significant security gains in Ogaden in order to alleviate the fears of potential investors in the oil sector and also out of increasing concern over persistent accusations that the regime is engaged in collective punishment, war crimes and crimes against humanity in Ogaden.

Promoting a fictitious peace process with actors having no impact on facts of the ground in Ogaden, and potentially other conflict areas in the future, is also part of the regimes strategy to deviate attention from the most recent stolen election in Ethiopia in which the regimes ruling party and its allies illegitimately secured 545 out of 547 seats in the national assembly.

The Ogaden National Liberation Front (ONLF) wishes to make clear to all interested parties that the UWSLF has no constituency in Ogaden nor does this so-called “peace agreement” with the Ethiopian regime impact in any way facts on the ground in Ogaden. The ONLF wishes to further affirm that any legitimate peace process aimed at reaching a just, comprehensive and lasting political settlement to the conflict between the people of Ogaden and successive Ethiopian regimes can only be achieved through an internationally mediated process, taking place in a neutral venue.

The Ethiopian regime continues to refuse international mediation of the conflict and has therefore pursued bogus so called “peace agreements” with entities that are either non-existent or have no constituency in order to create the impression that there is a peace process underway in Ogaden.

The ONLF wishes to affirm once again that there is no peace process underway in Ogaden and that
statements to the contrary by the Ethiopian regime are a diversionary tactic by the ruling Tigray Peoples Liberation Front (TPLF) party.